Rosette ANDAY was born as Piroska Andauer in Budapest on December 22, 1899. She was a child of the Jewish couple Elvira (Ella) Andauer neé Holländer and Ludwig Andauer.

On April 4, 1900, an obituary notice appeared in the German-language daily Pester Lloyd (Budapest). In it, the widow Ella Andauer informed the public in her own name and on behalf of her child Piroska about the sudden death of her husband Ludwig Andauer and his burial in the new Jewish cemetery.

In September 1921 Piroska Andauer, who had studied violin and singing in Budapest, was engaged at the Vienna State Opera, jointly directed by Franz Schalk and Richard Strauss. To the astonishment of the music critic of the Neue Freie Presse, the young debutante got the title role in Georges Bizet’s opera Carmen, which was already a crowd magnet.

The young debutante at the State Opera, who was dubbed »Fräulein«, was now sure to have a major career. As an artist she called herself Rosette ANDAY and claimed to be even younger with a fictional birth year of 1903 (which would have made her only 17 rather than her actual 20).

Ten months after her first appearance in Vienna, on August 15, 1922, she made her debut at the Salzburg Festival as »Dorabella« in Mozart’s Così fan tutte:

As a second charming girl, Miss Anday (Dorabella) also performed at an equally admirable artistic level and showed that scene by scene as much with her deliberately flirtatious performance as in the blossoming of her splendidly timbred voice.
Salzburger Chronik, August 17, 1922, p. 4

When a singer appearing in Mozart’s Marriage of Figaro became indisposed in August 1922, the Festival audience got to admire Rosette ANDAY playing the role of the male page »Cherubino« for the first time. In the summers of 1925 and 1928 she was again cast as »Cherubino« and »Dorabella« in the two Mozart operas – which had been part of the repertoire of the Vienna State Opera since the time when Gustav Mahler had been its director.

It is clear that the Vienna State Opera made its Mozart – presented as a composer and Freemason who crossed borders to be universal and cosmopolitan – the musical star of the Salzburg Festival.

In 1926 a Viennese Operetta appeared on the program for the first time under the musical direction of Bruno WALTER: Johann Strauss’ Die Fledermaus. Rosette ANDAY played the role of »Prince Orlofsky«, but she was way overshadowed by the glamorous star singer Fritzi Massary who appeared as »Adele«.

It was reported that the Salzburg Fledermaus filled the house and brought in a lot of money but could not attract an international audience, only Austrians – »Salzkammergut-Habitués« in particular, which presumably means Viennese who enjoyed spending their summer vacationers in the nearby Salzkammergut lake district.

It should also be noted that Bruno WALTER was the only conductor in the festival summers who gave orchestral concerts with works by Gustav Mahler: including his Lied von der Erde that opened on August 19, 1928 with Rosette ANDAY singing the alto solo role, then in August 23, 1931 with Sigrid Onégin singing that role, and on August 15, 1934 with Rosette ANDAY singing it once again:

With the magnificent Mrs. Anday in the alto part. This woman feels with her, deep sadness fills her soul. Gustav Mahler himself seems to be saying goodbye to life in her. […]. Otto Kunz
Salzburger Volksblatt, August 16, 1934, p. 7

In the summer of 1933, Rosette ANDAY, dubbed »Frau Kammersängerin«, received a letter of thanks from the Salzburg Governor, Dr. Franz REHRL, a letter that made no reference to the political context in which he wrote his words of thanks:

1933 was a politically turbulent year. The festival city of Salzburg was on the border of Nazi Germany, which had imposed a »thousand-mark ban« on Austria in order to ruin the Salzburg Festival – around 50 percent of the audiences in previous years had consisted of German guests and if Germans were only allowed to spend 1,000 marks in Austria they couldn’t possibly cover the costs of attending the Salzburg Festival. The same goal was intended by forcing cancellations by artists, including Sigrid Onégin, shortly before the opening of the Salzburg Festival in 1933.

The prominent singer Sigrid Onégin was one of the most sought-after alto singers in Europe but in 1933 she cancelled her plans to sing at the Salzburg Festival and gave preference to the Bayreuth Festival – »Hitler’s Court Theater« (according to Thomas Mann). So Rosette ANDAY took her place and sang the role of »Orpheus« (a man) in Gluck’s opera Orpheus and Eurydice conducted by Bruno WALTER and directed by Margarete WALLMANN – both of whom had been driven from Germany on »racial« grounds.

But the Jewish origins of the artists who gave the festival city its international radiance was kept from the public. Otherwise it would have been appropriate to thank the singer Rosette ANDAY as a Jew for rescuing the Festival.

Instead of Ms. Onegin, who had canceled shortly before the performance, Ms. Anday – one may use the word heroic here – jumped in. The artist came straight from a sanatorium, where she had undergone an appendectomy operation 21 days ago, which resulted in pleurisy. So she took to the stage against medical advice and actually had to be strengthened by means of an injection between acts.
In fact, Ms. Anday is livelier than her predecessor. Her voice is softer & cozier, and her lamentations and cheering really come from the heart. And she put all her energy into her vocal technique. With her beautiful diction she managed to bring out the full darkness of the material even in the difficult parts. When, at the end of the performance, Bruno Walter let the artist step in front of the curtain alone, she was cheered by the audience. […] Otto Kunz.
Salzburger Volksblatt, August 1, 1933, p. 6

Politically motivated cancellations, reshuffles and program changes also occurred in the following festival summers, especially when Clemens Krauss, director of the Vienna State Opera, and some of his ensemble members emigrated to the capital of the German Reich towards the end of 1934 and in the course of 1935.

The Richard Strauss opera Elektra, directed by Clemens Krauss for the first time in the Summer Festival of 1934, would have had to be partly re-cast when it was supposed to resume in 1935.

In February 1935 it was still said that Erich KLEIBER, who had courageously resigned as a general music director in Berlin, was to be the conductor of the Elektra in Salzburg. In May 1935, however, the decision was made to cancel Elektra »by order of the Chancellor« (Kurt Schuschnigg) – it had become a political issue.

Elektra by Richard Strauss and Hugo von Hofmannsthal was not back on the Salzburg repertoire until 1937 in Lothar WALLERSTEIN’s Viennese production: with Rose PAULY as »Elektra« and Rosette ANDAY as »Clytemnestra« under the conductor Hans Knappertsbusch, who had fallen out of favor in Nazi Germany.

On the premier day, August 8, 1937, Ms. ANDAY was unfortunately indisposed. Nevertheless, she played queen »Clytemnestra« and even received good reviews:

No less interesting and valuable was Mrs. Anday in the most difficult acting role in this tragedy as Clytemnestra; a physical indisposition (was it a severe earache?) unfortunately prevented the artist…yesterday from exercising fully her strong vocal medium, which was generally noted with dismay, but the mime and gesture acting in her portrayal of the deadly ill queen made it all the more impressive. […]
Salzburger Volksblatt, August 9, 1937, p. 4f.

It was her seventh summer festival, but not her last, as we can see in retrospect.

As a Jew who had converted to the Christian faith1 Rosette ANDAY was banned from performing at the Vienna State Opera in March 1938. But with the help of her husband Dr. Karl Bündsdorf, a Viennese »Aryan« lawyer, she was able to survive the seven years of terror – in Nazi ruled Vienna and in an another unknown location.

The memoirs say nothing about this. In any case, from 1937 to 1947 the couple was officially registered in Vienna: at Brahmsplatz 3/5 in the 4th district.

Rosette ANDAY had not been forgotten in Vienna, which was liberated by the Red Army in April 1945. According to a report in the newspaper Neues Österreich on May 18, 1945 her last appearance at the Vienna State Opera on March 13, 1938 was still remembered. But the anti-fascist newspaper didn’t say a word about why she had been expelled from the State Opera: racial Antisemitism.

Rosette ANDAY was able to perform in some minor roles at the Salzburg Festivals in 1946 and 1947: as »Annina« in the Rosenkavalier and as »Adelaide« in Richard Strauss’ Arabella, as »Simon’s wife« in Gottfried von Einems Opera Dantons Tod, which had its world premiere in the Salzburg Festival House on August 6, 1947.

The fact that a master performer like Rosette Anday was used for the small role of his wife [that is Simon’s wife in Dantons Tod] showed the high standard of the ensemble.
Salzburger Volkszeitung, 8. 8. 1947, p. 2

Rosette ANDAY’s last Salzburg performance was on August 24, 1947 as an alto Soloist in a concert in the Cathedral: Mozart’s Requiem, his last and unfinished composition before his death. In 1961, she took her leave from the Vienna State Opera, where she was an honorary member. She appeared for a last time as »Clytemnestra« in Elektra.

She died in Vienna at the age of 77 on September 18, 1977 and was given an honorary grave in Vienna’s central cemetery.

But her name doesn’t appear anywhere in the public spaces of the Salzburg Festival city.

1 Rosette ANDAY’s first marriage was to Baron Egon Ernst von Ketschendorf, on February 16, 1932 in New York’s Saint Thomas Church, and they were divorced in May 1933; her second marriage was to Dr. Karl Bündsdorf. on June 10, 1937 in Vienna’s Evangelical Reformed Church. 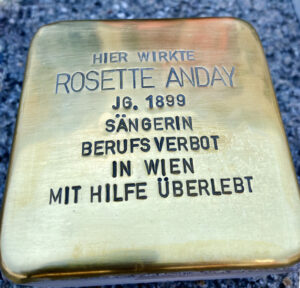 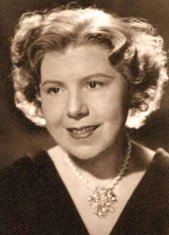 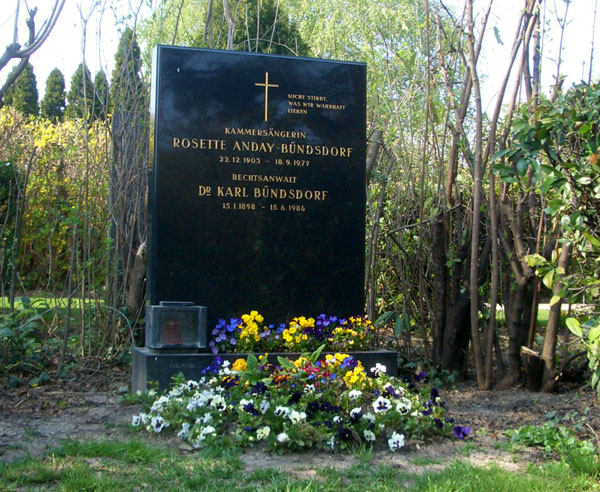