Josefa KÖCHL was born in an Alpine village 140 km south of Salzburg called Kendlbruck bei Ramingstein on March 24, 1909. She was the daughter of an unmarried servant and was baptized in the Roman Catholic parish of Ramingstein in the Tamsweg district of the Salzburg Crown Land.

The Ramingstein church birth, baptism and death records book records the death of the 35 year old Josefa KÖCHL as: »5. 5. 1944 Auschwitz«.

Josefa KÖCHL is one of the victims of the Nazi terror regime who were not included in either the 1991 book Dokumentation Widerstand und Verfolgung in Salzburg 1934-1945 [Documentation of Resistance and Persecution in Salzburg] or in the victim databank of the Documentation Archive of the Austrian Resistance (DÖW).

But research has revealed that towards the end of April 1943 Josefa KÖCHL was arrested at the orders of the Salzburg Gestapo Salzburg for »forbidden relations« with a Polish forced laborer. There is no record of any judicial procedure while she was held prisoner in the police jail on the Rudolfsplatz.

Because there is no judicial report a lot about this case remains unknown: betrayal, denunciation and more.

Who among her friends or fellow workers betrayed the farm worker Josefa KÖCHL because of a forbidden social or intimate relationship with a Polish slave laborer?

In any case, we know that the Salzburg Gestapo, bypassed the court and deported Josefa KÖCHL from the Salzburg police jail to the Ravensbrück women’s concentration camp on August 15, 1942 via Linz and Prague: on her arrival on August 21, 1942 she was registered as prisoner number 13222.

It is also documented that Josefa KÖCHL, aged 35, was transferred to the Auschwitz extermination camp on April 26, 1944 and murdered there on May 5, 1944 – the brutal end of a woman who left no written testimony of her life and suffering.

The little more that we know comes from the police records: Paul (Pawel) Fronzek, a 45-year-old Pole, was imprisoned for »forbidden contact« in the police jail on the Rudolfsplatz at the same time as Josefa KÖCHL.

On August 28, 1942, the Salzburg Gestapo had the forced laborer hanged in the presence of his Polish workmates in their place of work in Mariapfarr in Lungau.

It began with denunciation and ended with the murder of two people who remained stigmatized, dishonored, and nameless when they were not recognized as victims in liberated Austria. We have now corrected that dishonorable mistreatment. 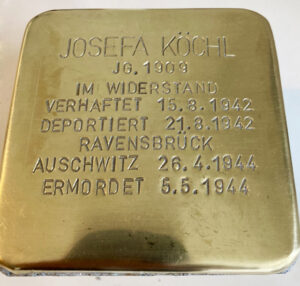