Julius FAIST was born in Vienna on August 19, 1889. He is one of those victims of the Nazi terror who was not registered by the police as a resident of the city of Salzburg although he seems to have lived here long enough to get arrested in the city.

He appears in the Salzburg State Court records of those convicted of homosexual activities. He was one of 338 people convicted of »unnatural sexual contact with a person of the same sex« in violation of § 129 I b of the Austrian criminal code – which continued in effect during the Nazi years.

Little is known about the life of Julius FAIST. Only his sentencing in Salzburg on May 19, 1943 to 18 month’s imprisonment is documented, along with the notation that after he served his sentence he was turned over to the criminal police who then sent him to the Mauthausen concentration camp. He was registered as prisoner number 106005 on September 22. 1944 and was classified as a »§ 175« prisoner (the German criminal code designation for homosexuals).

The 55 year old Julius FAIST was sent from the main camp at Mauthausen to the Gusen branch camp, where he was murdered on November 30, 1944 – the official cause of death was listed as »cardiovascular weakness, general physical decay«.

Recent research has uncovered the fact that other homosexuals who had been persecuted by the police and courts in Salzburg were murdered in the Gusen sub-camp of Mauthausen:

• Paul Schimmerl, who was born in Urfahr on June 29, 1908 [Uhrfar was the town across the Danube from Linz until it was merged with the city in 1919].

Like Julius FAIST, their names do not appear in the Salzburg police registration records and they were also not reported in the 1991 book on Widerstand und Verfolgung [Resistance and Persecution] in Salzburg 1934-1945. 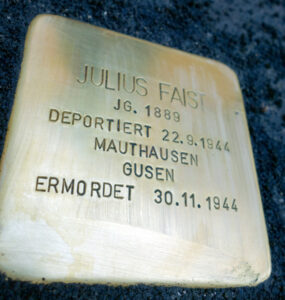