Anna MACHEK neé Schürer, was born in Bad Ischl on March 30, 1922 and was baptized Catholic. She was the only child of Anna Schürer, who started working as a servant in Salzburg in 1923. The younger Anna lived for a few years at 4 Bergstraße with her grandmother Balbine (who was a housekeeper-washerwoman in an inn). Neither her mother nor her grandmother ever married.

Anna went to a non-academic high school and then worked as a secretary in various offices in Salzburg. Starting on November 1, 1943 she was emplyed in the municipal offices of the City of Salzburg. There she met and fell in love with a somewhat older municipal employee named Anton Machek. She was already pregnant when they married in Schloss Mirabell on May 27, 1944.

In July 1944 Anna MACHEK mistakenly placed her trust in a friend and made some negative comments about the Hitler Regime. She was denounced and was dismissed by the municipality for »anti-government statements«. That brought the pregnant woman (who had neither previous convictions nor membership in any prohibited party) to the attention of the Gestapo. The notorious Gestapo Kriminaloberassistenten [superior criminal assistant] Georg König (nicknamed »Gestapo-König«)1 abused her while she was interrogated. In September 1944 the seven months pregnant Anna MACHEK was transferred from the police jail to a prison even though at no time had she been convicted of any political (or other) crime. Worse was yet to come.

During the first air raid on Salzburg in October 1944 her husband was killed in their home at 21 Gstättengasse. At that point his imprisoned wife, now a widow, was eight months pregnant. In November she was brought to the State Hospital to give birth. After giving birth to her daughter Antonia she was returned to prison. On the orders of the court doctor Antonia was placed in an institution in St. Gilgen – where she died after twelve days. Adding insult to injury, the agency registered the death of the child with the notation: »Parents Unknown«.

The 22 year old Anna MACHEK, who had lost her home, her husband and her child, suffered a nervous breakdown in prison, but she was kept in custody until the liberation of Salzburg. Later Anna MACHEK was recognized as a political victim according to the Victims Welfare Act 1947 and granted a pension. She remained alone and died in the old age home on the Schopperstraße on May 29. 1988.

1 From the Salzburger Nachrichten, June 23, 1945, page 1: »Gestapo-König arrested … König was feared above all for the rough way he treated prisoners. To extract confessions, he resorted to terrible tortures and tortures. He kicked them, broke their teeth, strapped them on a bench and beat them. Furthermore, he strangled many prisoners while holding a mirror in front of them. He performed these atrocities in a cellar so that the cries of tortured victims could not be heard. But no criminal can escape the just punishment and that includes König (…)«

Georg König was born in Wien-Alsergrund on September 19, 1913 as the son of a servant girl from Salzburg. In 1933-34 he was arrested twice in Salzburg for Nazi activities before he fled to Nazi Germany. In 1934 his Austrian citizenship was cancelled by the Salzburg authorities, but he returned to Austria as an SS-Untersturmführer (Nr. 188.288) when Austria was annexed to Germany in 1938. He served as a police officer in Lienz East Tyrol until he transferred to the Salzburg Gestapo (led by Dr. Hubert Hueber) in January 1943 where he was the Kriminaloberassistent [superior criminal assistant], responsible, among other things, for the killing of forced laborers, deserters and people who helped escapees. He was arrested near Radstadt in June 1945 and interned in the American Lager Glasenbach (Camp M. W. Orr). He was named on the »first Salzburg war criminals list« and in 1947 he was charged with war crimes by the police headquarters in Salzburg and should have been tried for his crimes. But he was able to escape from a US prison camp (presumably USDIC: US Detailed Interrogation Center in Gmunden) and went into hiding in Germany. He registered in Cologne under a false identity and was arrested there in 1947, but he was only sentenced to nine weeks in prison for escaping internment and forgery – with no further prosecution for war crimes. He was again brought to court in Cologne in 1957: this time he was sentenced to two and a half years imprisonment for extortion and other offenses, but then released because of the time he had been held in investigative custody. In Austria Georg König was never sentenced for war crimes He died in Cologne in 1988 (he is supposed to have committed suicide). 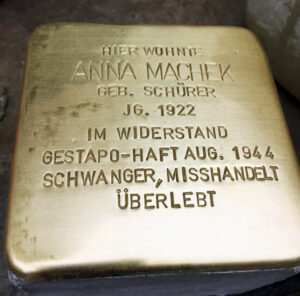 All stumbling stones at Gstättengasse 21