Bella PAALEN was born as Isabella (Izabella) Pollak in Pásztó, Komitat Nógrád, in Austro-Hungarian Hungary on December 9, 1881. She was the oldest of the three children of a Jewish couple – Laura Pollak neé Jamnitz, and Ernst Pollak. Ernst was initially a factory director, and later a representative for commercial trade agencies. The Pollaks lived in the Austro-Hungarian capital and Imperial Residence city of Vienna.

Isabella Pollak studied voice at the Conservatory of the Society of Friends of Music. Her voice teacher was a prominent interpreter of Richard Wagner’s operas: Rosa Papier. Her son Bernhard Paumgartner became head of the Mozarteum in Salzburg.

In the autumn of 1905, Isabella Pollak, whose stage name was Bella PAALEN, was employed as an alto (alto voice) in Graz. In its 1905/06 season the Graz Opera House was able to achieve brilliant successes under its artistic director Alfred Cavarn.

A sensational highlight was the Austrian premiere of the opera Salome by Richard Strauss in the presence of the director of the Vienna Court Opera Gustav Mahler. Mahler had been unable to produce it himself because of censorship by the Viennese court.

In Graz, the Vienna Court Opera singer Jenny Korb, a soprano, sang the title role of »Salome«. Bella PAALEN was heard in the small alto part of »The Page of Herodias«.

On December 3, 1906, Bella PAALEN sang the alto solo in Gustav Mahler’s 3rd Symphony for the first time in the Graz Opera House: an orchestral concert conducted by the composer himself. Gustav Mahler was so impressed by Bella PAALEN that he engaged the 25-year-old contralto at the Vienna Court Opera on September 1, 1907.

Bella PAALEN was part of the ensemble of the Vienna Court (and later Vienna State) Opera for three decades. She sang the alto parts »Fricka«, »Erda«, »Grimgerde« and »Norn« in The Ring of the Nibelung opera cycle, »Magdalena« in Die Meistersinger von Nürnberg, »Brangäne« in Tristan and Isolde and »Ortrud« in Lohengrin – all by Richard Wagner, as well as »Klytämnestra« in Elektra and »Annina« in Der Rosenkavalier by Richard Strauss along with other roles, mostly small alto parts.

Mayr’s birthplace, Salzburg, has a memorial for this. What has been forgotten, however, is that Bella PAALEN was part of the Mayr family’s circle of friends.

After the end of WWI, in 1919, Bella PAALEN made her first summer vacation in the Salzburg spa Hofgastein. She was one of the prominent spa guests who participated in charity events and gave recitals every now and then. Bernhard Paumgartner, the son of her singing teacher Rosa Papier, had been director of the Mozarteum in Salzburg since 1917 and he acted as her piano accompanist on one occasion.

In 1920 Bella PAALENS’ parents, Ernst and Laura Pollak bought house no. 34 in Hofgastein, called the »Haidenhäusl«. Her parents both died in 1935. Her father first, then soon afterwards her mother during a performance of the opera Lohengrin at the Vienna State Opera, which caused a sensation because Bella PAALEN broke off her performance as »Ortrud« when she learned about her death:

… Miss Bella Paalen’s mother, who was well into her seventies, has always been the most attentive fan of her daughter, who is not only one of the most popular members of the [opera company], but also the one who has been here for the longest, namely since 1907. The elderly Frau Paalen wasn’t only nervous, she suffered from a serious heart condition that had made her daughter very anxious when the old lady attended the opera …
Kleine Volks-Zeitung, May 19, 1935, p. 4

Bella PAALEN inherited her parents’ house in Hofgastein. Her younger brother, the artist Benedict Fred Dolbin, emigrated to the USA in October 1935. Her youngest brother Otto Friedrich Pollak had died in the First World War as a soldier in the Austro-Hungarian army.

It has been said that Bella PAALEN was honored with the title »Austrian Chamber Singer« in 1933, but that isn’t correct. In fact she only received the title in September 1937 when she was 56 years old and already »retired«.

Rosette ANDAY, who was 19 years younger than her and also sang contralto at the State Opera, had a speedier career: she made her festival debut in the summer of 1922 and was only 32 years old when she was awarded the title of »chamber singer«.

In the1937 summer festival Ms. ANDAY played the queen »Clytemnestra« in Richard Strauss’ opera Elektra – a role that Bella PAALEN had sung thirty-two times at the State Opera, but never in the Salzburg Festival.

Bella PAALEN was 52 years old when she first appeared in a small alto role at the Salzburg Festival in 1934: as »First Maid« in the opera Elektra. In the 1936 summer festival she had the small role as »Manuela« (the maid of Juan Lopez) in the Hugo Wolf opera Der Corregidor.

The festival audience was able to see and hear Bella PAALEN again in the summer of 1937, lastly on August 22nd, as »First Maid« in the opera Elektra – with only a few appearances that hardly received any attention in the reviews.

… The last two performances of the current opera year took place in front of a sold out house; this extraordinary public interest was not only aroused by the guest performances of Elisabeth Rethberg and Ezio Pinza, but also in the farewell to an artist whose whole life and all her strength were dedicated to our company for thirty years …
The drastic Marthe was Bella Paalen, to whom the audience gave a roaring farewell with frenetic applause; and when she bowed for the last time, it was certainly not only she who had tears in her eye.
Ks. Gerechtigkeit, July 15, 1937, p. 12

What went unmentioned, however, was that Bella PAALEN, who had retired, was Jewish and had not converted to Christianity to further her career. Not coincidentally the reasons why she had been honored only so late in her career remained obscure:

Bella Paalen, who retired at the end of the previous season, was awarded the title of Austrian Chamber Singer. Even if this honor came a little late, it will please everyone who is indebted to the artist for great experiences over countless years.
Ks. Gerechtigkeit, September 16, 1937, p. 7

Despite her retirement, the artist was unable to quit her thirty year career so quickly. In the annals of the Vienna State Opera it is recorded that Bella PAALEN had two more appearances: as »Palmatica, Countess Nowalska« in Millöcker’s Bettelstudent on October 11, 1937 and as »Filipjewna« in Tchaikovsky’s Eugene Onegin on March 11, 1938.

Bella PAALEN, who lived in the 1st district, probably left National Socialist Vienna only after the »Reichskristallnacht« pogroms of November 1938. At least it is on record that the 57 year old singer arrived in New York as a »Hebrew« on the transatlantic liner Hansa on January 13, 1939.

Bella PAALEN didn’t have any engagements as a singer after her arrival in New York. She was however very successful as a voice teacher. In the 1950s she sold her house in Hofgastein and lived temporarily in Vienna. Her last address was in New York City – on 85th St. in Jackson Heights Queens.

Bella PAALEN died at age 83 in the Elmhurst Hospital, Queens New York, on July 28, 1964. Her urn was placed in the Vienna Central Cemetery grave of her parents on December 3, 1964. 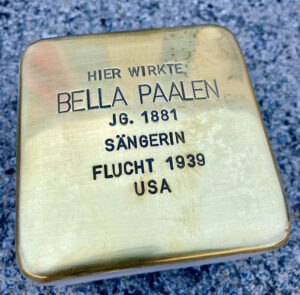 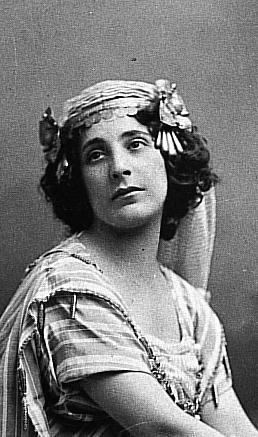