Veronika MAULTASCH, née Hofinger, was born in Altheim (Braunau district) in 1876. She had three children and had been married to a Tax Control Officer named Leopold MAULTASCH who died 1932.

The family had lived on the Schiller Street in Maxglan from 1910 to 1937, but then the widow moved in with her postal clerk son Leopold at at 9 Mönchsberg (the Huttary House: residence of Agnes Muthspiel, Herbert Breiter, Stefan Kruckenhauser and Franz Hoppichler).

Mrs. MAULTASCH had been declared legally incompetent in 1936 and she was admitted to the provincial mental hospital in Salzburg-Lehen.

On May 21, 1941 she was taken to the killing center at Hartheim Castle near Linz in Upper Austria, and murdered there. 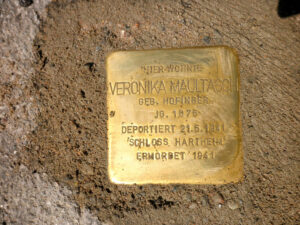 All stumbling stones at Mönchsberg 9