Johann BÖCKL was born in St. Gilgen (31 km east of Salzburg) on April 2, 1921 and was baptized in the Roman Catholic Church. He was the first of the four children of a mason named Johann Böckl and his wife Franziska. In 1930 the Böckls moved from St. Gilgen to Itzling (which was annexed to Salzburg in 1935), where they lived in a house they owned at 11 Schillerstraße 11.

In the 1930s their son Johann was briefly in nursing care in the Caritas St. Anton nursing home on the Glocknerstraße in Bruck (at the bottom of the highest mountain in the Austrian Alps). Another time he was in care in a nursing home of the Evangelical (Protestant) Diakoniewerks in the Upper Austrian town of Gallneukirchen (near Linz). His mother wanted to care for him at home rather than leave him in a nursing home, but from January 1939 on Johann was again in Gallneukirchen, but this time under Nazi domination.

On January 13, 1941 64 patients from the Gallneukirchen Diakonie, including the 21 year old Richard ASPÖCK from Hallein, the 12 year old Theresia KARAS and the 19 year old Johann BÖCKL from Salzburg were deported to the killing center in Hartheim Castle near Linz and murdered. As with all the other victims of the Nazis’ »T4«1 secret program to eliminate the handicapped their deaths were not recorded in the police registration files of their home towns.

Johann BÖCKL’s younger brother Josef was drafted into the German army in 1942 and was last reported as missing in action. Johann’s parents and his brothers Franz and Karl survived the terror years. 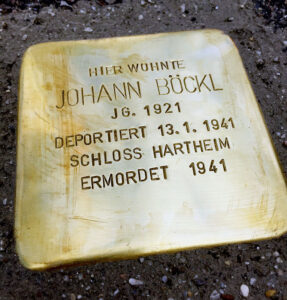 All stumbling stones at Schillerstraße 1