Bertha Schwarz Kohn was born in the Upper Austrian town of Gmunden on June 24, 1874. She was the fifth of the eight children the Jewish couple Sophie Nossal Schwarz and Gustav Schwarz. The family had lived in Salzburg since 1894, in a so-called »Faber-house« at 3 Hubert-Sattler-Gasse. Gustav (also known as Gutmann) Schwarz was a wine dealer by occupation who originally came from Tutschap (Tučapy) in southern Moravia [now the Czech Republic]. He was a religious Jew who taught religion and served as the Synagogue superintendant as well as being a board member of the Chewra Kadischa burial society and the official Jewish Community Organization of Salzburg. Both of the Schwarz parents died before the end of the Austro-Hungarian monarchy and were buried in Salzburg’s Jewish cemetery in Aigen.

Three of their four daughters married in Salzburg while their parents were still alive: Veronika and Anna married the brothers Adolf and Bernhard Mamma, and Bertha married the eight years younger Hermann Kohn in June 1911. Hermann Kohn had been the cantor of the Salzburg synagogue since 1907, the same year that Rabbi Dr. Adolf ALTMANN had come to Salzburg. The Kohns attempt to set up a kosher restaurant to serve Salzburg’s Jewish residents and visitors was opposed by the city’s Antisemitic restaurant owners’ association and at first the city authorities refused to give them a license. But when the Kohns appealed the decision to higher authorities in Vienna the Antisemites in the city of Salzburg were overruled and on January 3, 1912 Hermann Kohn was awarded a restaurant license. From then on he and his wife Bertha operated a modest restaurant on the ground floor of 10 Haydnstraße, not far from the »Faber- and Heller-houses« where there were about 24 Jewish families. The Kohns, who remained childless, lived in a »Faber-house« at first and after 1917 they lived on the first floor at 14 Wolf-Dietrich-Straße 14, near both the restaurant and the synagogue on the Lasserstraße that had been built in 1901.

The synagogue where Hermann Kohn sang as cantor for more than three decades was attacked and badly damaged by Nazi storm troopers during the night of November 9-10, 1938. The Kohns, who had been forced to close their kosher restaurant before the night of the pogrom, were expelled from Salzburg in November 1938 — according to the police registration files to Kanitz (Kanice) in Moravia [it was part of independent Czechoslovakia at that time, but in March 1939 it was taken over by Nazi Germany and became part of the so-called »Reich Protectorate of Bohemia and Moravia«]. The Shoah-databank of Yad Vashem reports that the 59 year old Hermann Kohn was deported from Trebitsch (Třebíč) in Moravia to the Theresienstadt concentration camp on May 22, 1942 — and that three days later he was sent on to the Majdanek extermination camp where he was murdered. The databank of Austrian victims at the Documentary Archive of the Austrian Resistance (DÖW) has no record of Hermann Kohn — who had been born in Aspern an der Donau in 1882 and whose wonderful singing voice was well remembered by survivors of the Shoah from Salzburg.

The fate of his wife Bertha remains unclear. A woman with that name and a supposed birth date of August 26, 1872 was in the same transport to Theresienstadt as Hermann Kohn and was sent to the Treblinka extermination camp — she may have been Hermann’s wife, but it isn’t certain. What is certain is that two of Bertha Kohn’s Gmunden born sisters, Josefine Reis and Veronika Mamma, were murdered in Treblinka along with Veronika’s husband Adolf Mamma. Rosa Hechinger, a daughter of the Mamma couple who had been born in Salzburg on December 12, 1899, had lived and gotten married in Munich before she became a patient at the Eglfing-Haar Sanatorium and she had already been murdered on November 30, 1940.

We also know that Bertha Kohn’s younger brother Bruno was able to flee to the United States. He lived in Chicago and died in August 1963. 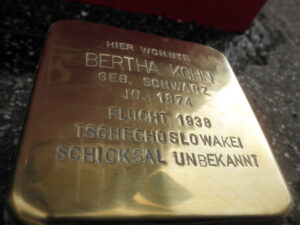 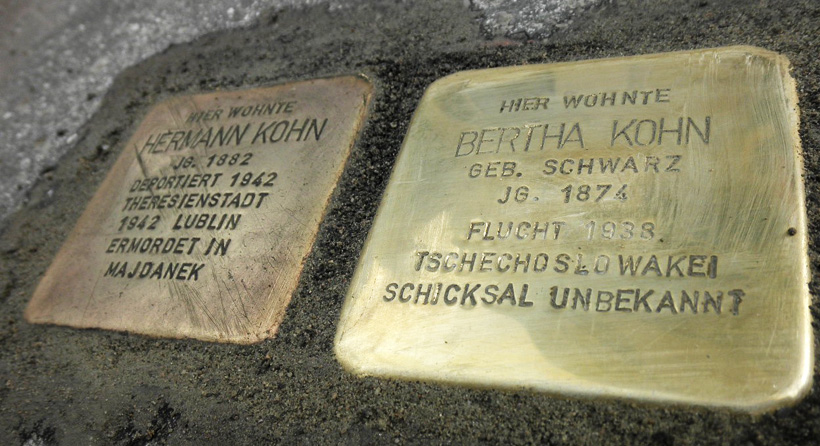 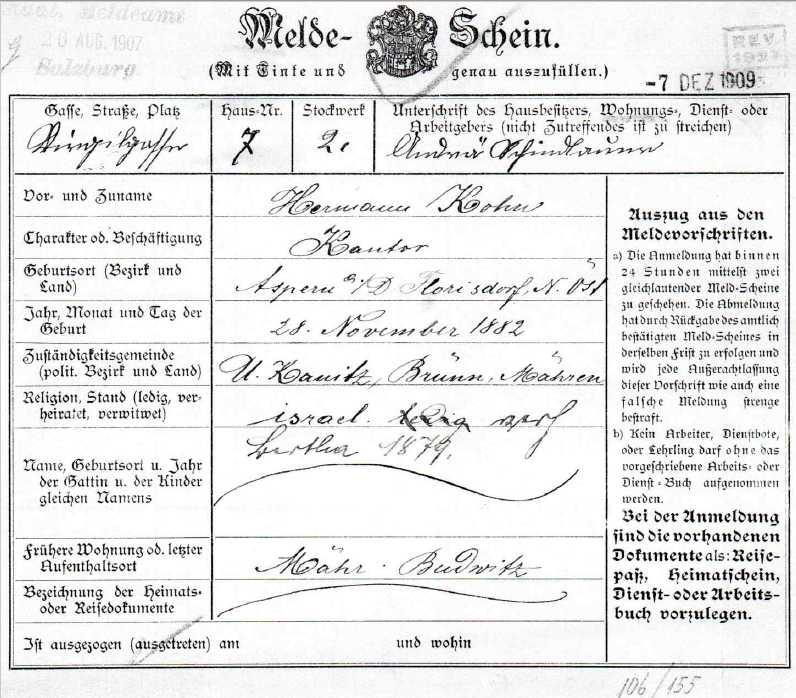 All stumbling stones at Wolf-Dietrich-Straße 14