Georg Max PRECHTL was born in Julbach Bavaria on September 2, 1893. He was a married Catholic with two sons and a daughter. He was a locksmith or machinist and became a foreman.

Starting in 1919 the family lived at 9 Schillinghofstraße in Gnigl (which was annexed to the city of Salzburg in 1935). His daughter Maximiliane died when he was ten years old in 1930.

Georg PRECHTL was admitted to the Salzburg State Asylum on June 9, 1937 and was one of the 82 patients deported from there to the Hartheim Castle killing center near Linz on April 17, 1941 – where they were all murdered.

As with all the other victims of the Nazis’ secret »T4«1 program, the death of 47 year old Georg PRECHTL was not recorded in the Salzburg police registration files.

His widow Johanna PRECHTL and their two surviving sons Wilhelm and Georg Max left Salzburg after its liberation in 1945. 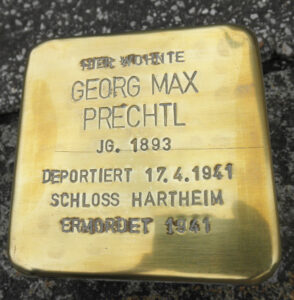 All stumbling stones at Schillinghofstraße 9