Elisabeth LEITNER was born in Salzburg in 1885. She was the Catholic daughter of a banker and entrepreneur. She was first admitted to the Salzburg Provincial Sanitarium in 1917.

On April 18, 1941 she was sent from there to the extermination center at Schloss Hartheim near Linz in Upper Austria where she was murdered. Her father, Karl LEITNER, had acquired Schloss Mönchstein in 1887 and had the villa that is named after him built (he also had the street from Mülln to the Mönchsberg paved along with constructing the electric elevator, the restaurant and the viewing tower).

Elisabeth’s mother Kreszentia LEITNER sold the property on the Mönchsberg and died in Salzburg in 1947. 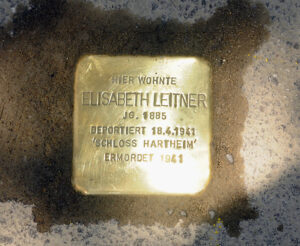 All stumbling stones at Mönchsberg 27