Roman HOFBAUER was born in Hainfeld (in the Lilienfeld district of Lower Austria) on May 17, 1894. He was the younger of the two sons of the Catholic couple Theresia and Alois HOFBAUER. The family had local citizenship rights in Salzburg and lived in the Riedenburg neighborhood. Alois was a railroader, a train driver for the Austrian National Railway (ÖBB). Roman’s older brother Leopold was a married teacher, but died when he was only 34 years old. Roman’s mother Theresia died in 1933.

Roman HOFBAUER remained unmarried and worked in an office. He had already been committed to inpatient treatment a few times in the 1920s and he became a long term patient in the Salzburg State Asylum in July 1932. He was one of 82 patients who were deported from there to the Hartheim Castle killing center near Linz on April 17, 1941 — where they were all murdered. As with all the other victims of the Nazis’ secret »T4«1 program, the death of the 46 year old Roman HOFBAUER was not recorded in the Salzburg police registration files. His widowed father, who had lost both of his sons, died in Salzburg at age 85 in 1951. 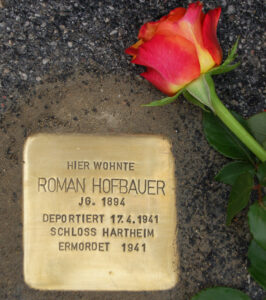 All stumbling stones at Moosstraße 14