Maria PRODINGER was born into a large Salzburg family on September 9, 1914, a few days after the start of World War I. As a young girl, she completed an apprenticeship as a dressmaker and worked briefly as a housekeeper.

At the age of 20 she was admitted to the provincial sanatorium for mental and emotional illness in Salzburg (now the Christian Doppler Clinic) with a diagnosis of schizophrenia. Her parents and siblings visited the young woman regularly during her years in the sanatorium, but when they arrived on April 16, 1941 they were denied entrance into the clinic.

That was the date of the first transport from the sanatorium of patients declared »incurable and unlikely to recover« to the extermination center at Hartheim Castle near Linz in Upper Austria.

The 26 year old Maria PRODINGER was number 50 of the 68 persons on that day’s departure list. Maria PRODINGER´s parents were told that their daughter was being transferred to a comparable institution in Bernburg/Saale in Germany »for reasons related to national defense.«

Two and a half weeks after Maria Prodinger´s removal from Salzburg and her murder at Hartheim, her relatives were informed of her death, which they were told was from »acute miliary tuberculosis.« 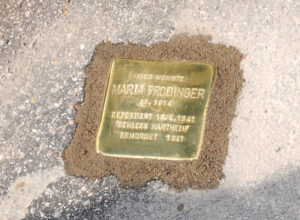 All stumbling stones at Stauffenstraße 15