Marie »Mitzi« PIRAK was born in Salzburg on August 30, 1901. She was the first of four children born to a Jewish couple, Leopold PIRAK and Gisela PIRAK née Haas, who had moved to Salzburg from Brünn (Brno) in Moravia (then part of Austria-Hungary) in 1899. The PIRAK family had local citizenship rights in Salzburg under the old Austrian local citizenship laws and lived in the corner house at Wolf-Dietrich-Straße 2 / Linzer Gasse 53. The businesswoman Gisela PIRAK had owned the house until she was forced to sell it in the economic crisis of 1920,1 but the family home and business remained there until they were forced out in 1938 – they lived on the first floor and Gisela’s clothing and fashion shop was on the ground floor.

The husband and father Leopold PIRAK was a member of the board of he Jewish Community of Salzburg. He died on March 23, 1927 at the age of 67 and was buried in the Salzburg Jewish cemetery in Aigen – »deeply mourned by his wife and children« is inscribed on his headstone.

On August 19, 1928 Rabbi Dr. Manfred Papo2, shortly before he left to take over the leadership of the Sephardic community in Vienna, presided over a marriage ceremony in the Salzburg synagogue: Marie PIRAK, who had graduated from a trade school and worked in her mother’s shop, married a traveling salesman named Oskar Szijo SCHMALZBACH. Schmalzbach had been born on December 6, 1890 in Jaroslau (in Austria-Hungary at the time, it became Polish in 1918) and lived in Vienna, but he had not been granted citizenship in the Austrian Republic after his birthplace became Polish and he was legally stateless. Their son Herbert was born on August 11, 1929 and was registered in the Vienna Jewish Community.

Oskar SCHMALZBACH was often away due to his job as a traveling salesman, so Marie and Herbert generally lived in Salzburg with Marie’s mother Gisela PIRAK and Marie’s still unmarried siblings Erna, Friedrich and Alfred. Erna had been born there on April 13, 1903 and worked as a salesclerk and dressmaker. Friedrich (born on January 14, 1905) worked as a commercial employee and was a member of the local Zionist group and served on the cultural committee of the Salzburg Jewish Community. Alfred (born on December 31, 1906) had trained as an auto mechanic and worked as a chauffeur.

The economic crisis of the 1930s hit Jewish businesses especially had because of the growth of Antisemitism. Many had already been driven to the edge of bankruptcy so they were forced to sell their businesses as quickly as possible and far below their real value when faced with the terror year of 1938. The widow Gisela PIRAK was one of these victims. Her business was coveted for its good location and was appropriated by a Salzburg clothing merchant in June, 1938. In November 1938 the PIRAK family also had to give up their apartment on the 1st floor of 53 Linzer Gasse. The beneficiary was a functionary of the Nazi Welfare Association (NSV).

The impact on the lives of victims has hardly been researched so far. Gisela PIRAK’s son Alfred was one of the 26 Jews arrested in Salzburg during the pogrom night of November 9-101938 and deported to the Dachau concentration camp. They were released only after promising to leave the »German Reich« immediately. By the end of November 1938 all the members of the family had fled to Vienna.

Over the course of 1939 the 68 year old widow Gisela PIRAK and her children Erna, Friedrich and Alfred were able to escape to exile in the free world. Friedrich was the first as he took passage to New York via Swedish Gothenburg. Alfred was the second to make it via Liverpool in England. Gisela PIRAK and her daughter Erna only made it as far as London until after the war, when they were able to emigrate to Sandusky Ohio in August 1945 and join Friedrich PIRAK who had settled there. In 1951 the widow Gisela PIRAK died at age 80 in Cleveland, Ohio. Friedrich, who had married a Jewish refugee from Linz, died in Cleveland in 1971. Daughter Erna, whose married name was Ornstein, died in Mayfield Heights Ohio in 1981, while Alfred, who had married a Jewish refugee from Mistelbach in Lower Austria, died in Hallandale Florida in 1983 – three of the four Salzburg born siblings.

Gisela PIRAK’s daughter Marie, her husband Oskar SCHMALZBACH and their son Herbert were unable to get visas for the US or Great Britain, presumably because of Oskar’s statelessness, but they were able to get to Paris in February 1939. In 1940 they fled before the German advance and took refuge in the unoccupied »Zone libre« of southern France that was under the administration of the collaborationist regime of Marshall Philippe Pétain in Vichy. They stayed in Allez-et-Cazeneuve in the department of Lot-et-Garonne while they waited for transit visas and ships passage to the free world that never arrived.

In 1942 the SCHMALZBACH family was arrested and held in the Casseneuil internment camp before being transferred to the Drancy transit camp outside Paris. The Drancy camp was where the SS organized their transports to the extermination camps at Auschwitz, Majdanek and Sobibor from 1942 to 1944: 79 convoys altogether, death trains with about 76,000 Jewish children, women and men. On September 9, 1942 the 52 year old Oskar SCHMALZBACH, his 41 year old wife Marie, and their 13 year old son Herbert were included in Transport Nr. 30 from the Drancy transit camp to Auschwitz. Only Oskar SCHMALZBACH was registered in the camp rolls at Auschwitz: death on January 27, 1943. His wife and son were presumably gassed on arrival at Auschwitz-Birkenau as those who were gassed right away weren’t registered.

All three Shoah victims are entered in the Israeli Databank at Yad Vashem. Oskar SCHMALZBACH is also in the Austrian Databank (DÖW), but the Salzburg born Marie PIRAK and her son Herbert have been missed, an additional reason why both should be retained in the memory of the city of Salzburg.

1 Since 1920 the owner of the property at 53 Linzer Gasse / 2 Wolf-Dietrich-Straße was a Swiss citizen named Eugen Weil. The property was included in a register of Jewish property by the Nazi regime but wasn’t confiscated because he was a Swiss citizen. His heirs Johanna Picard-Weil and Dr. Elly Feinberg-Weil sold the building in 1966 (Salzburg Schallmoos Property Register EZ 285).

2 Dr. Manfred Papo was born in Vienna on October 17, 1898 and was the Salzburg Rabbi from 1925 to 1928. He served in Vienna and St. Pölten from then until 1938, and after that was a Rabbi in Manchester and Salisbury. He died in Vienna on May 5, 1966 in Wien; his mother Laura Papo and sisters Rachel and Elfriede were Shoah victims. 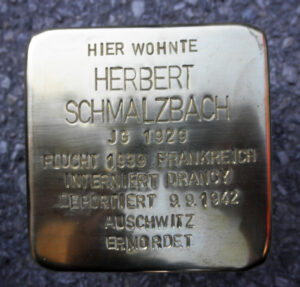 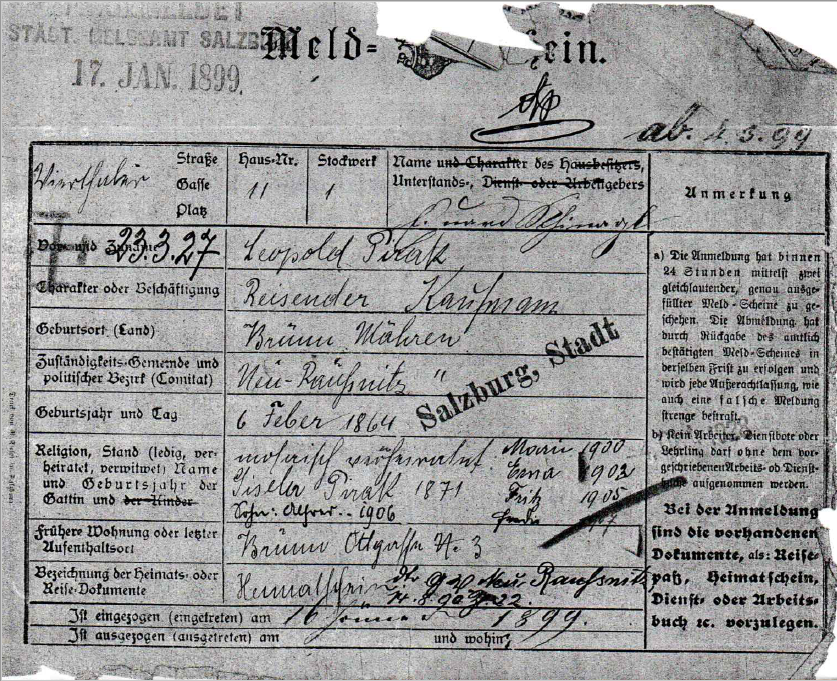 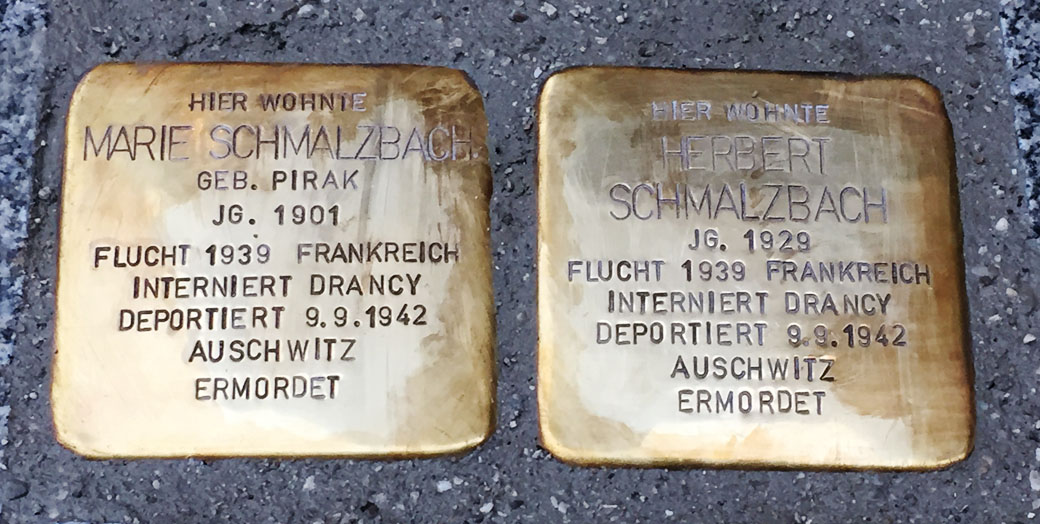 All stumbling stones at Linzer Gasse 53