Josef EGGER was born in Radstadt (about 70 kilometers south of Salzburg) on March 8, 1891. He was an unmarried Catholic businessman who was registered as living as a sub-tenant in the Schallmoos district of Salzburg. He also had a record of a criminal conviction as a homosexual under § 129 of the Austrian Criminal Code I b.

According to the records of the Salzburg State Court, at the beginning of the Second World War six men, all over 40 years of age, were arrested and prosecuted for their homosexuality.1 The penalties and prison sentences from these prosecutions are now unknown because these court records were destroyed in the 1990s as not worth archiving.

What is known is that Josef EGGER was deported to the Dachau concentration camp on October 5, 1940, where he was registered as PSV-Prisoner Nr. 20149 (PSV = »protective police custody«, prisoners whose clothing was marked with a green triangle). On April 5, 1941 Josef EGGER was murdered in Dachau at age 50. His death was noted in the City of Salzburg police records.
We also know that Otto SCHNEIDER, who was arrested with Josef EGGER, was murdered in the Buchenwald concentration camp on November 30, 1941. One of the six men prosecuted survived the Nazi regime in Salzburg, but the fate of the other three is still unknown.

1 Under the Nazi regime charges were brought in the Salzburg State Court against 338 individuals, including six women, for violating § 129 I b which criminalized »unnatural fornication with a person of the same sex« – a section of the old Austrian criminal code that remained in force under the Nazis. 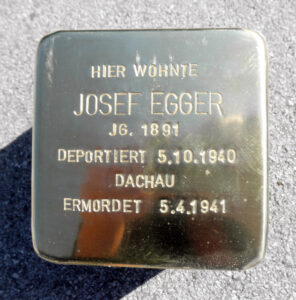 All stumbling stones at Meierhofweg 13