Elise LADINGER was born in Zell am See (about 90 Km south of Salzburg) on September 15, 1909 and was baptized in the Catholic Church. Her mother was an unmarried servant who died in 1913. After she was orphaned Elise lived with foster parents, first in Zell am See and later in Salzburg-Maxglan.

As with all the other victims of the Nazi’s secret »T4«1 program to eliminate the severely handicapped from Germany and Austria, the death of this 31 year old woman was not recorded in the Salzburg police registration files. As far as we have been able to determine she had no surviving relatives. 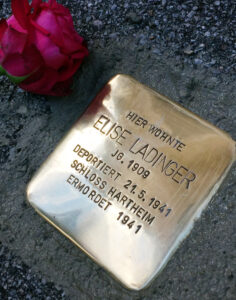 All stumbling stones at Pillweinstraße 7