Rosa LEEB was born on August 7, 1921, as the oldest of three children. She suffered from epileptic seizures from early childhood. In 1935 she was admitted to the Salzburg Provincial Sanatorium for Mental and Emotional Illnesses (now known as the Christian Doppler Clinic) with a diagnosis of »hereditary epilepsy« (a common diagnosis at the time).

After six years of treatment, the 19 year old woman was taken in the first transport from the sanatorium to the killing centre at Hartheim Castle (near Linz in Upper Austria) where she was murdered. Rosa LEEB was recorded as number 31 on the 68 person departure list.

The Nazis tried to hide their program of killing the handicapped with tactics like deliveringi Rosa Leeb´s last personal items to her parents from the sanatorium at Bernburg an der Saale in Germany with a note claiming that she had died there. 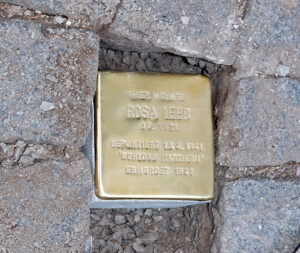 All stumbling stones at Herrengasse 12