Rudolf BEER was born in Itzling (now part of the city of Salzburg, but then an independent town) on Oktober 2, 1901. An unmarried shoemaker he lived with his railroader family at 61 Erzherzog Eugenstraße (now 17 Salzburger Schützenstraße) in Itzling.

So far nothing has been discovered about any political activities by Rudolf BEER, we only know that he was arrested with Karl Haider on August 31, 1938 and sent to the Dachau concentration camp where he was registered as »protective custody prisoner Nr. 18516« (a designation used by the Nazis for political prisoners).

His death in the concentration camp is recorded in the Salzburg City records, but his name does not appear in the documentation of resistance and persecution in Salzburg as neither a judicial record nor a victim’s assistance record is to be found.

The same goes for about 50 victims of the Nazi terror in Salzburg: ordinary people who were disappeared without a sound. 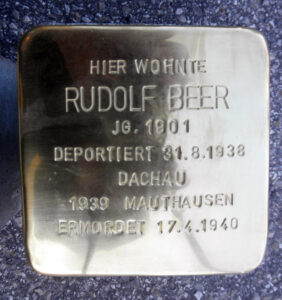 All stumbling stones at Salzburger Schützenstraße 17