Konrad HERTZKA was born in Bad Gastein, 100 Km/60 miles south of the city of Salzburg on October 8, 1911. He was the second of the three children of Marie and Dr. Josef HERTZKA. Konrad’s father had converted from Judaism to Lutheranism before his marriage in 1906. Dr. Josef HERTZKA was a general practitioner in Bad Gastein before he moved to Salzburg and set up a practice at 18 Wolf-Dietrich-Straße in 1917. The family lived in the house where he had his practice and it belonged to his wife Marie. She was a Roman Catholic and had her children Christine, Konrad and Gottfried all baptized as Catholics.

Christine attended a Catholic teacher training institute and was an elementary school teacher in rural districts while her brothers Konrad and Gottfried graduated from the Humanistic Gymnasium [academic high school] in Salzburg and then went to Vienna for further studies. Konrad studied engineering physics at the Technical High School [now Technical University] and he passed his final state examination with a grade of very good on May 7, 1936 and was awarded the title of »Engineer« (its holders are now called »Diploma Engineers«). Gottfried received his Doctor of Medicine degree on July 15, 1938, that is under the recently installed Nazi regime. For the Nazis Christine, Konrad and Gottfried counted as »first degree Jewish half breeds«. Their father, who had died at age 61 in August 1936, would have been counted as a »full Jew« by the Nazis if he had still been alive and would have been prohibited from working as a doctor.

The ordeal of his son Konrad began in 1938. The 27 year old suffered from severe depression and was admitted to the Salzburg State Asylum on October 28, 1938 [it is now called the Christian Doppler Clinic]. On November 10, 1938, right after the so-called »night of broken glass« pogrom, a psychiatrist issued a severe diagnosis for HERTZKA that led to his being kept confined there while a Salzburg court declared him »legally incompetent«.

His mother and legal guardian Marie HERTZKA objected in vain to this decision, saying her sick son Konrad could work in agriculture under medical supervision and that that would heal him more quickly. Official records report that the patient Engineer Konrad HERTZKA escaped from the Salzburg State Asylum in September 1940, and we can assume that his mother was able to get him out of the mental hospital and found him a refuge far from Salzburg. The police tracked him down at the Erzberger estate in Szillen, East Prussia – the easternmost province of Germany at the time – so his freedom didn’t last long.

In November 1940 Salzburg’s police register located the patient Konrad HERTZKA in the Tapiau Asylum in East Prussia. He stayed there about 15 months and on February 5, 1942 he was one of the 349 who were transferred to the Uchtspringe State Asylum in Sachsen-Anhalt and who died there in 1942 [it is now called the SALUS GmbH Fachklinikum Uchtspringe Tageskliniken für Psychiatrie und Psychotherapie]. Salzburg’s police registration recorded the death date of the 30 year old Konrad HERTZKA as March 7, 1942 and gave the location as Station 23 of the Uchtspringe State Asylum – a place with a significant number of deaths under the Nazi regime.1

We know too that Konrads sister Christine HERTZKA was fired from her teaching job in 1939 because she was a »Jewish half breed«. She survived the terror years in Bavaria and emigrated to the US, where she married. Their younger brother Gottfried also had to leave Salzburg. He worked as an auxiliary doctor in Bavaria and came into conflict with the Nazis when he opposed its »Euthanasia« campaign [the mass killing of physically and mentally handicapped patients deemed unworthy of life]. He was imprisoned and was liberated when the allies reached Landsberg on the Lech. Dr. Gottfried HERTZKA later lived and practiced medicine in Constance and in 1970 he founded the »Hildegard-Medicine« alternative medical treatment system based on medieval texts attributed to St. Hildegard von Bingen. Their mother Marie HERTZKA spent her old age in her younger son’s institution, and that’s where she died. 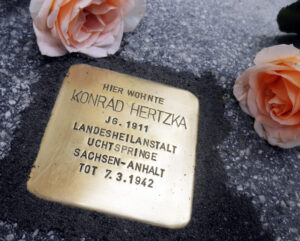 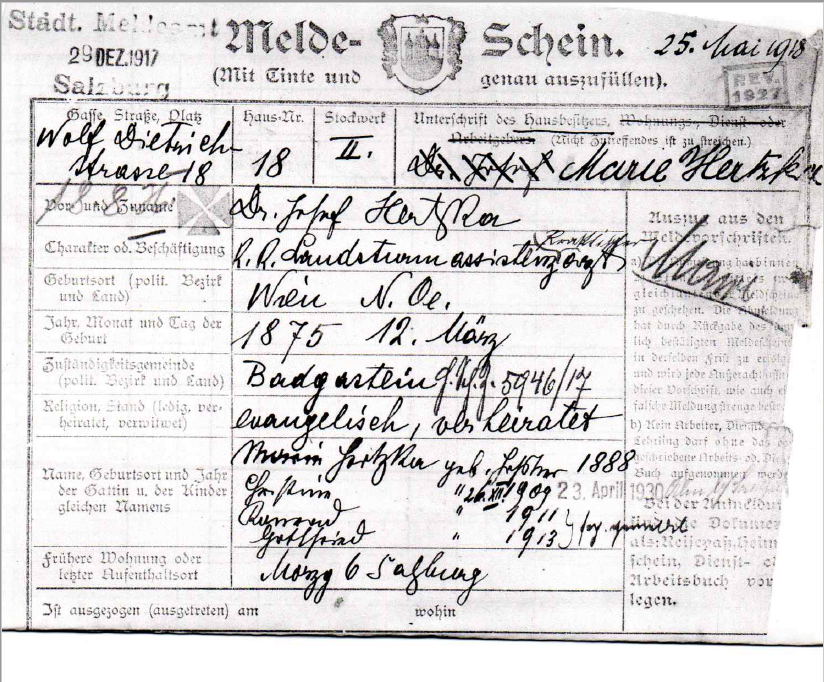 Registration form of the Hertzka family

All stumbling stones at Wolf-Dietrich-Straße 18