Blasius SKERL was born in Pöllau am Greim (in the Murau district of Austrian Styria) on February 3, 1905.

He was a Catholic unmarried unskilled worker when he moved to Salzburg in April 1942 and nothing further is known about his earlier life. And given the paucity of police and judicial files there isn’t much that can be said about his later life either. The police registration files of the city of Salzburg indicate that he lived at 6 Franz-Schubert-Straße in the Itzling district of the city.

The house belonged to Georg STRASSER, a former activist in the Austrian dictatorship’s »Fatherland Front« who was persecuted by the Nazis and who died on October 27, 1942 at age 55 from injuries related to his previous mistreatment in the Dachau concentration camp – STRASSER was just one of the many victims of Nazi local group leader Johann Hofer.

Blasius SKERL worked as a stoker (in an unidentified business) when he was arrested by the Gestapo on September 15, 1944. On September 27, 1944 he was deported from the Salzburg police jail to the Dachau concentration camp, where he was registered as »protective custody prisoner« Nr. 111809 and identified as a political prisoner who had to wear a red triangle patch on his clothes.

On October 22, 1944 he was transferred to the Neuengamme concentration camp and registered there as »protective custody prisoner« Nr. 62909 and again marked with the red triangle patch according to his prisoner files.

Documents indicate that Blasius SKERL was in the Bremen-Schützenhof external camp starting in December 1944 — where he was a slave laborer working for the Krupp affiliated Deschimag (Deutsche Schiffsmaschinenbau AG). He died there at age 40 on April 2, 1945.

According to the Neuengamme Concentration Camp Memorial Center Blasius SKERL left behind a pocket watch and that they have been unable to locate any survivors to send it to. His death seems to have remained unnoticed.

The Salzburg police registration file just says: »moved to an unknown address«. It is notable too that his name doesn’t appear in the databank of the Austrian Resistance Archive. 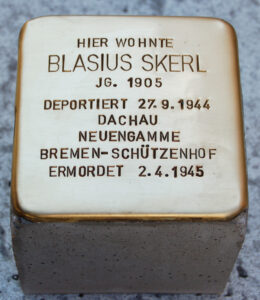 All stumbling stones at Franz-Schubert-Straße 6