Franz SILBERBAUER was born in Steinerkirchen an der Traun (Upper Austria) on February 20, 1880. He was a married Catholic who worked in the post office at the Salzburg main railway station. He was a member of the Social Democratic Labor Party and its associated Free Trade Union. Franz and his wife Elisabeth SILBERBAUER had local citizenship rights in Salzburg and lived in public housing in the Elisabethvorstadt neighborhood.

Franz SILBERBAUER didn’t belong to any resistance group but he was an opponent of the Nazi regime and someone must have denounced him for that. On June 3, 1944 the Gestapo arrested him in his apartment for having listened to forbidden »enemy« radio broadcasts. He wasn’t charged with the crime because a police doctor, who presumably wanted to help him, declared him incompetent and had him sent to the state psychiatric hospital instead. But the Gestapo wouldn’t let go of him, they took him out of the hospital and deported him to the Mauthausen concentration camp where he was registered as a »W.A.DR« [member of the German Army] prisoner on August 12, 1944. The 65 year old prisoner number 82837 was sent to Block 3, which was supposed to be an »infirmary« but was in reality a death camp. Franz SILBERBAUER’s death wasn’t recorded in the camp records, but he disappeared from all records. In 1953 he was officially declared dead as of April 1, 1945 by the Salzburg State Court.

His wife Elisabeth, who was away visiting relatives in the countryside of Lungau south of Salzburg when her husband was arrested, never saw her husband again. On June 10, 1944, a week after Franz’ arrest, Elisabeth was arrested by the Gestapo for the same »crime«. She was charged with violating the radio laws and a »special court« in Salzburg convicted her and sentenced her to 18 months imprisonment on September 29, 1944. The 67 year old woman survived her imprisonment in the Waldheim bei Chemnitz women’s prison and returned to liberated Salzburg in May 1945 – where she found her home had been destroyed in a bombing raid. She had lost her husband and everything that had belonged to her. She was left alone to try to discover what had happened to her husband. She learned about his violent death from another prisoner who had survived Mauthausen. Elisabeth Silberbauer was granted victims’ compensation in liberated Austria and died 1965 in the Hellbrunn home for the aged at 87. 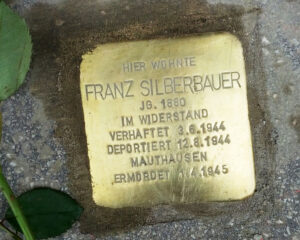 All stumbling stones at Plainstraße 11