Karl LACKENBAUER was born in Hallwang (about 6km north of Salzburg) on October 31, 1881. He was a Catholic railroader who got married in 1920 and had four children — one of whom, his son Josef, died at age 4.

The family lived in Itzling and had local citizenship rights in the Gnigl district, which included Itzling until they were both annexed to Salzburg in 1935.

Karl LACKENBAUER had been a patient in the Salzburg State Asylum since August 1, 1935 when he became one of 85 patients deported from the asylum on May 21, 1941 to the Hartheim Castle killing center near Linz — where they were all murdered.

As with all the other victims of the Nazis secret »T4«1 program, the death of the 59 year old Karl LACKENBAUER was not recorded in the Salzburg police registration files. His widow and three children survived the terror years and moved to a rural district. 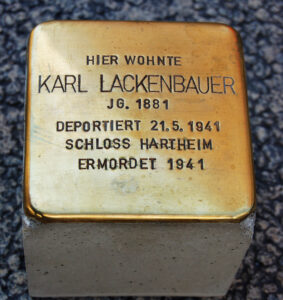 All stumbling stones at Erzherzog-Eugen-Straße 24