Beatrix SCHMIDT, née Urbanek, was born in Brod Bohemia (now Český Brod in the Czech Republic) on January 20, 1866. She was a Protestant widow who had a son who lived in Vienna.

Her husband had been a colonel in the Austro-Hungarian army and his brother was a Salzburg attorney named Ferdinand SCHMIDT. Ferdinand owned the house at 33 Schwarzstraße where Beatrix SCHMIDT lived before she became a patient at the Salzburg State Asylum. She was committed to the asylum several times after 1920.

Beatrix SCHMIDT was one of the 29 patients deported from there to the Hartheim Castle killing center near Linz on April 18, 1941 – where they were all murdered.

As with all the other victims of the Nazis’ secret »T4«1 program, the death of 75 year old Beatrix Schmidt was not recorded in the Salzburg police registration files. 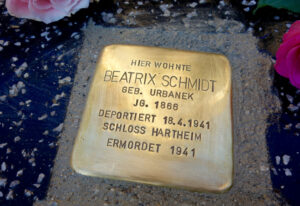 All stumbling stones at Schwarzstraße 33