Franz TANNERT was born in Salzburg on August 23, 1885 and was a son of the Catholic couple Therese and Josef TANNERT. His father was a brew master in Salzburg’s Sternbrau brewery. The family had local citizenship rights in Salzburg and their last residence was at 37 Griesgasse (known as the Brunnhaus) not far from the brewery where Josef worked.

Franz was a married pastry chef, but seems to have had psychological problems and was placed under guardianship by the Salzburg district court in 1927. Shortly after that his marriage was dissolved.

Franz TANNERT was admitted to the Salzburg State Asylum in November 1934 and was one of 82 patients deported from there to the Hartheim Castle killing center near Linz on April 17, 1941 – where they were all murdered.

As was the case with all the victims of the Nazis’ secret »T4«1 program, the death of this 55 year old man was never recorded in the Salzburg police registration files.

There is also no record of his survivors, if any. 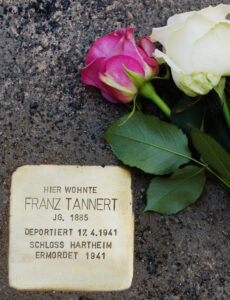 All stumbling stones at Griesgasse 37