Franz SCHINNERL was born in Salzburg on September 14, 1910. He was a single Catholic hotel clerk who lived and worked in the Nelböck Park Hotel at number 2 Weiserstraße (now the Julius Raab-Platz).1

He was arrested on October 15, 1941 (probably because of a denunciation) and according to the records of the Salzburg Provincial Court he was sentenced to a year’s imprisonment for homosexuality on January 16, 1942.2

The entire camp area was kept under quarantine for weeks because of rampant typhus and typhoid epidemics.

One to three hundred of the newly freed prisoners continued to die daily, including the 34 year old Franz SCHINNERL from Salzburg who died on May 9, 1945.

1 In 1973 2 Weiserstraße was renamed 2 Julius Raab-Platz. The site of the demolished Park hotel is now occupied by the Salzburg Chamber of Commerce’s Economic Development Institute (WIFI).

2 Under the Nazi regime the Salzburg Provincial Court saw proceedings against 338 people, including six women, under § 129 I b of the still valid Austrian Criminal Code – »fornication against nature with persons of the same sex.« The relevant court records have since been destroyed. 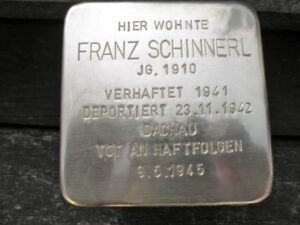 All stumbling stones at Julius-Raab-Platz 2