Johann RUSSEGGER was born in Abtenau (about 55 Km southwest of the city of Salzburg) on October 31, 1880 and was baptized in the Catholic Church. His parents were Christina and Albert Rußegger. Johann’s father was a teacher in Abtenau, but that is all we know about this family so far.

Johann RUSSEGGER lived in what was then the independent community of Maxglan (which is now part of the city of Salzburg) since 1907 and worked in an office. He became ill in his 37th year and in February 1918 he was admitted as a psychiatric patient.

He was one of the 82 patients from there who were deported to the Hartheim killing center near Linz on April 17, 1941 where they were all murdered.

As with all of the victims of the Nazis’ secret »T4«1 murder program the death of this 60 year old man was not entered in the Salzburg police registration files. 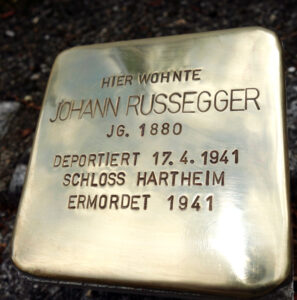 All stumbling stones at Mühlbachgasse 3