Franziska »Fanny« MATTSEEROIDER was born in Gnigl [now part of the city of Salzburg] on December 28, 1892.

She was the Catholic daughter of a railroader family that had city citizenship rights in Salzburg under the old Austrian Heimatrecht laws and lived in the Elisabeth-Vorstadt neighborhood. Fanny’s twin sister Maria died in Salzburg in 1934.

Fanny remained single and worked as a waitress and housemaid. On May 18, 1937 she was admitted to the State Asylum and she was transferred to the Merciful Sisters’ asylum at Schloss Schernberg on March 17, 1938, less than a week after the Nazi take over of Austria.

On April 21, 1941 she was shipped off to the Hartheim Castle killing center near Linz where she was murdered. 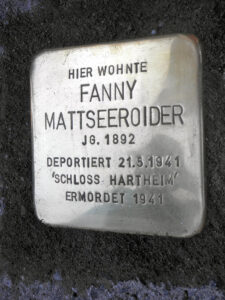 All stumbling stones at Elisabethstraße 53