Auguste VOLKMANN, née Tengler, was born in Salzburg on March 9, 1899. She was the Catholic wife of a teacher in a secondary school with a non-academic curriculum that did not prepare students to go on to university [a Realschule] and the mother of two sons. The family had local citizenship rights in Salzburg and their last joint residence was at 2 Müllner Hauptstraße.

In 1936 Mrs. VOLKMANN became a psychiatric in-patient and was declared legally incompetent. In 1940 her husband divorced her and re-married. The 42-jährige Auguste VOLKMANN was one of the 85 patients who were deported from there to the Hartheim Castle killing center near Linz on May 21, 1941 — where they were all murdered.

As with all the other victims of the Nazis’ secret »T4«1 program, the death of 42 year old Auguste VOLKMANN was not recorded in the Salzburg police registration files. 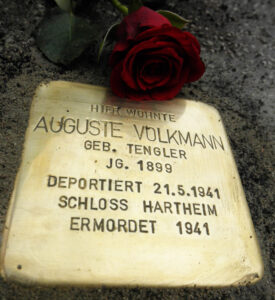 All stumbling stones at Müllner Hauptstraße 2