Hermann HAGER was born in Salzburg on March 31, 1910. He was Catholic, single, and worked as a waiter. His father had been a master tailor, but went missing in the First World War.

Hermann lived with his widowed mother Klara Hager in Maxglan, which became part of the city of Salzburg in 1935.

In November 1933 Hermann HAGER was admitted as a patient in the Salzburg State Asylum, where he stayed for the rest of his short life. He was one of the 82 patients who were deported from there on April 17, 1941 to be murdered at the Hartheim killing center near Linz.

As with all the other victims of the Nazi’s secret »T4« 1 extermination program, the death of 31 year old Hermann HAGER was not recorded in the Salzburg police registration records. His mother died in Salzburg at age 90 in 1979.

1 It was called »T4« because the Nazi’s »euthanasia« program for exterminating the severely handicapped had its headquarters at Tiergartenstraße 4 in Berlin. 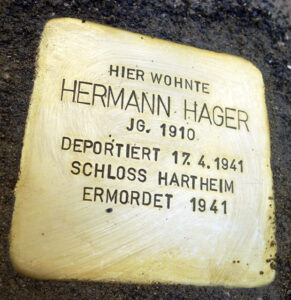 All stumbling stones at Gärtnerstraße 12