Elsbeth BULLA, née KRAEMER, was born in Berlin on November 20, 1877. She was the daughter of the Jewish couple Franziska (Fanny) Krämer, née Mendel, and Gustav Gabriel Krämer, a shopkeeper in Berlin-Wilmersdorf.

In 1911 Elsbeth converted to Protestantism and married Maximilian Bula, who was a Captain in the Austro-Hungarian when he was killed in the First World War.1

Her son Maximilian was born in Salzburg on April 7, 1915, and studied music at the Gymnasium. In April 1939 he was able to flee to Switzerland and then he traveled via Le Havre to the USA (arriving in New York on May 24, 1939). Elsbeth BULLA had lived in Salzburg for 28 years when she was forced to move to Vienna in February 1940 because of her Jewish origins. On August 20, 1942 she was deported to the Theresienstadt concentration camp where she was murdered on November 5, 1944.

It is likely that Elsbeth BULLA met her brother, Dr. Georg Krämer, when she was in the Theresienstadt concentration camp. He had been the chief prosecutor in Koblenz before he was forced from office by the Nazis, and he was a prisoner in Theresienstadt for some time before he was murdered there on November 1, 1942.

Georg’s son Fritz Krämer, Elsbeth’s nephew, had escaped to the US like his cousin Maximilian. Fritz served in the US army during World War Two and recruited the young Henry Kissinger into his division. After the war he made a career in the US Defense Department, serving as a Senior Civilian Advisor to the US Army Chief of Staff from the early 1950s until he retired in 1978. Fritz G.A. Krämer died in Washington D.C. on September 8, 2003.

After Frau BULLA was forced out of her Salzburg home it was taken over by the head of the Salzburg Gestapo Dr. Kurt Christmann (who was originally from Munich and had been a member of the Nazi party and a storm trooper since 1920). From August 1942 to July 1943 Christmann was the SS-Obersturmbannführer (Lieutenant Colonel) in charge of Einsatzkommando 10a in Krasnodar Russia (Einsatzkommando 10a was part of Einsatzgruppe D, which is estimated to have murdered more than 91,000 people).

He used a mobile gas chamber to murder captured partisans, their supporters and their family members – including children. Like a number of other Nazi mass murderers after the defeat of Nazi Germany, including Adolf Eichmann, Dr. Christmann was able to escape via Rome to Argentina. But he returned to Germany and in 1980 he was arrested and sentenced in Munich to ten years imprisonment for war crimes in Krasnodar. He died in 1987.

1 Maximilian Bulla was born in Pilsen [now in the Czech Republic] on February 24, 1879. He was a captain in the 75th Austro-Hungarian Infantry Regiment which was based in Salzburg. He was presumably also a Jewish convert as their son Maximilian (who had been baptized Protestant) was counted as a full Jew under the Nuremberg Racial Laws. 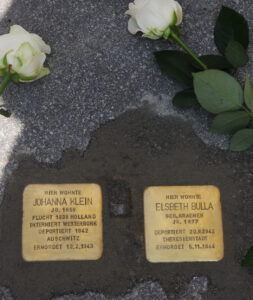 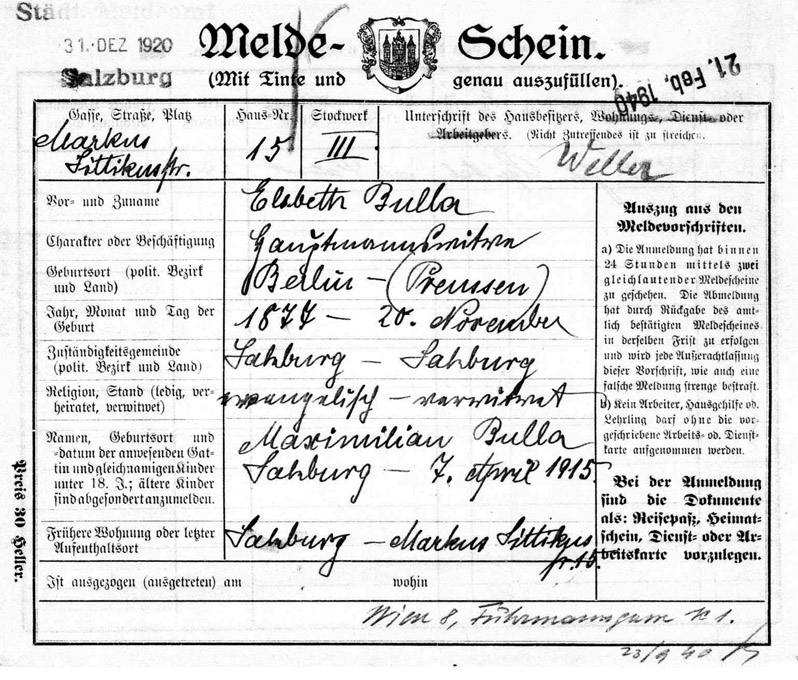 All stumbling stones at Markus-Sittikus-Straße 15