Theresia TRENKE, née Forstner, was born in Schörfling (near Vöcklabruck in Upper Austria) on September 22, 1876 and was baptized Catholic.

She was the wife of a railroader and the mother of two sons. The family lived at 6 Schillinghofstraße in Gnigl (which was annexed to the city of Salzburg in 1935) and had local citizenship rights there.

Theresia TRENKE was first admitted to psychiatric care in 1937 and became a patient in the Salzburg State Asylum in April 1940. She was one of the 85 patients deported from there to the Hartheim Castle killing center near Linz on May 21, 1941 – where they were all murdered.

As with all the other victims of the Nazis’ secret »T4«1 program, the 64 year old Theresia TRENKE’s death was not recorded in the Salzburg police registration files. So it is striking that the Nazi’s Salzburger Landeszeitung published a death notice from her survivors in the Gnigl parish on June 27, 1941:

the burial of the urn of Frau Theresia TRENKE / Assistant’s wife / will take place in the Gnigl municipal cemetery at 9.30 am on Saturday, the 28th of this month. Afterwards there will be a memorial mass in the Gnigl parish church.

The presiding pastor Franz Dürnberger wasn’t named, but he had already held a mass in Gnigl for Marie WURM, another patient who had been murdered in Hartheim. But it is shows that people were aware of the secret program to murder handicapped patients.

Pastor Dürnberger, who also held a memorial mass at the request of the Catholic mother of the Communist resistance fighter Anton SCHUBERT (who had been sentenced to death and executed), was deported to the Dachau concentration camp for his »anti-State and anti-German people [Volk] behavior«.

Pastor Dürnberger survived the terror years and was able to take up his position again after the defeat of Nazi Germany, but he has still not been recognized for his acts of resistance. 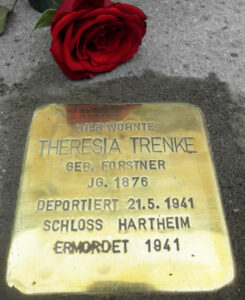 All stumbling stones at Schillinghofstraße 6