Lotte SCHÖNE was born in Vienna as Charlotte Bodenstein on December 15, 1891. She was the younger of the two children of the Jewish couple Josefine Bodenstein neé Hilfreich and Otto Bodenstein, a shopkeeper in the Leopoldstadt district of Vienna.

It was said that Charlotte Bodenstein derived her stage name Lotte SCHÖNE from her married name Charlotte Schönwälder. Her first husband was Paul Schönwälder and their son Kurt Schönwälder’s birth in Vienna on July 4, 1913 was registered with the official Jewish community organization, the Israelitische Kultusgemeinde.

Lotte SCHÖNE began her career by performing in charity concerts at the beginning of 1914, shortly before the outbreak of the First World War:

The young concert singer Lotte Schöne, who sang with great success at the Academy of the Vienna Holiday Colonies and who stood out for her voice as well as for her brilliant training, is a student of the well-known singing teacher Frau Professor R. Weisz.
Regine Weiß, Neues Wiener Tagblatt, March 27, 1914, p. 16

The other Vienna singing schools that Lotte SCHÖNE attended were not mentioned: those of Marie Brossement, and Johannes & Luise Ress. On September 18, 1915 she made her paid professional debut as the »First Bridesmaid« in Carl Maria von Weber’s Freischütz at the Vienna Volksoper.

The search for reviews during her two years at the Volksoper found none, but a daily newspaper did report:

Tomorrow, Tuesday, Mozart’s opera ‘The Marriage of Figaro’ will be staged for the first time this season with an almost completely new cast. Miss Rantzau sings the part of the countess, Miss von Flondor that of Susanne and Miss Schöne the cherub.
Wiener Zeitung, June 27, 1916, p. 11

Lotte SCHÖNE sang in around 30 productions at the Vienna Volksoper, starting as »Cherubino« (the count’s page) in The Marriage of Figaro on June 27, 1916, but she only achieved her reputation as a brilliant Mozart singer later at the Vienna Court and State Opera.

On September 16, 1917 Lotte SCHÖNE made her debut at the Court Opera as »Papagena« in Mozart’s Magic Flute – her most frequently played soubrette role during her nine-year engagement in Vienna. In 1926, thanks to the recommendation of Bruno WALTER, she found a permanent position in Berlin.

In the meantime Lotte SCHÖNE’s marriage had failed. She converted to Protestantism and she married the businessman Paul Flandrak, (who had also changed his religion) in the Lutheran City Church of Berlin on October 28, 1921. The couple had a daughter: Inge Maria.

On August 14, 1922 Lotte SCHÖNE made her debut at the Salzburg Festival as »Zerlina« in Mozart’s Don Giovanni under the musical direction of Richard Strauss:

… and among the ladies, Frau Schöne offered the most appealing sample of a delicate and yet very rich talent as Zerlina, …
Erwin H. Rainalter, Salzburger Volksblatt, August 14, 1922, p. 3f.

In the annals of the Salzburg Festival from 1922 to 1935, it is documented that Lotte SCHÖNE performed primarily in soubrette roles in Mozart operas: as »Cherubino« and »Susanna« in The Marriage of Figaro, as »Despina« in Cosí fan tutte, as »Blondchen« in The Abduction from the Seraglio, as »Zerlina« in Don Giovanni and as »Pamina« in The Magic Flute.

Lotte SCHÖNE sang her »Pamina« for the last time in the 1933 festival summer – while Austria suffered under the authoritarian rule of Engelbert Dollfuss. Bruno WALTER conducted the performances as in previous years.

The set designer and architect Oskar Strnad directed the Salzburg Magic Flute for the first time – just a few weeks after a new Magic Flute was staged at the Vienna State Opera under the musical direction of Clemens Krauss (and set designer Alfred Roller).

This gave the Viennese music critic David Josef Bach (who headed the Social Democratic Art Agency until 1933) the unique opportunity to compare the Salzburg Magic Flute with the one in Vienna:

… with all due respect for the Viennese work, the Salzburg performance is mentally, scenically and musically the superior one. This time, Oskar Strnad didn’t just understand how to make the spirit of the work visible as the stage designer, but also did so as the director …
Musically, the performance under Bruno Walter is appropriate both to the dignity of the opera and to the character of this popular music fed from all the sources of the genius [Mozart]. A real magic performance in every sense of the word unfolded.
… Lotte Schöne sang Pamina in an extraordinarily beautiful and exemplary manner. Shouldn’t it be possible to win back such an artist for Vienna, especially as a master singer?
Dr. D. J. Bach, Arbeiter-Zeitung, August 21, 1933, p. 3

The music critic David Josef Bach knew when he suggested this that as a Jew Lotte SCHÖNE had been expelled from her position in Nazi ruled Berlin in June 1933. Despite his public endorsement, the Vienna State Opera showed no interest in employing Lotte SCHÖNE, so she moved to Paris with her family.

In the 1933 summer festival, however, Lotte SCHÖNE still appeared as the »Fairy King« in Carl Maria von Weber’s romantic opera Oberon, which Bruno WALTER also directed. When Bruno WALTER conducted Gustav Mahler’s 4th Symphony in the Great Hall of the Mozarteum on August 2, 1933, Lotte SCHÖNE sang the soprano solo – but failed to impress the critics.

Lotte SCHÖNE had her triumphs primarily as a Mozart singer under the conductor Bruno WALTER – both in Paris, for the first time in the early summer of 1928 at the Mozart Festival (Cycle de Mozart) at the Opéra Comique, and in Salzburg, most recently in the 1934 and 1935 summer festivals in Don Giovanni with Lorenzo da Pontes Italian libretto.

When she made her last appearance in Salzburg as »Zerlina« in Don Giovanni, an interview was published in the Neue Wiener Journal:

… The famous Salzburg production of ‘Don Giovanni’ is in Italian, as the avoidance of the more common title ‘Don Juan’ shows, and of course I also sing Zerlina in the original language of the text in this performance.
I feel very comfortable with all the famous Italian singers, even though German is my mother tongue, because in the fifteen years of my stage career I have had to change my artistic home three times and to sing in many languages! […]
Neues Wiener Journal, August 28, 1935, p. 11

Lotte SCHÖNE had no regular position during her Paris exile, but was still able to make some well appreciated performances: for example, she appeared as »Adele« in a production of the Viennese operetta Die Fledermaus that Max REINHARDT produced in the Théâtre Pigalle at the end of 1933, and as »Marzelline« in Fidelio and as »Zerlina« in Don Giovanni in June 1936 with Bruno WALTER conducting at Paris’ Grand Opéra.

She was also supposed to participate in concerts with the Palestine Orchestra, founded by Bronislaw Huberman (Israel Philharmonic Orchestra since 1948), but these concerts failed to materialize.

Lotte SCHÖNE did manage a few more appearances in Paris before the occupation by Nazi Germany in June 1940.

After that she lived in Nice with her family, her brother Moritz and her parents who had fled from Vienna — in the »Zone libre« initially administered by the French Vichy regime but later also occupied.

Thanks to the help of French friends, Lotte SCHÖNE was able to survive the war years in remote places in southern France while using the alias Lucienne Sorbier. After the liberation, she was reunited in Paris with her family, including her son Kurt.

Kurt’s father Paul Schönwälder had committed suicide in Vienna in May 1938.

Lotte SCHÖNE gave concerts once again in liberated France, and then too in Germany and Austria as part of the »Expansion culturelle française«, including one in Vienna in September 1946 after the liberation:

At the invitation of ‘Expansion culturelle’ Lotte Schöne, the former coloratura soprano of the Vienna State Opera and darling of the public, was heard again in Vienna after a long absence. She sang a cultivated program of Austrian and French songs, which included Mozart, Schubert, Duparc and Debussy …
Despite being handicapped by indisposition, the artist achieved a welcomed success, which was also expressed in pretty flower donations. At the piano Claire Lipmann accompanied her sympathetically.
Dr. E. Herzog, Die Weltpresse, September 26, 1946, p. 6

But nothing was said in the Austrian press about why there had been such a long absence or anything about the afflictions that displaced Jews like Lotte SCHÖNE had to endure under the racist terror in France.

When Lotte SCHÖNE sang waltz songs by the brothers Johann and Josef Strauss at a festival in Cannes on the Côte d’Azur in February 1948, extremely friendly reports appeared in Austria.

Today, except for this stumbling block, there are no mentions of her name in any public spaces in the Austrian cities where she had once been a famous performer. 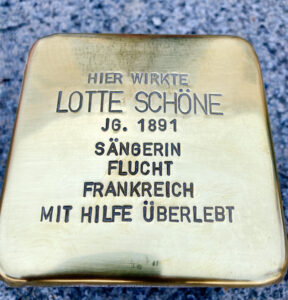 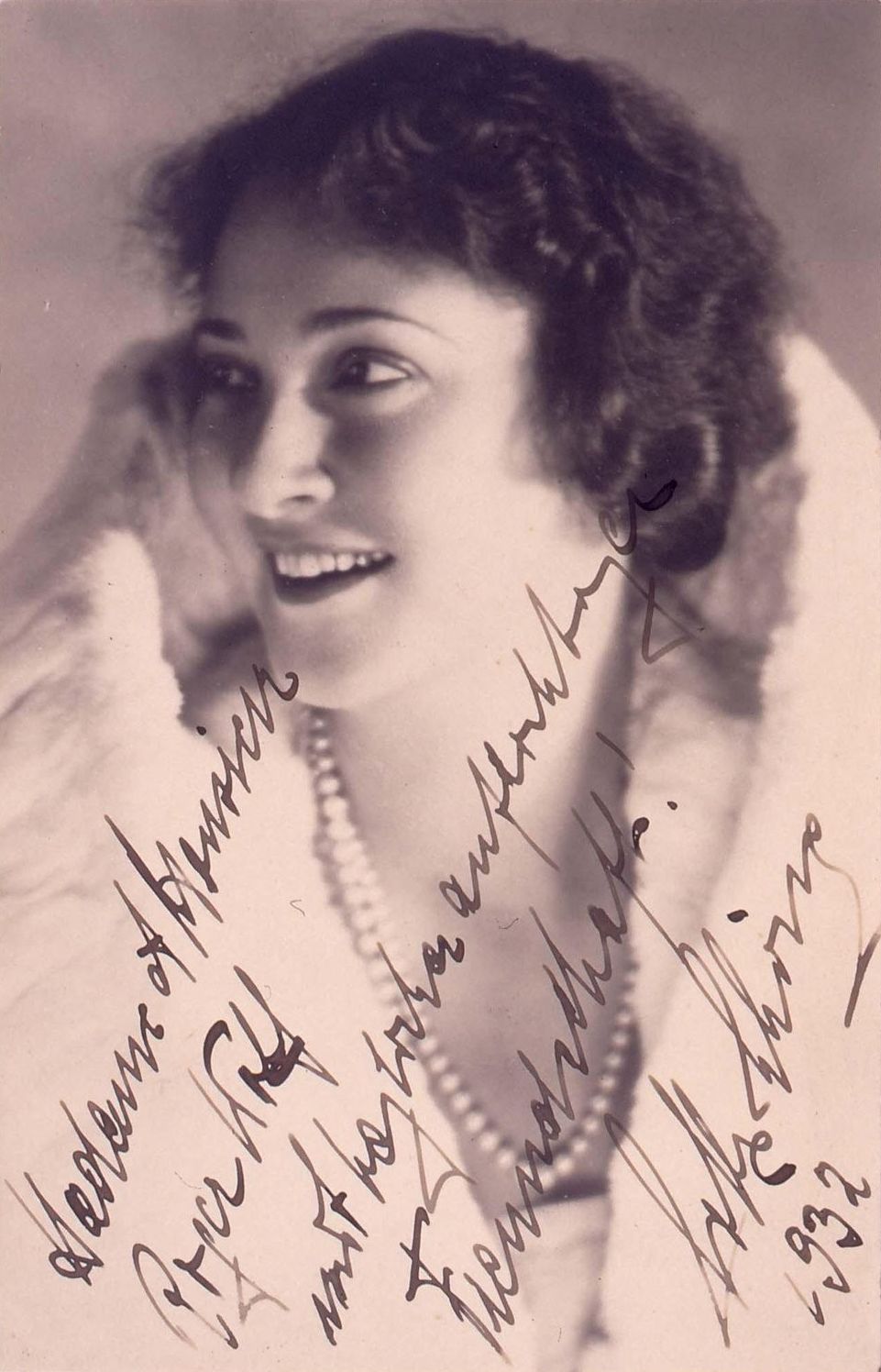