Ignaz GRABLER was born in the Salzkammergut village of Unterach (on the Attersee lake in Upper Austria) on March 24, 1884. He was a married Catholic railroader with one son and he worked as a fireman for the Austrian National Railway (ÖBB). The Grablers had local citizenship rights in the municipality of Gnigl (which included the Itzling neighborhood until both were annexed to the city of Salzburg) and lived at 14 Itzlinger Hauptstraße.

Given the lack of documentation, nothing is certain about his party membership or political activities under the Austro-Fascist dictatorship, but it is likely that like most of his fellow railroaders Ignaz GRABLER belonged to the Social Democratic Labor Party before it was banned in February 1934. He probably had some contact afterwards with the activists of the illegal parties that had been outlawed by the dictatorship. It is certain, however, that under the Nazi regime he was a member of the resistance organization of the Austrian Communist Party that had been reactivated by Franz OFNER. Franz BROŽ was recruited for this group in the »Reichsbahnwerkstätte« [German National Railways workshop] by Josef HAIDINGER in the spring of 1941. From then until November 1941 he paid his monthly dues of one Mark and got two Communist leaflets or pamphlets to read and pass on to other comrades. At the start of 1942 the Gestapo managed to insert an undercover into the resistance networks of the Communists and Socialists — and that enabled them to roll up and smash the networks. As a result, at least 79 activists were killed in concentration camps or prisons, including 29 railroaders from the city and state sections of the two resistance organizations.

Ignaz GRABLER was arrested by the Gestapo on March 6, 1942 and held at first in the jail of the Salzburg State Court. He was transferred to the Bavarian prison in Landsberg am Lech in August 1942 before being returned to Salzburg for trial in November. In the five trials that the Vienna Superior Court held in Salzburg between November 23 and November 27, 1942 30 activists from the illegal KPÖ, all railroaders, were sentenced to 212 years imprisonment for »conspiracy to commit treason«. Two of the 30, Josef KUMHART and Karl STEINOCHER failed to survive their mistreatment while in Nazi custody. Four others, Franz BROŽ, Johann Bruckmoser, Ignaz GRABLER and Lorenz KÜNSTEL, also died from their injuries, but after the liberation of Austria.

On November 25, 1942 Ignaz GRABLER was sentenced to six years imprisonment and in January 1943 he was transferred to the prison in Straubing Bavaria. He was freed by US troops on April 25, 1945 while he was on a forced march from the Straubing prison to the Dachau concentration camp. Ignaz GRABLER returned to Salzburg on May 28, 1945, but had to take a disability pension because of the severe damage to his health from mistreatment in prison and concentration camp. He died in Salzburg from the consequences of his mistreatment on August 27, 1949 — he was 65 years old.

As his survivor in liberated Austria his widow Marie was eligible for victims’ compensation and died in Salzburg at age 73. 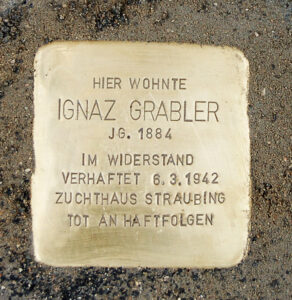 All stumbling stones at Itzlinger Hauptstraße 14