Johann GRABER was born in Munderfing, Upper Austria (near Braunau) on February 21, 1918 and was the only child of the Catholic couple Therese and Johann GRABER – who divorced in 1935.

Their son Johann jr. attended a trade school and lived with his laundress mother in the Salzburg neighborhood of Parsch. Under the Austrian dictatorship he was initially a typist in the state headquarters of the »Young Fatherland« organization that was attached to the paramilitary »Homeland Defense«.

Later he became district secretary for the »Austrian Youth« section of the dictatorship’s unity party, the »Fatherland Front« that was formed in 1933 and modeled on the Italian fascist party. In March 1938 the Nazi regime dissolved and outlawed it. When the German army was mobilized in August 1939 the 21 year old Johann GRABER became a typist for the Mountain Communications-18th Reserve Division of the XVIII Army Corps in Salzburg.

Otto HORST was born in Ratsch, in the Leibnitz district of Styria on July 15, 1886. He was a high school graduate and an officer in the Austro-Hungarian army who graduated from the technical university in Vienna and then became a civil engineer in Styria – in Fohnsdorf and Andritz near Graz. Until February 1934 he was a member of the Social Democratic Labor Party and a leader of its Republican Defense League militia.

Otto HORST had a stroke, and after his recovery he was a contractual employee of the Styrian State government’s Works Department – where he was required to become a member of the Austrian Dictatorship’s »Fatherland Front« political organization.

After the annexation of Austria to Nazi Germany he volunteered for German army service at age 53 and in January 1940 he was made a first lieutenant in the reserve and served as code officer for the Mountain Communications-18th Reserve Division of the XVIII Army Corps. He was in service there when he was arrested by the Gestapo on September 4, 1940, eight days after GRABER’s arrest.

GRABER and HORST had to spend three years and three months in jails or prisons before they came to trial. Only Johann GRABER’s places of imprisonment are known: police jail until an investigative judge issued a formal warrant on April, 9, 1941, then the Salzburg State Court jail until he was transferred to prison in Berlin-Moabit in September 1941.

On of these three judicial murders is hardly known: that of a railway inspector named Nikolaus SCHWARZ, who was guillotined in the Munich-Stadelheim prison on February 10, 1944 for »treasonously aiding the enemy« by allegedly calling on French POWs to engage in an armed rebellion. That was eight days before GRABER and HORST suffered the same fate.

Nowhere in the surviving documents is it made clear why corporal GRABER and first lieutenant HORST, who were members of the German Army, weren’t brought before a court martial rather than the so-called »Peoples’ Court«. In the justification for GRABER’s death sentenced it says that in the Spring of 1940 he had taken part in the creation of an illegal organization called the »Homeland Front« that aimed to liberate the »Ostmark« [the Nazi’s name for Austria] from Nazism and reestablish Austria as an independent state.

The verdict claimed that in leaflets GRABER had produced in his workroom it was claimed that the war was not defensive, but was a war of conquest by Hitler and his bigwigs to subjugate and enslave the peoples of Europe. The verdict doesn’t claim that Otto HORST took part in creating the resistance movement or producing the leaflets, just that HORST had disregarded his loyalty oath to the »Führer« as an officer and had regularly obtained GRABER’s leaflets and had thereby encouraged his subversive activities – and had done so out of his own Marxist principles.

On December 2, 1943 the 6th Senate of the Berlin »Peoples’ Court« sentenced the two defendants GRABER and HORST on these grounds to death and »lifelong dishonor« for »conspiracy to commit treason«.

The appeals to the »Führer« for mercy by Johann GRABER’s mother and the relatives of Otto HORST were ignored. The 25 year old Johann GRABER and the 57 year old Otto HORST were moved from Salzburg to the Munich-Stadelheim prison and they were beheaded by the executioner there on February 18, 1944. The implementation report said:

The execution process took 1 minute 5 seconds to 1 minute 7 seconds for leaving the cell, the handing over to the executioner and the fall of the blade 5 and 7 seconds respectively. There are no incidents or other events of significance to report. Signed, Kummer.

Beloved mother of my heart!
May the all merciful God give you the strength to endure this heavy blow, that I can’t protect you from in my last hours of life. Today, at 5 in the afternoon I will go from life to death reconciled by my creator. Allow me im my last hours to thank you dearest mother for your endless great love that you have always given me.
Thanks for all your efforts that you have made for me from the hour of my birth until today. Think in the future to pray for my soul, as my last thoughts will be a prayer to the creator for you. Remember that the lord God will find me worthy to part from life with the consolation of the holy religion.
Although I had tried to adorn your existence, God’s purpose had it otherwise. Forgive me all my trespasses against you my beloved mother. […]
Forgive all others too, as I take no hateful thoughts with me to the hereafter. I greet my dear homeland and God, who have graced my life. I greet all those who think of me in these hours. […] And now beloved mother, I leave you in the face of the redeemer in spirit again in your embrace your eternally loyal Hansl

His mother Therese GRABER, who was severely ill, died in Salzburg at age 53 in December 1952 in Salzburg and so didn’t live to see the naming of a street in the Aigen neighborhood of Salzburg after her son Hans GRABER in 1965. 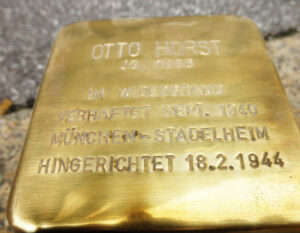 All stumbling stones at Paris-Lodron-Straße 9