Bela Baruch SPIEGEL was born in Kaisersdorf in what is now Austrian Burgenland (Csaszarfalu, Komitat Sopron/Ödenburg, in Hungary), on April 10, 1872. He was a Jewish shopkeeper who was on the board of directors of the Salzburg Jewish Community organization. His wife Therese SPIEGEL, née POLLAK, was also Jewish and had been born in Edelstal bei Kittsee in what is now Austrian Burgenland (Nemes Völgy, Komitat Moson/Wieselburg, Hungary) in 1874. The SPIEGELs had operated an antique shop in Salzburg since 1906 and they lived with their adopted son Ladislaus at 11 Faberstraße in the middle class Andrä-Quarter. This building was one of the big city style »Heller-houses«, that had been built in the late 19th century along with the palatial »Faber-houses« on the nearby Rainerstrasse, and which were called »Jew houses« in Antisemitic Salzburg.1

Bela Baruch and Therese SPIEGEL’s antique shop was across the river at 34 Getreidegasse (next to the entrance to the Sternbräu). On the night of November 9-10, 1938 it was devastated in the so-called »Reichskristallnacht«/Night of Broken Glass pogrom when Nazi Storm-troopers and SS men led by a native Salzburg SS man named Hermann Höfle.2 Then the SPIEGELs had to clear out of their lovely apartment in the Andrä-Quarter so that it could be turned over to a Nazi block warden who worked as a school janitor. They fled to Vienna and lived at 18 Große Stadtgutgasse in the 2nd District. On July 14, 1942 they were deported to the Theresienstadt concentration camp along with their former Salzburg Andrä-Quarter neighbors, the Aningers and Fischers.

On October 28, 1942 Bela Baruch SPIEGEL was murdered there at age 70. About five weeks before his death, on September 21, 1942 his 64 year old wife Therese SPIEGEL was shipped out in »Transport Bp« from the Theresienstadt concentration camp to the Treblinka death camp, along with her fellow Salzburg expellees Amalie Rosenfeld, Anna Pollak and Anna Stuchly. They were all murdered there.

The fate of their adopted son Ladislaus SPIEGEL is unknown. He had been born in Lackenbach Hungary (in what is now Austrian Burgenland), only 10 kilometers away from Bela Baruch SPIEGEL’s birthplace in Kaisersdorf, on January 27, 1914. In November 1938 he was imprisoned in the Dachau concentration camp and he was only released when he agreed to leave the country. What is certain is that he was registered in Salzburg until November 1938 and that he was registered in Vienna until April 1939 (»deregistered to Moosbrunn« a few miles away). At that point we lose track of him, but his name does not appear in the Shoah Databank of murdered Jews. We do find Bela Baruch’s brother Albert SPIEGEL, his wife Katharina and their son Armand in the databank. They had lived in Salzburg for a while and then lived in Vienna before being murdered at the Maly Trostinec death camp on June 15, 1942. Another family related to the SPIEGEL brothers that had lived in Salzburg for a couple of decades appears in the Shoah Databank: Samuel SPIEGEL, his wife Hedwig and their two children – Gustav who had been born in Salzburg on February 13, 1912, and Gertrud, who had been born in Salzburg on July 7, 1914 and whose married name was Havlinova. They all lived in Prague before they were deported from there and murdered.

1 The reason why there are so many Stumbling Blocks in the Andrä-Quarter has to do with the concentration of Jewish residents in the area. The Jewish families Altmann, Aninger, Bäck, Bonyhadi & Bonyhadi, Havas, Klüger, Löwy & Löwy, Pollak & Pollak, Popper, Rosenthal, Schönbrunn, Schönhorn, Schwarz-Kohn, Singer, Soyka, Spiegel, Stein, Weihs, Weinstein-Steindler and Winkler all lived in the Heller-house and Faber-house buildings on the Rainerstraße, Franz Josef-Straße, Faberstraße and Hubert Sattler-Gasse that named after the Vienna developers Moritz Faber and Josef Heller. The building at 12 Franz Josef-Straße was built around the same time and until 1929 it belonged to Jenny Nalos, née Fuchs, and the Jewish families Nalos-Fuchs, Löwy-Fuchs and Fischer all lived there.

It is also worth noting that seven Heller-houses at 6 and 8 Franz Josef-Straße, 7, 9 and 11 Faberstraße, 5 and 7 Hubert Sattler-Gasse, had belonged to Samuel Gump, Eugen Weil, Emmy Weil-Gump and Meta Braun-Gump since 1920. They were all Swiss citizens so the Nazis were unable to simply expropriate and sell their properties.
The building at 11 Franz Josef-Straße/16 Faberstraße belonged to Jewish family from Vienna named Weissenstein. Until 1938 the Sanatorium Hromada which was favored by Jews was located there. The building’s ownership wasn’t taken over by the Nazis, but the building itself was occupied by the German Army which set up a »Sanitary Research Institute« there. One of the owners, Margarethe De Francesco, née Weissenstein, was murdered in the Ravensbrück concentration camp. The surviving owners sold the building after the end of the war.

The Jewish attorney Dr. Josef Weihs was married to a Catholic and he converted to Catholicism in 1940. He was prohibited from practicing under the Nazi regime, but he continued to live in the Faber-house at 2 Rainerstraße. As a contemporary witness he made accurate records about the Salzburg »Aryanizers« and others who profited from the expulsion of the Jews. Dr. Weihs later provided aid to damaged Jewish families and he died in Salzburg in 1958.
Ludwig and Helene Löwy lived in the Heller-house at 6 Franz Josef-Straße until November 1938 and they were among the few expellees who returned from exile to liberated Salzburg. Ludwig Löwy was the son of Rudolf Löwy, the president of the Jewish Community Organization who had lived at 5 Hubert Sattler-Gasse until his death in 1935. After his return to Salzburg he took up his father’s position as president. Ludwig and Helene Löwy died in Salzburg and were buried in Tel Aviv where their daughter lived (Liselotte Papo, who had been born in Salzburg in 1924).

Finally, it is worth noting that the synagogue at 8 Lasserstrasse, which had been built in 1901, wasn’t far from the Andrä-Quarter. The synagogue was the headquarters of the Jewish Community Organization that had been founded by Rabbi Dr. Adolf (Abraham) Altmann in 1911. From 1907 to 1914 Dr. Altmann lived with his family in the Heller-house at 11 Faberstraße 11. Their children Erwin, Hilda, Manfred and Edith were all born during those years. Edith, who died in infancy, was buried in the Jewish cemetery in Salzburg-Aigen (her headstone was destroyed under the Nazi regime).

Dr. Adolf Altmann was chief rabbi in Trier Germany (Rheinland-Pfalz) from 1920 to 1938. He was murdered in Auschwitz along with his wife Malvine, their son Wilhelm who had been born in Meran (in South Tyrol which was part of Austria-Hungary before it was turned over to Italy after WWI), and their daughter Hilda who had been born in Salzburg on March 18, 1909 – along with Hilda’s husband Maurits van Mentz and their sons Benno and Robert.
In 1988 a street in the city of Salzburg was named after Dr. Adolf Altmann. Dr. Altmann’s book, the History of the Jews in the City and Country of Salzburg was republished in 1990 (Otto Müller Verlag, Salzburg). His memoires of his time as an Austro-Hungarian Army Field-Rabbi were published in 1993 as a special section in Ein ewiges Dennoch: 125 Years of Jews in Salzburg (published by Marko M. Feingold, Vienna 1993).

2 Adolf Eichmann received a coded radiogram from SS-Sturmbannführer (Major) Hermann Höfle on January 11, 1943 reporting that by the end of 1942 1,274,166 Jews had been murdered at the Lublin-Majdanek, Sobibor, Belzec and Treblinka death camps. The radiogram was decoded at the time by the British Secret Service but it was only released to the public in 2000. That brought the role of the Salzburger Hermann Höfle back into view (Peter Witte, Stephen Tyas: »A New Document on the Deportation and Murder of Jews during ‘Einsatz Reinhardt’ 1942«, Holocaust and Genocide Studies 15:3, pp. 468-486). Hermann Höfle had been born in Itzling neighborhood of Salzburg (formerly part of the Gnigl municipality) on June 19, 1911 and was a mechanic and chauffer in Salzburg when he helped organize the November 1938 pogrom in Salzburg for the SS. He was rewarded for his activity by being given the apartment at 13 Hubert Sattler Gasse that had belonged to the expelled Jew Adolf Jakoby (the apartment was kept by Höfle’s family until 1946). During the extermination campaign in the »Generalgouvernement« of Poland he was the »Jewish Officer« on the staff of the Higher SS and Police Commander Odilo Globocnik. As the »Jewish Officer« he was the organizer of »Aktion Reinhard«, which means he was one of those mainly responsible for the extermination of Jews in of Poland. Hermann Höfle returned to his family in Salzburg in 1947 and lived in the in Parsch neighborhood until his role in the Holocaust was brought out during the trial of Adolf Eichmann. After he was arrested, Höfle hanged himself in his cell in Vienna on August 21, 1962 (see: Winfried R. Garscha: Das Scheitern des ‚kleinen Eichmann-Prozesses’ in Österreich). 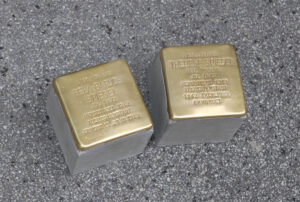 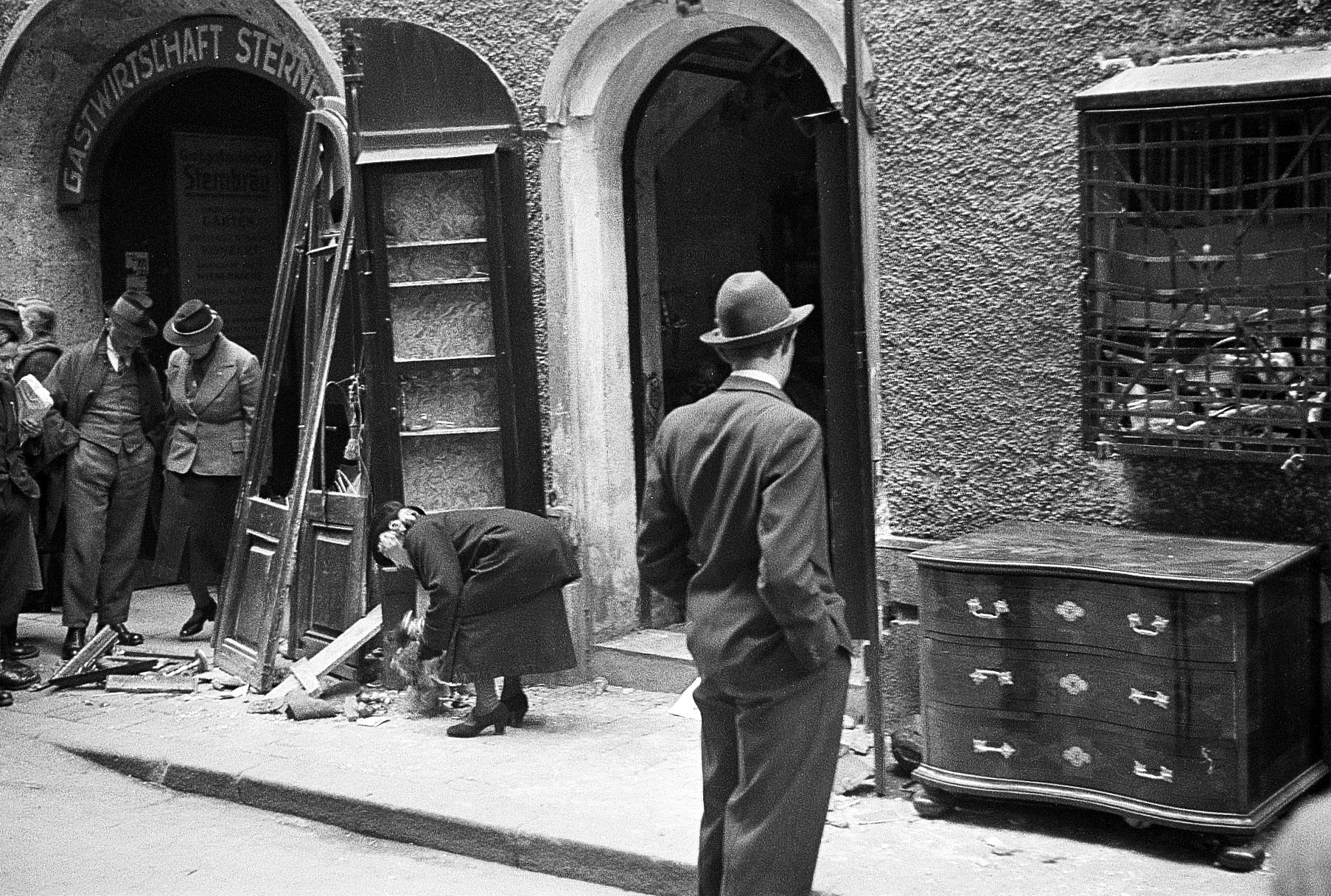 Anna Pollak in front of her store (Getreidegasse 34), that was destroyed at the »Reichspogromnacht« by SA-troups.
(Photo: Stadtarchiv Salzburg/Fotoarchiv Franz Krieger) 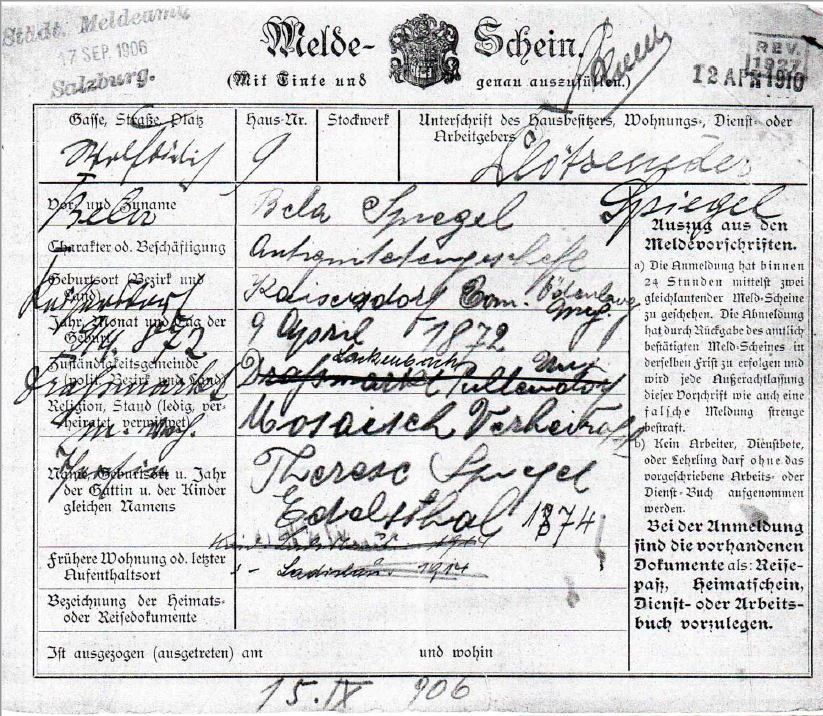 All stumbling stones at Faberstraße 11