Alexander KIPNIS was born in Zhitomir in the Russian Empire (now it is Schytomyr in Ukraine) on February 1, 1891. He was one of the five children in the poor family of the Jewish couple Machlya (Chaika) and Shaya Yankel (Issay) Kipnis.

More than a third of the residents of the then small town were Jewish. After the German attack on the Soviet Union in June 1941, most of the Jews living there were murdered.

Alexander KIPNIS, who became a famous opera singer in major European and American music centers, started as a singer in small Eastern European synagogues when he was young. As his son Igor told an interviewer from the New York Times:

I was not really aware of his career, said Mr. [Igor] Kipnis. I was brought up the way European children were: you could be seen but definitely not heard from. But if he went to Buenos Aires, the whole family would go off. It was terribly glamorous.
The singer’s life began without glamour, his son said. He was born in a Ukranian city, Zhitomir, on Feb. 1, 1891, and the family was incredibly impoverished, Mr. [Igor] Kipnis said.
The only thing he had going for him and, in the beginning, was a boy soprano. He sang in synagogues to make a little bit of money until his voice changed. One Year of School. Then he worked in a furniture factory during the day and also worked for a theatrical troupe doing Yiddish plays and musicals, until the anti-Semitic wave caused the troupe to be closed down.
Then he took himself off to Poland, where he continued to sing in synagogues until he learned he could enroll in the Warsaw Conservatory without the equivalent of a high school diploma. He had had only one year of schooling.
The New York Times, Feb. 24, 1991, p. 12

Alexander KIPNIS went to Berlin to study singing with Ernst Grenzebach and was interned as an enemy alien when the war between Germany and Russia began in 1914. A German officer who was the brother of a German opera house manager heard him singing in the camp and arranged for him to be released.

In 1915 he was engaged as a bass singer in the Hamburg Opera. He shifted to the Wiesbaden Opera in 1917 and began singing at the Berlin Staatsoper in 1922. He also began commuting between Europe and America after participating in a touring Wagnerian Opera company in 1923.

From 1923 to 1932 he sang at the Civic Opera House in Chicago, and it was there that he met Mildred Levy, who had been born in Halifax Nova Scotia and whose father was a musician in Chicago. They got married in Chicago in 1925.

In 1931 Alexander KIPNIS, his wife and their Berlin born son Igor acquired US citizenship. But for the brilliant bass singer KIPNIS, who specialized in Richard Wagner’s operas, Berlin and Bayreuth still had priority. He loved to sing the role of the Christian Knight of the Grail »Gurnemanz« but that didn’t lead him to abandon his Jewish faith.

In June 1929 Alexander KIPNIS made his first guest appearances at the Vienna State Opera: performing as »Mephistopheles« in Gounod’s Faust and as »Sarastro« in Mozart’s Magic Flute.

He did not make his next guest appearance in Vienna until January 1934, when general music director Fritz Busch, who the Nazis had driven out of Dresden, conducted Beethoven’s Missa solemnis in the Konzerthaus. The bass singer pleased the music critic Max Graf who wrote:

… Alexander Kipnis, owner of a particularly beautiful, soft and also deeply pleasant bass, which one would like to get to know better.
Der Wiener Tag, January 16, 1934, p. 7f.

KIPNIS was contracted to sing at the Berlin Opera and despite the Nazi’s purge of Jews he couldn’t be easily dismissed because he was a US citizen. The Vienna State Opera wanted to welcome the »most famous bass« with open arms, but KIPNIS spent the next few years on tour in South America: 1934, 1935 and 1936 in Rio de Janeiro, Buenos Aires and Montevideo.

After that Alexander KIPNIS joined the Vienna State Opera for three years. There he sang his favorite role as »Gurnemanz« for the first time on November 1, 1936. Shortly after that he sang Jewish songs in the Konzerthaus for the Chanukah season »Maccabee celebration« of the Vienna Zionist organization.

A Jewish newspaper printed an enthusiastic report about his concert:

… and the well-known song “Raisins with Almonds” [Rosinkes mit Mandeln ] by the famous chamber singer Alexander Kipnis: his incomparable art of singing, musical culture at the highest level, fantastic breathing technique, magnificent diction, ideal balance in all registers, the indescribable beauty of the timbre of his voice resembling Chaliapin at his best, and especially the expressiveness impressed the audience deeply; the audience went wild with enthusiasm and demanded the repetition of the song ‘Raisins with Almonds’.
Die Stimme, December 10, 1936, p. 3

Alexander KIPNIS also gave concerts for the »Culture League of German Jews« in Nazi Germany – giving the last ones in Düsseldorf and Hamburg in February 193. At the Vienna Festival Weeks in June 1937, he sang the role of the Germanic legendary figure »Hunding« in Wagner’s Die Walküre once more.

It seems that Alexander KIPNIS led an artistic life that moved in parallel and contrary worlds.

As early as April 1937, the Neue Wiener Journal reported on the participation of the world-class bass singer under the musical direction of Arturo TOSCANINI at the Salzburg Festival: Alexander KIPNIS as »Rocco« in Fidelio, as »Sarastro« in The Magic Flute and on top of that as »Orgelbass« in Verdi’s Requiem.

»It was terribly glamorous« – are words from his son Igor that especially apply to the atmosphere at the opening of the Salzburg Festival under Maestro TOSCANINI on July 24, 1937 where there were a lot of celebrities. Seated in the first row were Sara D. Roosevelt, the mother of the President of the USA, along with two socially prominent foreign fans of the Third Reich, the recently married Duke of Windsor, formerly King Edward VIII of Great Britain, and his new wife, the former Mrs. Wallis Simpson of Maryland [after their stay in Salzburg they went to Germany and met with numerous high ranking Nazis before having tea with Adolf Hitler in Berchtesgaden]:

… The clothing and jewelry of the Duchess of Windsor were particularly admired.
Salzburger Volksblatt July 26, 1937, p. 5

The critics also paid tribute to artists like Alexander KIPNIS in his role as »Rocco« in Fidelio:

An artistic event of the first order, albeit less glamorous, was the premiere of The Magic Flute on July 30, 1937 under Arturo TOSCANINI with Alexander KIPNIS as »Sarastro«:

… Kipnis lends Sarastro dignity and majesty and makes him the herald of the eternal ideal of humanity, not least through the abundance of his beautifully well-founded bass. …
The new design of The Magic Flute became a significant artistic event that was received by the audience with stormy enthusiasm and approval, and one of the great events of the festival season.
Dr. Hermann Ullrich. Neue Freie Presse, July 31, 1937, pp. 1-3

Alexander KIPNIS was able to bring his »organ bass« to life again in Salzburg when he was allowed to sing the bass part in Verdi’s Messa da Requiem (funeral mass) on August 14, 1937 under the leadership of TOSCANINI:

… With the requiem you forget that you are in a concert; the impression is so powerful that one can only cry and pray. When, after the ‘Kyrie’, the ‘Dies irae’ begins with a thundering sound, then the whole burden of one’s own guilt rests on the soul, the sound becomes corporeal and presses on the heart so that the breath stops.
‘Sanctus’ and ‘Benedictus’ were a consecration, on which ‘Agnus dei’ lay the pious calm of another being. And at the end the words of prayer in the soprano solo, which proclaim the eternal light, sounded as if entranced. The solo quartet had a grandiose organ point in Kipnis‘ velvety soft bass….
Gerechtigkeit, August 19, 1937, p. 7

Most of the divided world west and east could hear Alexander KIPNIS, because fifteen countries, including the US and the Soviet Union, carried broadcast performances of the Salzburg Festival, but the German Reich only broadcast Wilhelm Furtwängler’s concert of August 27, 1937.

From the middle of October to the end of December 1937, Alexander KIPNIS was on a concert tour in the US. When he returned to Austria – his wife and son stayed in Chicago – he sang »Rocco« in Fidelio, »König Marke« in Tristan und Isolde and other bass roles at the Vienna State Opera.

Before he set off for a two-month concert tour in Australia, as a crowd favorite he gave a farewell concert in the Great Hall of the Musikverein on February 22, 1938 – »[just]for this season« was emphasized, but it was his last concert in Vienna and his last appearance in Austria:

Alexander Kipnis said goodbye to the Vienna audience for this season in the main Musikverein hall. It was not a wistful farewell party, but an evening full of color and tension, rich in highlights and surprising twists and turns because Kipnis not only sang arias from his bass repertoire, but also those from major baritone parts, the mad monologue of Sachs from the ‘Meistersinger’ and the song to the evening star from ‘Tannhauser’ …
Der Wiener Tag, February 24, 1938, p. 8

The cast of the opera Tannhäuser, which Arturo TOSCANINI and Herbert GRAF were supposed to rehearse for the 1938 Festival, was announced in November 1937.

Alexander KIPNIS was supposed to sing the role of »Landgrave«, but the role was given to the state opera singer Herbert Alsen after the Nazis took over. In the final phase of the war of extermination Alsen was on Adolf Hitler’s list of »God blessed« performers, but that didn’t stop him from being awarded the title »Kammersänger« [Chamber singer] in liberated Austria in 1947.

Before Germany started World War II Alexander KIPNIS was still able to perform in other parts of Europe, but when he arrived in New York on the Dutch passenger ship Johan Van Oldenbarnevelt on September 9, 1939, war was raging in Europe.

From then on, New York City’s Metropolitan Opera was the main center of activity for Alexander KIPNIS and his voice was heard for many years all across the US in frequent radio broadcasts of operas from there. After the end of his stage career, he was a sought-after voice teacher.

Alexander KIPNIS died in Westport, Connecticut at the age of 87 on May 14, 1978. His grave is in the Willowbrook Cemetery.

His wife Mildred died two years later. Their son Igor was a well-known concert harpsichordist and music writer. He died in Redding, Connecticut in 2002. 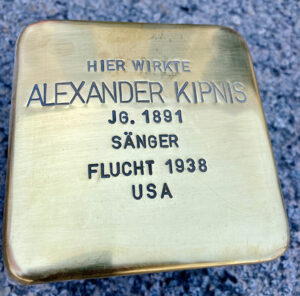 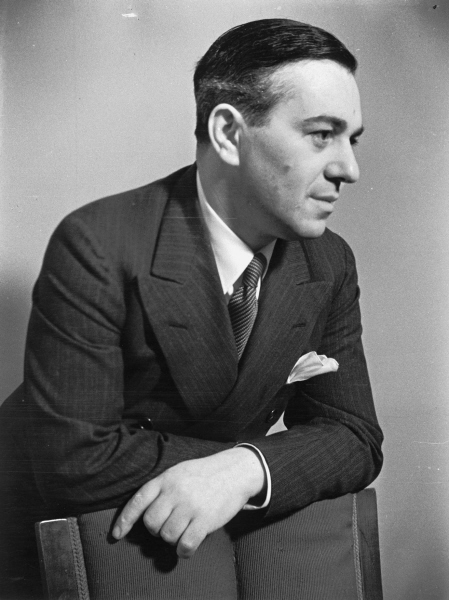