Heinrich Gittler was born in Salzburg on May 23, 1915. He was the first of six children of a Catholic couple Marie and Heinrich Gittler. Heinrich Sr. was a locksmith who died young and his widow remarried in 1930 while the children were still young. The family had local citizenship rights in Salzburg and lived in a city barracks on the Hellbrunnerstraße (now the Josef-Preis-Allee – Ulrike Gschwandtner-Straße).1

Heinrich Jr. became a skilled baker and remained unmarried. In the 1930s he lived in the Gnigl district which became part of the city of Salzburg in 1935. Presumably he came into contact with political activists there. The lack of police and judicial files makes it impossible to say anything for certain. He was 23 when the Nazis took over in 1938.

We do know that after the Nazis took over Gittler belonged to the Communist resistance organization reactivated by Franz OFNER. At the beginning of 1940 Anton SCHUBERT recruited him into the illegal Communist Party of Austria (KPÖ) where he was active in the Gnigl local and became its leader in early 1941. At the beginning of 1942 a Gestapo agent was able to infiltrate the resistance networks of the KPÖ and Revolutionary Socialists (RSÖ) and then the Gestapo arrested their members. At least 79 activists from the city and state of Salzburg were killed in the Nazi concentration camps and prisons, including 29 railroaders.

Heinrich Gittler, who had returned to living with his family on the Hellbrunnerstraße, was arrested by the Gestapo on January 18, 1942. He was held in the police jail at first and then in the Salzburg State Courthouse jail before being transferred to the prison at Landshut in Bavaria in April 1942. Then he was returned to the Salzburg Courthouse jail for trial. It isn’t well known, but in the spring of 1943 the Berlin »Peoples’ Court« tried 17 members of the KPÖ and RSÖ in the felony division of the Salzburg State Court. Twelve of them were sentenced to death and most of these were executed in the Munich–Stadelheim prison.

On April 9, 1943 Heinrich Gittler was sentenced to death for »conspiracy to commit treason« by the 6th Senate of the »People’s Court« sitting in Salzburg, and on July 15, 1943 the 28 year old was decapitated in the Munch-Stadelheim prison. In his last hours he wrote a moving parting letter to his family:

Now I have finished with my life because five o’clock today will be my last hour. I know how painful that will be for you. I will depart from life with a clean conscience. It may make it easier for you to know about my last hours. My thoughts were always with you. I thank you all the goodness you have given me and for the love that mother has given me.
My last wish is that you all live long and have a good future. Now I take my leave from you forever, forgive me for having caused you so much pain. Goodbye now my dearest mother, father, Antschi, Franz, Poldi and Kurt. I will die as I have lived. My last greetings to my good friends and relations. Your Heini!

Heinrich’s younger brother Franz had to serve in the German army and didn’t live to see the liberation: he was killed in April 1945. His mother applied in vain for victims’ assistance in liberated Austria as a surviving dependant of a victim of Nazi terror and died at age 61. The name Heinrich Gittler appears on a memorial for Salzburg railroaders who were murdered by the Nazi regime.

1 At least two victims lived in the city quarters on the Hellbrunnerstraße: Alois Fleischhacker, a polisher by trade, was killed in the Mauthausen concentration camp on January 6, 1940; and Ludwig Koller, an upholsterer, who was transferred from Dachau to the Buchenwald concentration camp on September 25, 1944 and was never heard from again. 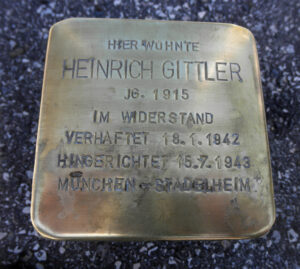 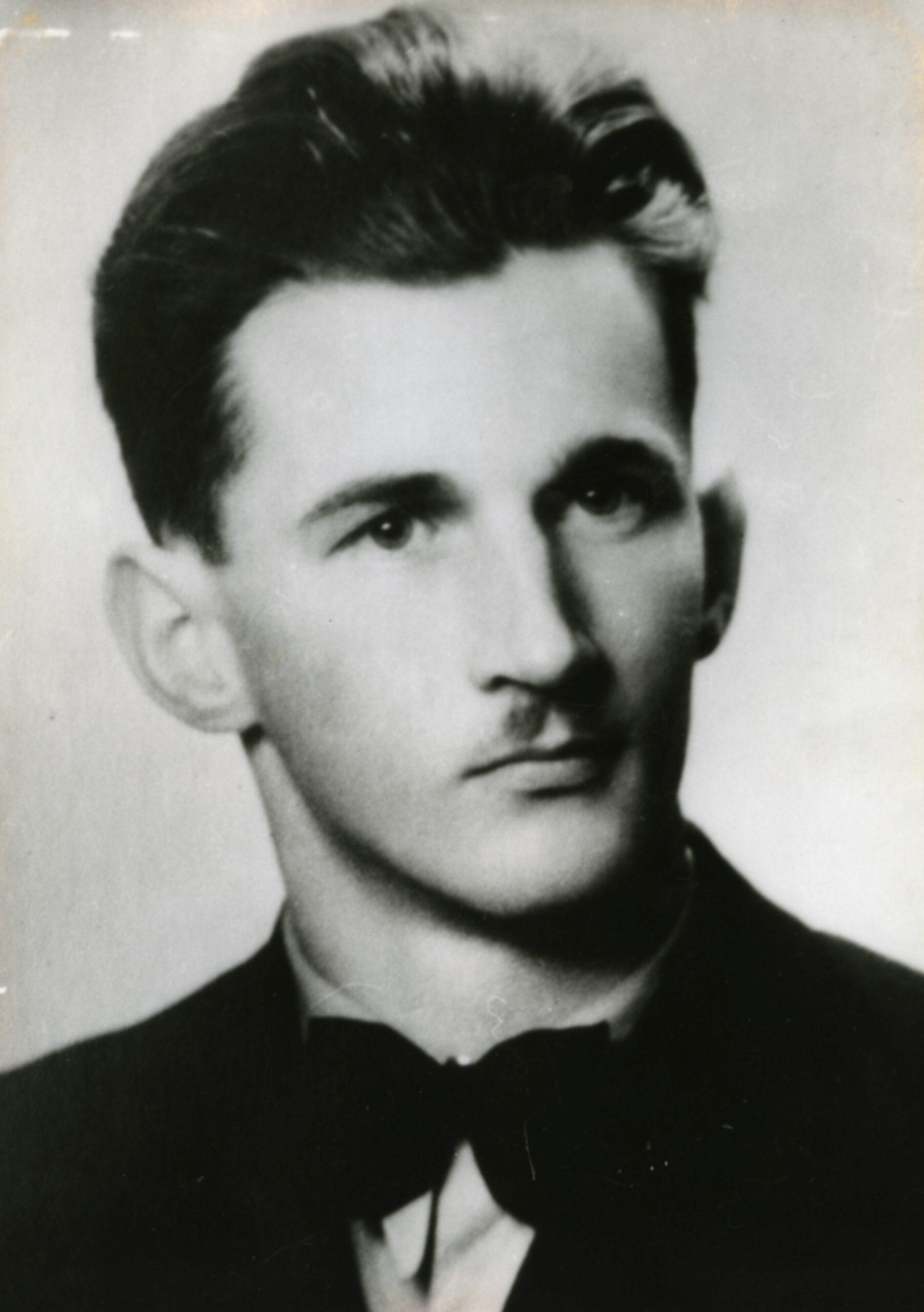 Heinrich Gittler
Photo: Archive of the Communist Party of Austria 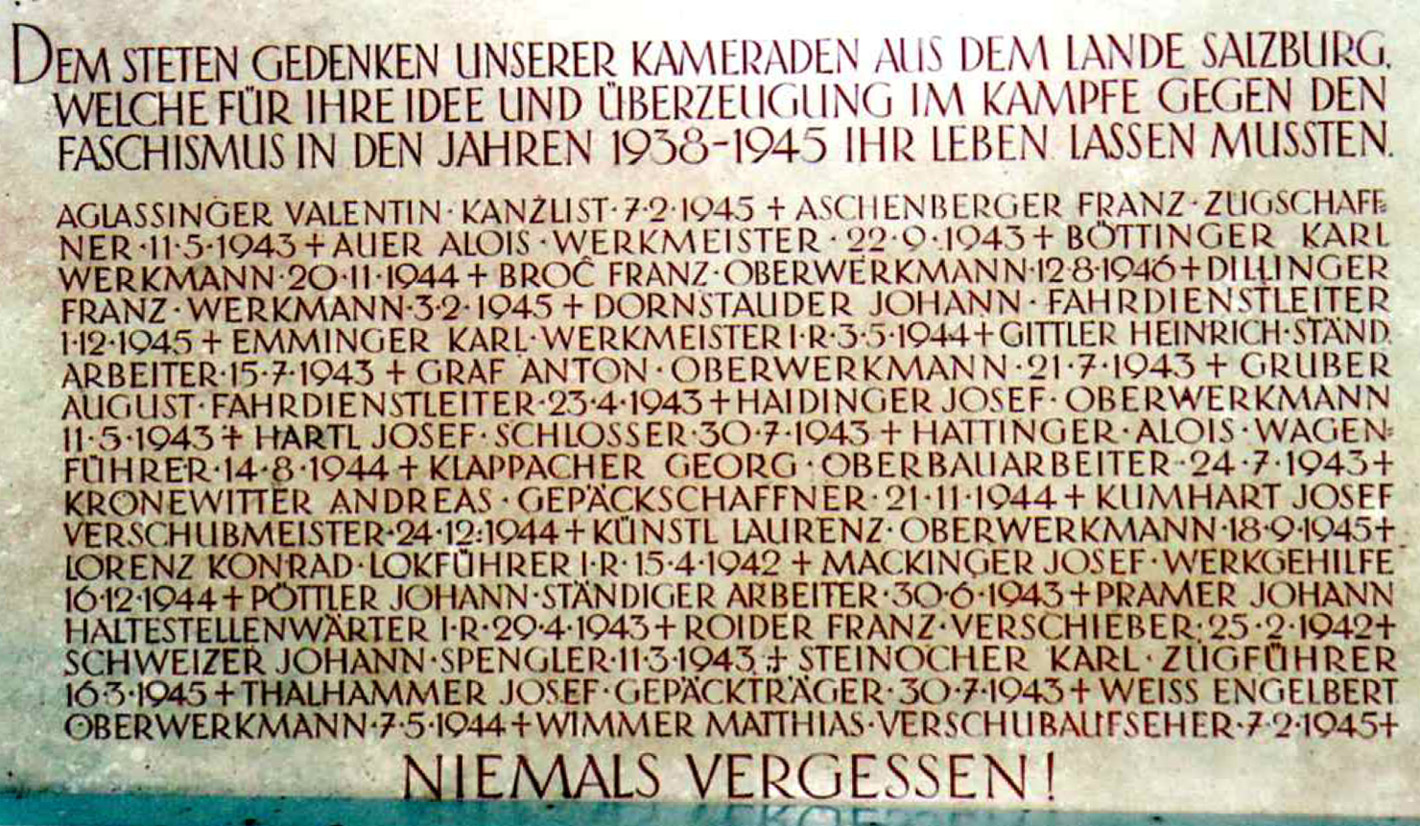 All stumbling stones at Ulrike-Gschwandtner-Straße 5