Brother Coelestine was murdered on 10 February 1944 in the Barth satellite camp. 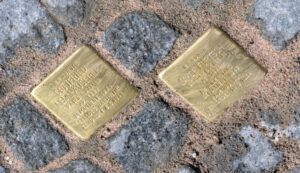