Günther ERLBECK was born in Mürzzuschlag, Styria on July 25, 1895 [it was then part of Austria-Hungary, now it is in Austria].

He was a divorced sales clerk and lived in Salzburg during the Nazi regime. He was arrested on December 13, 1941 (probably because of a denunciation) and according to the records of the Salzburg Provincial Court he was sentenced to six months imprisonment for homosexuality on January 23, 1942.1

After he served his sentence, the 47 year old Günther ERLBECK was sent to the Flossenbürg Concentration Camp on July 20, 1942.

There he was registered as a homosexual and then murdered on July 28, 1942 after his first week in the camp – »shot through the major arteries of the neck while attempting to escape – died of internal bleeding.«

His death in the Flossenbürg Concentration Camp is noted in the police registration files of the City of Salzburg.

1 Under the Nazi regime the Salzburg Provincial Court saw proceedings against 338 people, including six women, under § 129 I b of the still valid Austrian Criminal Code – »fornication against nature with persons of the same sex.« The relevant court records have since been destroyed. 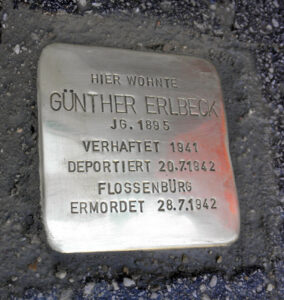 All stumbling stones at Franz-Josef-Straße 14