Victor Mordechai GOLDSCHMIDT was born in Mainz Germany on February 10, 1853. He was the fifth of the seven children of the Jewish couple Josephine Edle von Portheim and Salomon Benedikt GOLDSCHMIDT. Victor converted to Protestantism and married his cousin (Lola), who had been born in Prague on February 17, 1863 and had been baptized as a Roman Catholic. Leontine was the daughter of Rosalie and [Sir] Eduard von Portheim. Victor and Leontine GOLDSCHMIDT’s marriage didn’t produce any children.

Victor GOLDSCHMIDT studied metallurgical engineering and habilitated [got a degree beyond the doctorate which made the holder eligible to be a chaired full professor] at the University of Heidelberg with research on crystals. He was a mineralogist, crystallographer, collector and patron, honorary professor at the University of Heidelberg, internationally recognized scientific researcher, and a Freemason. Dr. Victor and Leontine GOLDSCHMIDT lived and worked in Heidelberg and in 1919 they established a foundation to promote science and art that was named after his mother Josephine von Portheim and her father Eduard von Portheim. The GOLDSCHMIDTs bought a palace in Heidelberg for the Portheim-Stiftung and its associated Museum of Ethnology that held the ethnographic collections of the couple.

By the 1920s the GOLDSCHMIDTs must have realized that their life’s work was threatened by the growing Antisemitism in Germany. The end approached when Adolf Hitler became Chancellor on January 30, 1933 and Dr. Goldschmidt was dismissed from the University of Heidelberg. Dr. Victor GOLDSCHMIDT wasn’t well and deciding that he didn’t want to spend his 80th birthday in the poisonous atmosphere of Nazi Germany the couple left Germany, at least for a while. To escape persecution German artists and writers began to leave Germany for exile already in 1933, including Bruno Frank and Alexander Moritz Frey who had found refuge in Salzburg.

Dr. Victor and Leontine GOLDSCHMIDT hoped he would recover outside Germany’s borders and traveled to Salzburg in early February 1933. They took up residence in the modest Hotel Salzburgerhof at 18 Paris-Lodron-Straße. We don’t know if the two guests from Heidelberg experienced any Antisemitic hostility in the city of Mozart. We do know that the 80 year old Dr. Victor GOLDSCHMIDT suffered from stomach problems, became severely ill in Salzburg and died here from a perforated ulcer on May 8, 1933. His wife, who had stayed with him to the end, took his body back to Heidelberg to be cremated and had his urn placed in the Heidelberg Mountain Cemetery.

The widow stayed in Heidelberg and endured harassment and humiliation there from the Nazis. Faced with imminent deportation to a concentration camp, the 79 year old lady committed suicide on August 25, 1942. In October 2010 a Stumbling Block was been set for Leontine GOLDSCHMIDT in front of her Heidelberg residence. In March 2012 a Stumbling Block was laid in Salzburg for Dr. Victor and Leontine GOLDSCHMIDT’s nephew Dr. Eduard PORTHEIM who had been taken from Salzburg to Dachau and other concentration camps before being murdered in the Hartheim killing center outside Linz Austria. 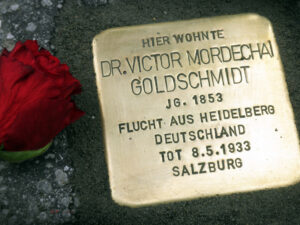 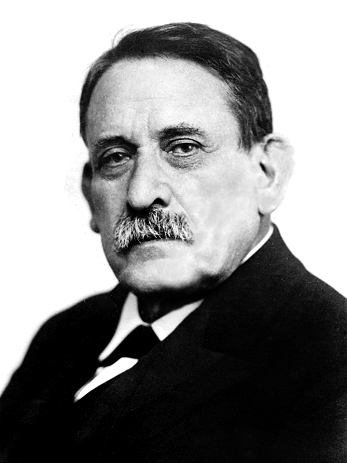 All stumbling stones at Paris-Lodron-Straße 18