Johann BRUCKMOSER was born in St. Georgen bei Salzburg (about 25km north of the city) on June 17, 1906. He was the Catholic son of a farmer and worked at first on his parents’ farm. Then he was a soldier in the Austrian army for six years before becoming a guard. During the Austrian dictatorship of the 1930s he was a member of the Austro-fascist government’s »Fatherland Front« and its »Homeland Security« militia, both of which were dissolved by the Nazis when they took power.

After the annexation of Austria by Nazi Germany he began to work for the German National Railroad in July 1938. His last job was as a train conductor. In June 1940 he got married and he and his wife lived in the Maxglan neighborhood.

Documents indicate that in 1940 the two railroaders, Johann BRUCKMOSER and Karl STEINOCHER fell under suspicion of having made statements critical of the Nazi regime, but the criminal proceedings were discontinued. At the beginning of 1941 the engine driver Maximilian Hager recruited them for the illegal Austrian Communist Party (KPÖ). They belonged to the »transport group« led by the railroad conductor Franz ASCHENBERGER and until the end of the year they paid monthly dues of 1 Reichsmark and got Communist publications to read.

At the start of 1942 the Gestapo managed to insert an undercover spy named Josef Kirschner (from the Maxglan neighborhood) into the resistance networks of the Communists and Socialists – and that enabled them to roll up and smash the networks. As a result, at least 79 activists were killed in concentration camps or prisons, including 29 railroaders from the city and state sections of the two resistance organizations.

On February 25, 1942 the Gestapo arrested Johann BRUCKMOSER. He was moved from the Salzburg State Court jail to the prison in Landsberg am Lech before he was brought back to Salzburg for trial. In the five trials that the Vienna Superior Court held in Salzburg between November 23 and November 27, 1942 30 activists from the illegal KPÖ, all railroaders, were sentenced to 212 years imprisonment for »conspiracy to commit treason«.

Two of the 30, Josef KUMHART and Karl STEINOCHER failed to survive their mistreatment while in Nazi custody. Four others, Franz BROŽ, Johann Bruckmoser, Ignaz GRABLER and Lorenz KÜNSTEL, died from their injuries after the liberation of Austria.

Johann Bruckmoser had been sentenced to eight years imprisonment on November 27, 1942 and in January 1943 he was sent to a prison in Straubing Bavaria. In July 1943 he was drafted out of prison into the German army Penal Division 999, usually referred to as a »punishment battalion«. He was one of many prisoners who had been declared »unworthy to bear arms«, including many prisoners in penitentiaries who had been condemned to lose their citizenship rights.

These opponents of the regime who had been declared »unworthy to bear arms« were now declared »worthy« for the duration of the war and given »probation at the front«. The army used its barracks in Heuberg bei Ulm to organize »probation unit« Penal Division 999.

On July 28, 1943 Johann Bruckmoser was assigned to the XIIIth Garrison-Infantry Battalion belonging to the 999th Division in Heuberg. On November 25, 1943 the XIIth was ordered to the »South Front« in occupied Greece where they were stationed on the island of Samos in the Dodecanese Islands near the coast of Turkey. BRUCKMOSER deserted on September 24, 1944 before his unit was to be transferred to Leros.

He wanted to join the Greek partisans but was taken prisoner by British troops and was interned as a prisoner of war in Camp 380 on the Suez Canal. In December 1946 the British military transported a group of POWs to Austria for release, including Josef RIEDHERR from Maxglan and the seriously ill Johann Bruckmoser. Bruckmoser was suffering from tuberculosis and died in the Salzburg State Hospital on June 15, 1948 at age 41.

As his survivor, his widow Therese was eligible for victims’ compensation in liberated Austria. She died at age 79 in Salzburg. 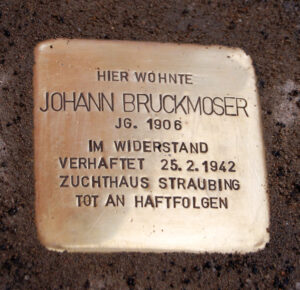 All stumbling stones at Gärtnerstraße 33