Hedwig SCHAFFGOTSCH neé Vetter (Hede SCHAFFGOTSCH-NILSON) was born in Altona Germany on November 25, 1889. She was the younger of the two children of Sophie Vetter neé Schlomingk and Christian Vetter.

Hedwig’s mother was Jewish, but had converted to Lutheranism when she married, so Hedwig was baptized in the Protestant Church. Sophie Vetter died in Hamburg in May 1938.

Hedwig’s first husband, Einar Nilson, was Max REINHARDT’s house composer and musical director in Berlin and Salzburg. Among other things Nilson composed the music for the Jedermann productions in front of the Salzburg Cathedral.

While Nilson’s work on Jedermann is well known, it’s less well known that his wife Hedwig rehearsed the dances for the productions from 1920 to 1937. Her name is therefore also listed in the »Leading Team« for these Jedermann performances.

The artistic couple had a son: Nils Christian, who was born in Berlin in 1918. When his parents divorced he stayed with his mother.

In December 1926 Hedwig married the thirteen years younger Franz Gotthard SCHAFFGOTSCH in the Salzburg Cathedral, SCHAFFGOTSCH was the scion of an aristocratic family and was a philosopher, draftsman, illustrator and stage designer.

During the Austrian dictatorship from 1933 to 1938 Hedwig and Franz SCHAFFGOTSCH were politically active – in the service of the regime. Franz served as a »State Youth Leader« and Hedwig arranged patriotic celebrations and festivals for the »Young Fatherland« youth group – that was affiliated with the fascist Heimwehr militia and which joined with some other youth groups to form an Austrian equivalent of Germany’s Hitler Youth in 1936.

When Austria was taken over by the Nazis in March 1938 the SCHAFFGOTSCHs were on an Italian vacation trip to Italy and had every reason not to return to Nazi ruled Salzburg.

Pessimistic reports from their family in Salzburg led the SCHAFFGOTSCHs to embark on an uncomfortable search for safety that took them to various Italian and Yugoslavian locations.

The SCHAFFGOTSCHs were arrested by the Ustasha police on the island of Sipan just off the coast from Dubrovnik in September 1942, probably at the instigation of the Gestapo, and were turned over to Italian occupation forces in Dubrovnik where they were interned.

Franz SCHAFFGOTSCH came down with typhus in the internment camp and died there at age 40 on December 21, 1942.

Hedwig SCHAFFGOTSCH survived the terror years working as a hospital aide in Yugoslavia and Italy. She ended up in Turin where she experienced the liberation and was reunited after eight years with her son Nils C. Nilson to the joyful surprise of them both – Nils had emigrated as a ship steward to the US and returned as an American soldier to help liberate Europe.

In 1949, as Countess Hedwig SCHAFFGOTSCH, she published her memoirs of her years on the run titled Die Liebenden sind alle von einer Nation – Ein Frauenschicksal [The Lovers are all from One Country – a Woman’s fate].

The book ended with a visit to liberated Salzburg where she found no home and no friends who were still dear to her: »so then I had to completely give up on Salzburg as a homeland.«

After 1945 Hedwig lived in Munich, as did her U.S. citizen son Nils C. Nilson.

On February 17, 1977 Hedwig (Hede) SCHAFFGOTSCH (born Vetter and with the married name Nilson before her divorce and remarriage) died in Munich at age 87. 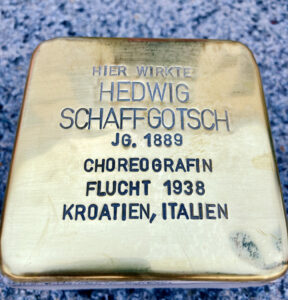