Aloisia Wolf was born in Graz on January 3, 1930. She was the fourth of ten children of Albert Wolf and his wife Theresia (née Leimberger) and was baptized Roman-Catholic. Albert was an umbrella maker and musician who moved his family to Salzburg in October 1936 where they lived in a caravan. Four of their ten children were born in Salzburg: Albin, Marianne and the two youngest, the twins Hans and Grete who were born on September 4, 1940. Albert Wolf had a permanent job as a road maintenance worker for the city under the Nazi regime, but the police registration files reported that since February 28, 1940 he and his family had lived in number 22 of the city’s »temporary quarters«. These were wooden barracks built for homeless families along the Kräutlerweg, on the left bank of the Glan canal (in the Maxglan district of the city).

Not far away from the Kräutlerweg, but on the other side of the Glan near the Schwarzgrabenweg in the Leopoldskron-Moos district, the Nazis built a »Gypsy camp«, a concentration camp where more than 200 Sinti were interned after September 1940. Among them were members of the Leimberger-Lichtenberger extended family who were relatives of Theresia Leimberger Wolf. In April 1943 most of the Sinti families were deported to Auschwitz-Birkenau. The criminal police responsible for the action reported:

[…] The Gau Salzburg is thereby, with the exception of a few remaining Gypsies, now Gypsy free. The remaining Gypsies (about 20) are members of Gypsy families that have been living in the capital or other locations in Gau Salzburg for many years and have assimilated socially, some of them are married to persons of German blood. The Reich Security Main Office foresees further special measures regarding these remaining gypsies.
i. A. (Huber) SS-Obersturmführer [first lieutenant] and Criminal investigator

So the »settled« and »socially assimilated« families who were listed in the criminal police’s »Gypsy register« were also under threat. Some, like the Rechberger family who were interned in the summer of 1940, first in the temporary camp on the Trabrennplatz in Parsch and then in the »Gypsy camp« in Leopoldskron-Moos, survived the Porajmos, the Gypsy Holocaust. The Rechbergers were freed because the family father was considered a »pure blooded German«. But not all of the Wolf family survived.

The asthmatic 39 year old Albert Wolf died in the Salzburg State Hospital on July 18, 1943 and that left his widow and ten minor children in acute danger. Theresia Wolf’s fourth child Aloisia, was placed temporarily in a Vienna institution and then deported to Auschwitz-Birkenau Section B II e (»the Gypsy family camp«) where she was registered as number Z-10628 on May 10, 1944. Aloisia was just 14 when she died (presumably sent to the gas chambers shortly after her arrival).

For a while after the liberation, Aloisia Wolf’s mother Theresia continued to live at »temporary quarters« number 22 with her surviving nine children and she provided a refuge for a few concentration camp survivors – Ursula Leimberger, Magdalena Kerndlbacher and Johann Krems. Frau Wolf’s 12 year old daughter Christine died in an accident in 1947. Seven children left Salzburg in the 1950s and on September 4, 1966 the 64 year old Frau Wolf was killed in an accident on the autobahn. 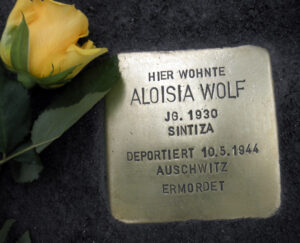 All stumbling stones at Kräutlerweg