Katharina (Käthe) FLEISCHER was born in Salzburg on December 13, 1878. She was the second of the four children of the Jewish couple Henriette (Netty) Lederer, née Kohn, and Alexander Lederer who had come from the Jewish community of Lackenbach — one of the »Seven [Jewish]Communities« of the Austrian-Hungarian border region. The Lederers were one of the Jewish families that moved here at the initiative of Albert Pollak who had been the first member of Salzburg’s most recent Jewish community in the 19th century. The Lederers had lived earlier in Salzburg’s Old City, but their last dwelling was in the New City at 27 Faberstraße and three of their children were born in Salzburg. Master tailor Alexander Lederer died in 1911 and his widow Netty followed in 1922. The grave of the two Lederers is in the Jewish section of the Vienna Central Cemetery.

Their sons Heinrich and Max continued to live in Salzburg. The older son ran a commercial agency while the younger was a chemical engineer. In 1910 their then 29 year old younger sister Käthe married a Hungarian Jew named Gustav Rakos (who had changed his name from Rosenzweig) in Neudörfl an der Leitha, just outside of the city of Wiener Neustadt in Lower Austria and nearly on the border with Hungary. The couple had a son, Alexander Rakos, who was born on September 27, 1912 and was registered with the Jewish Community Organization in Vienna. Käthe’s 36 year old husband died in 1915 and was buried in Wiener Neustadt’s Jewish cemetery. In 1920 Käthe married a 65 year old widower named Isidor FLEISCHER, and he died in Vienna in 1926. There were no children from this second marriage. Käthe’s son Alexander Rakos became a dental technician in Vienna. In the 1930s the twice widowed Käthe FLEISCHER mainly lived in Salzburg, with her older brother Heinrich Lederer, on the third floor of 27 Faberstraße.

Research has determined that Käthe’s younger brother Max Lederer was able to escape with his wife to England in March 1938. Her older brother Heinrich Lederer and his wife Rosa were expelled from Salzburg in November 1938 despite their having local citizenship rights here. Unable to escape the enlarged Nazi Germany, Heinrich and Rosa Lederer were living in a »collection house« for Jews in Vienna’s Leopoldstadt district in September 1942 – generally the last address for Jews before their deportation. Heinrich and Rosa were among the very few who managed to escape deportation and both survived the terror years in Vienna.

Käthe FLEISCHER and her son Alexander were last quartered in a »collection house« at 5 Hafnergasse in Vienna’s Leopoldstadt. But unlike her brother and sister-in-law they were unable to find a way to survive. The 63 year old mother and her 29 year old son were numbers 802 and 803 on Transport 26 that left Vienna on June 9, 1942 with 1,006 victims en route to the killing center of Maly Trostinec — just outside the city of Minsk in German occupied White Russia. On June 15 Käthe FLEISCHER and her son Alexander were murdered there.

Käthe’s younger brother Max died in London in 1959 in London and her older brother Heinrich died in Vienna in 1961. Heinrich was buried in the plot of his parents Alexander and Netty Lederer. 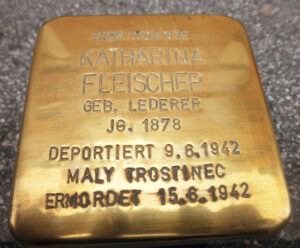 All stumbling stones at Faberstraße 27