Daniel BONYHADI was born in Loipersdorf on the Schütt [Csütörtök or Stvrtok na Ostrove], in what was then the district [Komitat] of Pressburg [Pozsony or Bratislava] in the Austrian Empire’s Kingdom of Hungary, on December 23, 1863.

He was the second son of the Jewish couple Netti Adelheid [or Adel, or Edel] BONYHADI, née Perl, and Moses Moritz BONYHADI. Netti and Moses had eleven children, six of whom died in childhood from diptheria. Two of the BONYHADI’s sons lived in Austria from the 1880s on: Salomon, the older of the two, lived in Bruck an der Mur and Graz; while Daniel lived first in Klagenfurt and then in Salzburg. In the end, both brothers died in the Leopoldstadt district of Vienna where they had been forced to move by the Nazis.

Daniel BONYHADI married the Jewish Klothilde Kronberger, who had been born in Upper Austrian St. Pölten, but who was living in the town of Klagenfurt in Carinthia.

A year later the widower Daniel BONYHADI moved to Salzburg with his four sons. In Oktober 1898 Daniel BONYHADI married Sarah Gross, a Jewish woman who had been born in Strasburg, in what was then West Prussia [now Poland] in 1864. They got married in Neudörfl, which was then in Hungary but is now in the Austrian province of Burgenland.

Their three sons were all born in Salzburg: Ludwig on November 30, 1899; Ernst on December 14, 1901; and Erwin on May 8, 1906. In these years Sarah’s mother Rosalie Gross, a teacher’s widow from West Prussia, also lived with the family in Salzburg – though in the end she moved to Vienna where she died in October 1912. Her grave can be found in the Jewish section of Vienna’s Central Cemetery.

The BONYHADI family became legal Salzburg residents in accord with the Austrian Heimatrecht law in 1910 and were well established in Salzburg. They lived on the 1st floor in the »Faber House« at 4 Rainerstraße in the upper middle-class Andrä-Quarter.

Daniel had started off selling shoemakers’ supplies, but switched to being an insurance investigator and finally had his own insurance agency which was the chief Salzburg representative for the Viktoria zu Berlin insurance company. In addition he was head of the Chewra Kadischa Jewish sickness and burial association and a board member of the official communal organization for Salzburg’s Jews, the Israelitischen Kultusgemeinde.

His wife Sarah was the leader of several Jewish women’s organizations and was nicknamed »the president« because of her prominent role. On May 7, 1931 Daniel was widowed for a second time when Sarah died in Salzburg – she is the only family member whose grave can be found in the Jewish cemetery in Salzburg-Aigen.

In the meantime Daniel BONYHADI’s sons Edgar, Arthur, Oskar, Ludwig and Erwin had left their parents’ house. Arthur lived in Linz and was a baker before he opened his own commission agency. Oskar was a tailor in Budapest. Erwin, who studied and then practiced various trades, married the Galicia born (1908) Helena Goldberg in Zürich. Edgar remained single and was a bank clerk in Vienna until he »retired« in 1936 (he was probably laid off in the economic crisis) and returned to Salzburg.

A similar fate befell his brother Ludwig, who was an insurance clerk in Vienna and who married a Jewish milliner from Vienna named Gertrude Löwit who had been born on January 26 1906. Their daughter Ruth was born in Vienna on June 18, 1928. Ludwig BONYHADI’s family had their legal residence in Salzburg where he had been born and from October 1934 on they were registered as living at 4 Rainerstraße, where Ludwig’s widowed father and grandfather lived.

The half-brothers Ernst and Manfred BONYHADI lived uninterruptedly in Salzburg until 1938. Ernst, who graduated from the academic high school in Salzburg and was an unmarried bookkeeper, had his last residence on the Judengasse.

What is known is that was able to flee to England where he was a member of the exiles’ Austrian Centre and its popular Swiss Cottage theater troupe before his death in London in 1944.

Manfred and Isidor had a haberdashery called Fuchs & Co., which was first located nearby at 6 Mirabel Place and later relocated to the 1st floor of 21 Getreidegasse in the center of Salzburg’s Altstadt shopping district.

Isidor was the son of Ludwig and Julia Schönbrunn Fuchs (whose half-sister Johanna was married to the prominent coal and fuel dealer and leader of the Salzburg Jewish Community Rudolf Löwy) and his sister Amalie was married to Oswald Löwy who also had a shop at 6 Mirabel Place.

The Jewish businessmen in Salzburg were a close knit group who often had interlocking family ties.

Manfred BONYHADI’s family lived on the 1st floor of the »Heller House« at 8 Franz Josef-Straße, in the solidly middle-class Andrä-Quarter.1 Isidor Fuchs and his family were forced by the Nazis to move out of their apartment on the 1st floor of 1 Elisabethstraße in May 1938 [it was turned over to a Salzburg medical doctor] and they moved in with Manfred and Else BONYHADI. The brothers-in-law Isidor and Manfred were arrested in the so-called »Reichskristallnacht« pogrom of November 9-10, 1938 and were sent to the Dachau concentration camp – where they were held and mistreated until they signed an agreement promising to give up their properties and leave the country.

Their lovely apartment in the Andrä-Quarter was given over to a provincial clerk whose wife was the head of the Nazi District Women’s Association. The two Jewish families were expelled to Vienna, but managed to get passage on the Italian SS Saturnia and arrived in New York on November 17, 1939.

Not all of the members of the two extended families managed the escape to the free world (for the Fuchs family, see the Stolperstein entry for 12 Franz Josef-Straße: Amalie LÖWY).

Daniel BONYHADI, who had lived in Salzburg for 42 years and who was ill with cancer, had already been expelled from Salzburg at the begining of June 1938. The beneficiaries of the expulsion of the Jewish families from the »Faber House« 4 Rainerstrasse included the Nazis’ German Labor Front, the local organization of the Nazi Party, the local Nazi Women’s Association, and the supervisor of the provincial psychiatric institute [which was later involved in the Nazi campaign to murder chronic mental patients].

Salomon’s wife Bertha and their 49 year old son Dr. Norbert BONYHADI, who had been a doctor in Upper Austrian Traun, died there on March 6 and April 30, 1940 respectively. Norbert’s widow, Alice, and their 10 year old son Gerald were deported to Maly Trostinec near Minsk in the occupied Soviet Union on May 20, 1942 and were murdered there on May 26, 1942.

Salomon’s other son, the 45 year old Berthold BONYHADI, was murdered in Lodz with his wife Elisabeth. Daniel and Salomon BONYHADI’s sister Rosa (Reitzel) and her husband Ignaz (Yitzhak) Kalisch lived in Galanta near Bratislava before they were murdered in Auschwitz (see the memorial pages in the Yad Vashem Shoah data bank).

Daniel BONYHADIS oldest son, the 54 year old Edgar2, had his last residence in the Vienna Leopoldstadt like his father and uncle. He was deported to Maly Trostinec in the occupied Soviet Union with the widow and son of his cousin Dr. Norbert BONYHADI on May 20, 1942, and like them he was murdered there on May 26, 1942.

Altogether fourteen Salzburg Jews are known to have been murdered at the Maly Trostinec execution site.

On October 20, 1939, sixteen days before his father’s death, Daniel BONYHADI’s 41 year old son Ludwig (who last lived in Vienna’s 2nd district) was shipped out on the first transport of 912 Jews to Nisko near the German-Soviet demarcation line in jointly occupied Poland, where he was murdered.

This transport also included Eduard Steindler, who was married to Else Weinstein from Salzburg.

Ludwig’s 35 year old widow Gertrude BONYHADI and their 13 year old daughter Ruth were sent to Lodz on Oktober 15, 1941, and then to Bergen-Belsen on August 23, 1944 – where they were freed by British troops on April 15, 1945. Around 13,000 of the freed inmates died in the next few weeks from the diseases they had acquired in the camp–including Gertrude, who died on May 1, 1945.

The 16 year old Ruth survived this danger too. She learned later that her 64 year old grandmother, Ottilie Löwit, née Gans, who had last lived at Aegidigasse 5/ in Vienna’s 6th district, had been deported to Riga on December 3, 1941 and had been murdered there [the Shoah Data banks fail to include the birth data for Ottilie Löwits who was born in Deutsch Beneschau, Bohemia on April 19, 1877].

Alexander Löwit, Ruth’s grandfather died in Vienna on April 2, 1939 and was buried in the Jewish section of Vienna’s Central Cemetery (I/52/37a/47).

Ruth BONYHADI emigrated to the USA in May 1946. There she married Herbert J. Rubel, who had escaped from Germany in 1938, and had three daughters, Joan Gertrude Rubel, Miriam Susan Rubel Davidow and Dr. Nancy Louise Rubel. Ruth died in Richmond, Virginia on October 11, 2001.

1 Manfred Bonyhadi’s family occupied the apartment of a Jewish family named Popper, who moved to Linz in 1926. Wilhelm Popper was also a board member of the Jewish Communal Organization and he died in Linz in 1932. His widow Olga Popper, née Katz, was murdered in Maly Trostinec in September 1942. Their son Herbert, who had been born in Salzburg on October 26, 1909 was condemned to death by a Nazi special tribunal and was executed in Vienna on November 10, 1942.

2 According to Ernest Bonyhadi’s (1924 – 2016) information his uncle Edgar was married to Melanie, but so far no record of any civil or religious marriage has been found and the Vienna City and state Archive reported on December 7, 2011 that Edgar Bonyhadi was still single at the time of his deportation. That doesn’t exclude the possibility that he had a life partner who was also a Shoah victim, as Ernest Bonyhadi says. 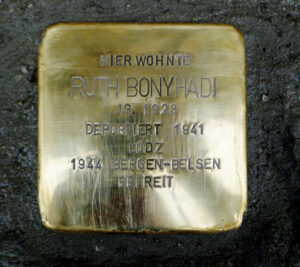 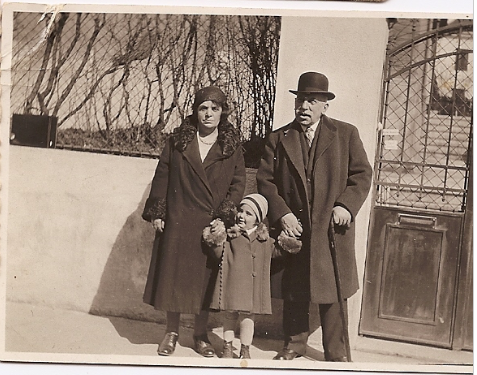 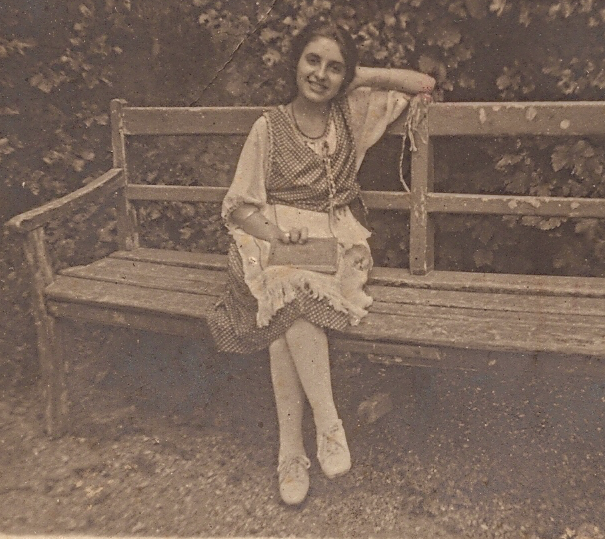