Eduard BIGLER was born in the Upper Austrian city of Wels on March 15, 1868. He was the son of the Jewish couple David and Rosa BIGLER, but in 1894 he converted to Calvinist Protestantism in Vienna. He was a merchant and served as Argentina’s Vice-Consul in Salzburg. From 1921 to 1938 he lived at 2 Bürglsteinstrasse in Salzburg’s Äußerer Stein neighborhood. In 1921 he also got married in the Evangelical Christian Church in Salzburg which served both Lutherans and Calvinists. His bride was Jolanda Goldberger a Lutheran convert who had been born Jewish in Magyar-Szölgyen, Komitat Gran (Esztergom) Hungary on September 14, 1893.

In 1922 Eduard BIGLER acquired a villa at 18 Schwarzenberg-Promenade (later renumbered as Nr. 60) in Aigen, an upper class suburb of Salzburg until it was annexed to the city in 1939. He rented the 1st floor to the family of a civil servant named Dr. Friedrich Hoch. On March 21, 1938, right after Austria’s annexation to Nazi Germany, Eduard and Jolanda BIGLER had to move out of their apartment and office in the Bürglsteinstraße because they were considered to be Jewih under the Nazi’s racist Nuremberg Laws. They moved to the ground floor of their villa in Aigen where they had an apartment and an office. The Hoch family still lived on the 1st floor, but under the Nazi regime the relationship between owner and renter changed drastically.

Eduard BIGLER immediately ran into political trouble over his ownership of the house, one that is easy to see from the land register (# 35), the C-page of which shows a lien of 5,000 Marks placed on the property by the finance ministry in accordance with the Jewish Capital tax placed on all Jewish owned properties. BIGLER was being forced to sell his villa and a contract was approved by the Nazi’s governor’s office on July 9, 1940: an »Aryanization« »based on the Regulation on the Utilization of Jewish Property«. The new owners1 gave the BIGLERs the right to stay in their apartment after the sale, which partially explains the low sale price. The BIGLERs thought they were protected from further persecution because they were given Argentine citizenship in 1939 and Argentina maintained good relations with Germany until the beginning of 1944.

Eduard BIGLER was now just a renter in his »Aryanized« villa and his former tenant Dr. Friedrich Hoch became the director of Section B of the State Nutrition Office under the Nazi regime. In his official capacity Hoch denounced »the Jews« to the Gestapo. Dr. Hoch’s December 1942 denunciation to the Gestapo reads as follows:

On January 28, 1944, two days after the rupture of diplomatic relations between Argentina and Germany, the BIGLERs were arrested. The next day they were deported to the Bergen-Belsen concentration camp’s special section for foreign Jews. Seventy-six year old Eduard BIGLER was murdered there on June 4. 1944. His younger brothers Alfred and Leopold, who had lived in Salzburg for a while, were murdered in Riga and Theresienstadt respectively. The grave of their parents is in the Jewish cemetery in Linz, the nearest Jewish cemetery to their home in Wels.

Eduard BIGLER’s widow Jolanda lived to experience the liberation of the Bergen-Belsen concentration camp on April 15, 1945 and returned to Salzburg. She fought to the end for justice and her claims were supported by the U. S. Civil Affairs Court for Criminal Matters: complaint against the denouncer Dr. Hoch, request for the restoration of their villa at 60 Schwarzenberg-Promenade, request for victim’s assistance and compensation for imprisonment (in most post-war documents the widow’s family name is given as »de Biegler«, presumably because of her Argentine citizenship).

On January 25, 1949 the People’s Court in Linz, acting »in the name of the Republic« of Austria, found Dr. Friedrich Hoch not guilty of the crime of attempted denunciation pursuant to Article § 8 of the Penal Code and Section 7/1 of the War Crimes Act – not least thanks to the intervention of the then governor of the State of Salzburg Josef Rehrl on behalf of his brother-in-law Dr. Hoch, who retained his position as a State official.1

Mrs. BIGLER’s request for the restitution of the villa was rejected on the ground that the expropriation was not carried out on political grounds. At the request of the Salzburg Public Prosecutor on 16 April 1953 Jolanda BIGLER was declared partially legally incapable on the grounds of alleged »Querulantenwahn« (trouble-maker mania) – which meant that her objections and further applications for restitution were disallowed (in 1960 the villa at 60 Schwarzenberg-Promenade was sold and is no longer owned by the »aryanizers«).

Mrs. BIGLER’s application for victim’s assistance was turned down by the Salzburg State on the grounds that she wasn’t an Austrian citizen and therefore wasn’t eligible. In 1959 the Federal Ministry for Social Affairs granted her request for compensation for her imprisonment, but for such a small amount that she had to file a further request –which was only granted in 1962.

Thanks to the research of our »Schwejkologen« Jomar Hønsi in Oslo we learned in 2013 that Eduard BIGLER had a son with his Berlin born first wife when they were living in Dresden in the 1890s. This son had been born on December 25, 1894 and had been baptized as Hans Hermann Gustav Biegler (according to the baptismal certificate) in the Dresden-Blasewitz Protestant parish. Hans Biegler served in the Austro-Hungarian army in the First World War, and in the same infantry regiment as the Czech writer Jaroslav Hašek who became world famous for his anti-military satirical novel The Good Soldier Schweik and it is now clear that Jaroslav Hašek modeled the book’s character »Cadet Biegler« on Eduard BIGLER’s son Hans. Hans Biegler survived the Nazi terror years and lived in Dresden after the liberation. In 1955 he identified himself as the model for his war comrade Jaroslav Hašek’s caricature: »Cadet Biegler from the Schweik Reports« (Vienna Volksstimme, February 9, 1955). Hans Biegler died in Dresden on October 13, 1962 (when it was part of the German Democratic Republic, GDR).

1 The proper ownership of the villa at 60 Schwarzenberg-Promenade in Salzburg-Aigen after its forced sale is not easy to figure out: Ida Embacher, who had a two-thirds share of the ownership at first, was the daughter of Hermine Pretsch, née Embacher, who ran a couple of bordellos in Salzburg’s Herrengasse and Steingasse. Mother and daughter, who owned the villa outright at the end, sold it in 1960.

2 Dr. Hoch’s first wife Marietta Spravka Hoch, the mother of two sons, had been a patient in the Salzburg State Asylum since September 1935. Divorced from Dr. Hoch she was deported to the Hartheim killing center on April 16, 1941 where she was gassed. Her older son was killed near the start of WWII. Dr. Hoch remarried in 1939 and became the brother-in-law of Josef Rehrl. Dr. Hoch ended as a retired councilor and died in Salzburg in 1970. His brother-in-law Josef Rehrl was the governor of Salzburg State from 1947 to 1949. 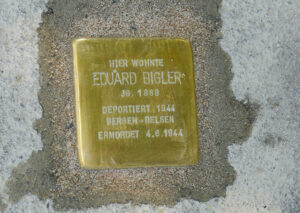 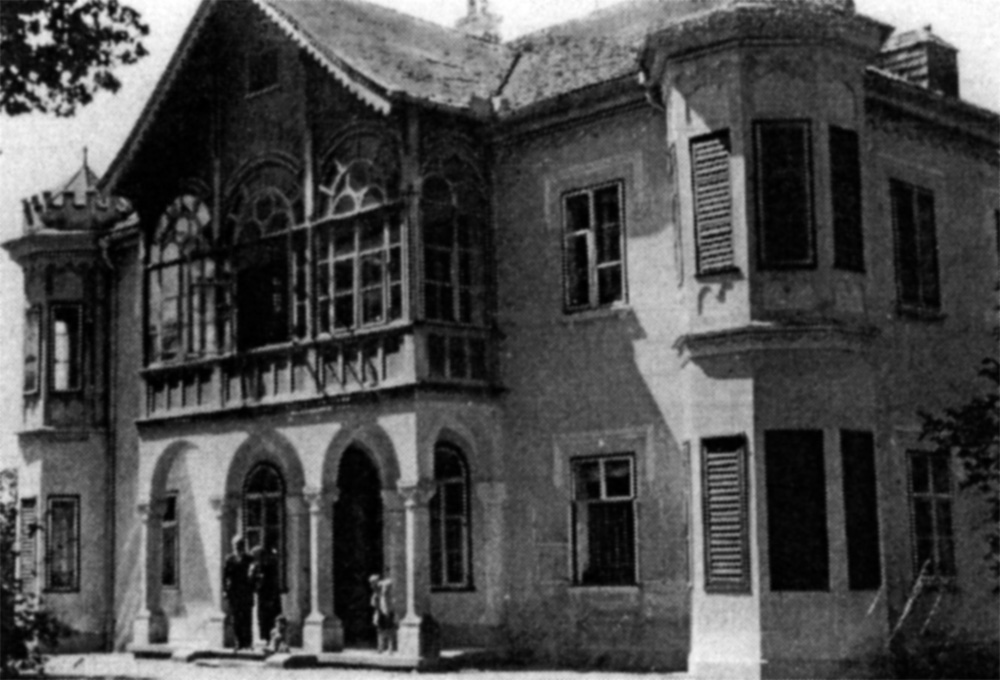 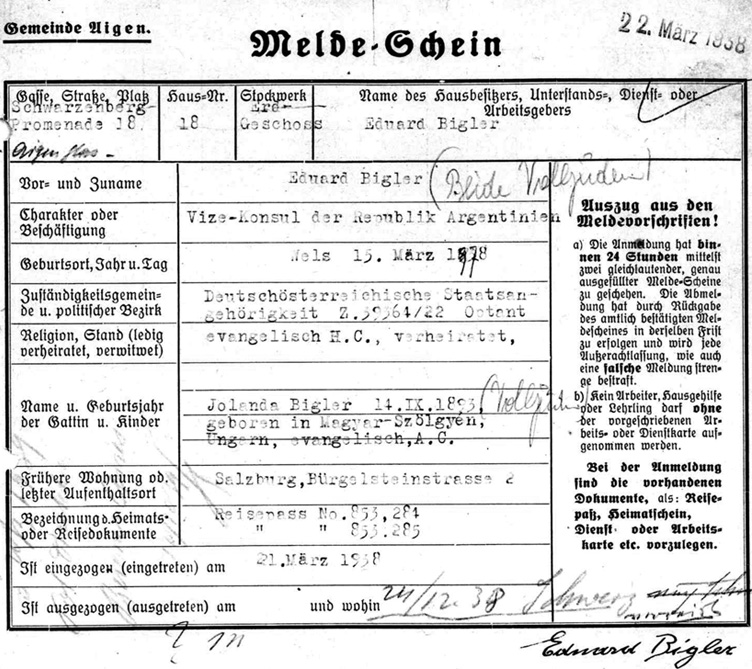 All stumbling stones at Schwarzenbergpromenade 60