Maria SCHEURINGER, née Königsdorfer, was born in Hallwang (about 6.5 km north of Salzburg) on June 24, 1888. She was the Catholic wife of a railroader and had a daughter. Along with many other railroaders the SCHEURINGER family lived in Itzling, which was part of Gnigle until they were both annexed to the city of Salzburg in 1935, and they had local citizenship rights there.

On September 21, 1936 Maria SCHEURINGER was admitted as a patient in the Schloss Schernberg sanatorium maintained by the Merciful Sisters of St. Vincent de Paul in Schwarzach (in the Pongau region of Salzburg). Despite the »most courageous protest of the Church in Salzburg« (Ernst Hanisch) Schloss Schernberg was targeted by the Nazi regime’s »Euthenasia« program along with the Salzburg State Asylum.

The 52 year old Maria SCHEURINGER was one of the 115 patients who were deported from Schloss Schernberg to the Hartheim Castle killing center near Linz on April 21, 1941—where they were all murdered. As with all the other victims of the Nazis’ secret »T4«1 program, Maria SCHEURINGER’s death was not recorded in the Salzburg police registration files.

Her widowed husband died in Salzburg in 1963 and her married daughter Josefine had three children. 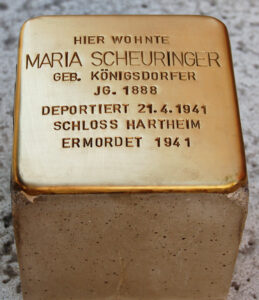 All stumbling stones at Pflanzmannstraße 6