Rafael GOMEZ-RODRIGUEZ was born in Guadix, Provinz Granada, Spain on September 24, 1918. He was one of about 7,000 Spaniards who had fought for democracy and freedom in defense of the Republic in the Spanish Civil War of 1936 to 1939, who fled to France after the Republican forces were overwhelmed by those of General Franco and his German and Italian allies, and were then interned in France before the German conquest of France allowed the Nazis to ship them off to the Mauthausen concentration camp.

The prisoner cards of the »SS Main Economic and Administrative Office« [the SS organization responsible for managing the finances, supply systems and business projects for the SS which also ran the concentration camps and was instrumental in the implementation of the Final Solution] show that 40 of these Spanish Republicans were held in the police jail on the Rudolfsplatz (which was called Georg-von-Schonerer-Platz under the Nazi regime), before they were deported by the Salzburg Gestapo Salzburg to Mauthausen on September 11, 1941. There they were registered as »Spanish Reds«, and Rafael GOMEZ-RODRIGUEZ was prisoner number 4957. On February 1, 1942 he was 23 years old when he was murdered in the Mauthausen-Gusen branch camp.

At least 21 of the 40 Spaniards deported from Salzburg to Mauthausen were killed, either there or in one of its branch camps – mostly in Gusen:

These 22 Spaniards whose names are now known are some of the Gestapo victims whose names were never entered in the Salzburg police registration files and were not included in the book Widerstand und Verfolgung in Salzburg 1934-1945 [Resistance and Persecution in Salzburg, 1934-1945] published in 1991. 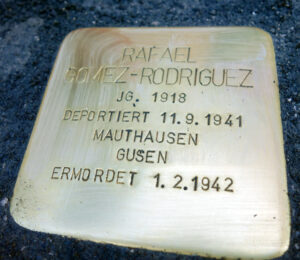