Rudolf DULLINGER was born in Salzburg on May 14, 1884 and was baptized Catholic. He was a hairdresser and married a German woman from North Rhine-Westphalia.

The couple had four children, the last of whom was born in Salzburg in 1918. The family had local citizenship rights in Salzburg and they last lived together at 27 Römergasse (called the Jaidinger-Villa) in the Maxglan neighborhood.

In May 1922 Rudolf DULLINGER was admitted as a long term patient in the Salzburg State Asylum. In 1929 his wife divorced him and left Salzburg with their children. The 56 year old Rudolf DULLINGER was one of the 82 patients deported from there to the Hartheim Castle killing center near Linz on April 17, 1941 – where they were all murdered.

As with all the other victims of the Nazis’ secret »T4«1 program, Rudolf DULLINGER’s death was not recorded in the Salzburg police registration files. Nothing further is known about the fate of his children after they left Salzburg. 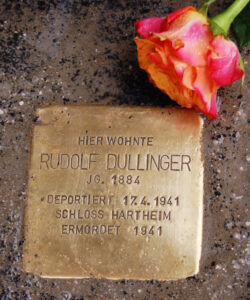 All stumbling stones at Römergasse 27