Walter HINTSCHICH was born in Leobersdorf (in Lower Austria about 40 km south of Vienna) on May 19, 1911. He was the first of the three children of Magdalena and Franz HINTSCHICH. Franz was a plumber, as were his two sons Walter and Franz. The family had local citizenship rights in the Gnigl neighborhood that was annexed to Salzburg in 1935 and they lived at 11 Ignaz-Härtl-Straße.

Franz SCHMIDHAMMER was born in Gnigl on July 21, 1916 as the third of five children of Elisabeth and Roman Schmidhammer. Roman was a fireman on the trains of the Austrian National Railway (ÖBB). Their sons Roman and Alois were also railroaders, while Karl apprenticed as a carpenter and Franz went to a trade school. The family had local citizenship rights in the Gnigl neighborhood and lived in the ÖBB-Residence Nr. 4 (27 Schillinghofstraße).

It is noteworthy that both the HINTSCHICH and Schmidhammer families belonged to the sport and youth organizations of both the Roman Catholic Church and the Social Democratic Labor Party (SDAP). Until February 1934 their home district of Gnigl had a railroader for a mayor who was also both Catholic and a Social Democrat. After the Salzburg Social Democrats gave up without a fight when their party and its associated organizations were suppressed by the Austro-fascists many younger social democrats swung to the left. They either joined the Austrian Communist Party (KPÖ) that had been banned the previous May or they turned to the Austrian Revolutionary Socialists (RSÖ) organization that emerged from the shattered social democracy in 1934. The young activists in Gnigl who were associated with both of these political movements belonged to the Workers’ Gymnastics and Sports Association so they were friends who followed the same path. They went from the gym into the resistance and jails; they fought for the Spanish Republic as volunteers in the International Brigades and, if they survived the war under »Spanish skies«, they became persecuted »Spanish Reds« imprisoned in German concentration camps or punishment battalions where they were murdered or they survived and were liberated – the consequences of February 12, 1934.

As the first anniversary of the February uprising against the dictatorship approached the Communist Party called for protests against the Austri-Fascist dictatorship. Four young Gniglers fell into the hands of the police while distributing leaflets with slogans like »Come out on February 12th and fight for the victims of the bloody regime …« The four were brought before a court in Salzburg on April 1, 1934 and charged with »disturbing the peace with seditious offences«. The 23 year old journeyman plumber Walter HINTSCHICH, who was identified as a socialist, was sentenced to fifteen months of strict detention, after which he joined the Revolutionary Socialists. An 18 year old carpenter’s helper sentenced with him to twelve months was identified as a Communist. In its ruling the Salzburg State Court noted that it was well known that »since the February revolt of 1934 a sort of convergence has taken place between the two former political parties that makes joint actions against the government by Communists and Socialists intelligible and plausible«.

In any case the call for joint action in commemoration of February 12, 1934 was certainly understandable for the court. At the beginning of 1936 the Salzburg police managed to arrest twenty members of the illegal Austrian Communist Party. Early in the summer of 1936 the police heard that it was now the Revolutionary Socialists who had growing influence and the police rolled up and smashed their organization later in the summer. During their hose searches the police found two forbidden books, one by Karl Marx and one by Lenin. Eight comrades charged with »criminal acts in contravention of sections 4 and 5 of the July 11, 1936 law for the defense of the state« faced the court on December 28, 1936. State RSÖ Leader Josef PFEFFER, a 24 year old clerk in Salzburg for the Vienna City Insurance Co., was sentenced to ten months in the penitentiary. The others, who had already served some time in the police jail, got lesser sentences: RSÖ group leader Johann Eichinger, a 27 year old clerk for the Salzburg Savings Bank, got four months in the penitentiary (making for ten months in jail altogether) and the 20 year old clerk Franz SCHMIDHAMMER got five months (making nine months in jail). The verdict stated that on May 1, 1936 SCHMIDHAMMER had taken part in a leafleting and slogan painting action and had supplied rural sections of the RSÖ with printed materials.

The men jailed lost their jobs and thus their livelihoods under the precarious economic conditions of the 1930s. Among the twenty volunteers who joined the International Brigades in the Spanish Civil War from the city of Salzburg in 1936/37 were three of the persecuted Revolutionary Socialists from Salzburg: Johann Eichinger, Walter HINTSCHICH and Franz SCHMIDHAMMER. In June of 1937 they traveled together to Spain via Paris. They joined the Austrian »February 12, 1934 Battalion of the XI International Brigade and fought against the Fascist forces of General Franco that were supported by the armed forces of Italy and Germany – their last fight together was in the Battle of Teruel, which ended in a defeat for the Republican forces in February 1938. The 26 year old Walter HINTSCHICH was wounded at Teruel on February 22, 1938 and died soon after in an unknown hospital, while the 21 year old Franz SCHMIDHAMMER, who was also wounded, died in the hospital at Murcia on February 24, 1938. Their graves lie in Spanish earth.

»Walter Hintschich / 1911 fallen 1937«: this inscription can be read on the gravestone of his parents in the Gnigl cemetery. Walter’s younger brother Franz was killed in a mountain accident in 1968. There is a war memorial in the Gnigl cemetery with the names of German Army soldiers killed in WWII that includes the both younger brothers of Franz SCHMIDHAMMER. His older brother Roman was a railroader and member of the Communist resistance against the Nazi regime who lived through the liberation in 1945.

Johann Eichinger, the former group leader of the Revolutionary Socialists in Salzburg, survived the fighting in Spain and was incarcerated in Saint-Cyprien, Gurs and Paris before being sent to the police jail in Salzburg in February 1941. Later he was put in a German army punishment battalion. He survived the terror years and returned to Salzburg where he joined the Communist Party and was active in the Communist world Federation of Trade Unions. His sister Margarethe was the wife of State RSÖ leader Josef PFEFFER, who was murdered on January 28, 1945 at age 33 in the Sachsenhausen concentration camp. A Stumbling Block was laid in his memory in Salzburg-Maxglan in August 2008. Stumbling Blocks will also be laid for the Spanish Civil War fighters from Salzburg who were murdered in the concentration camps. 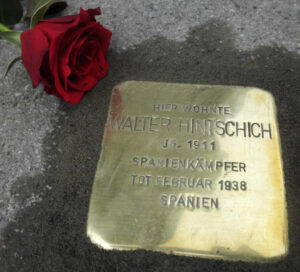 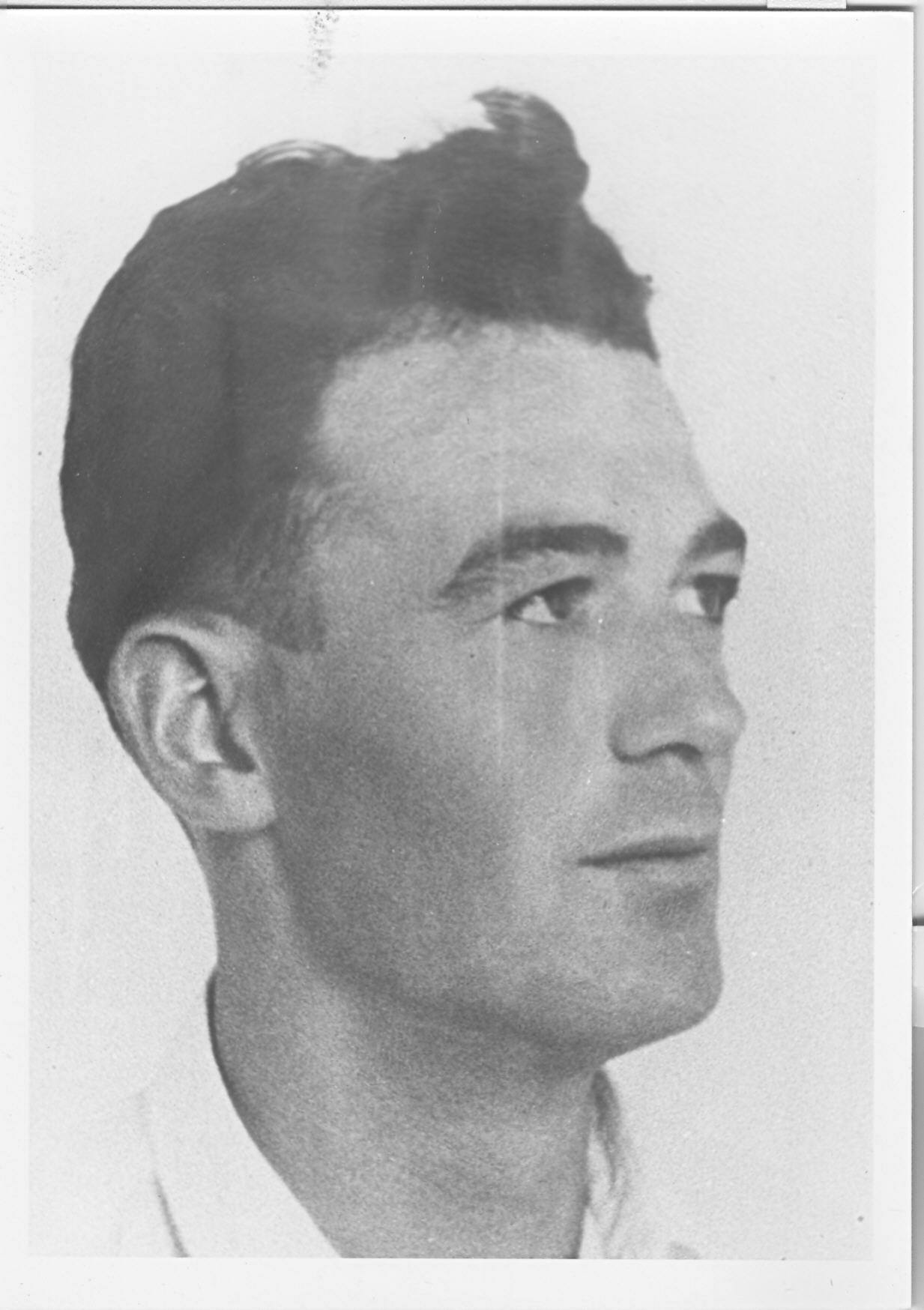 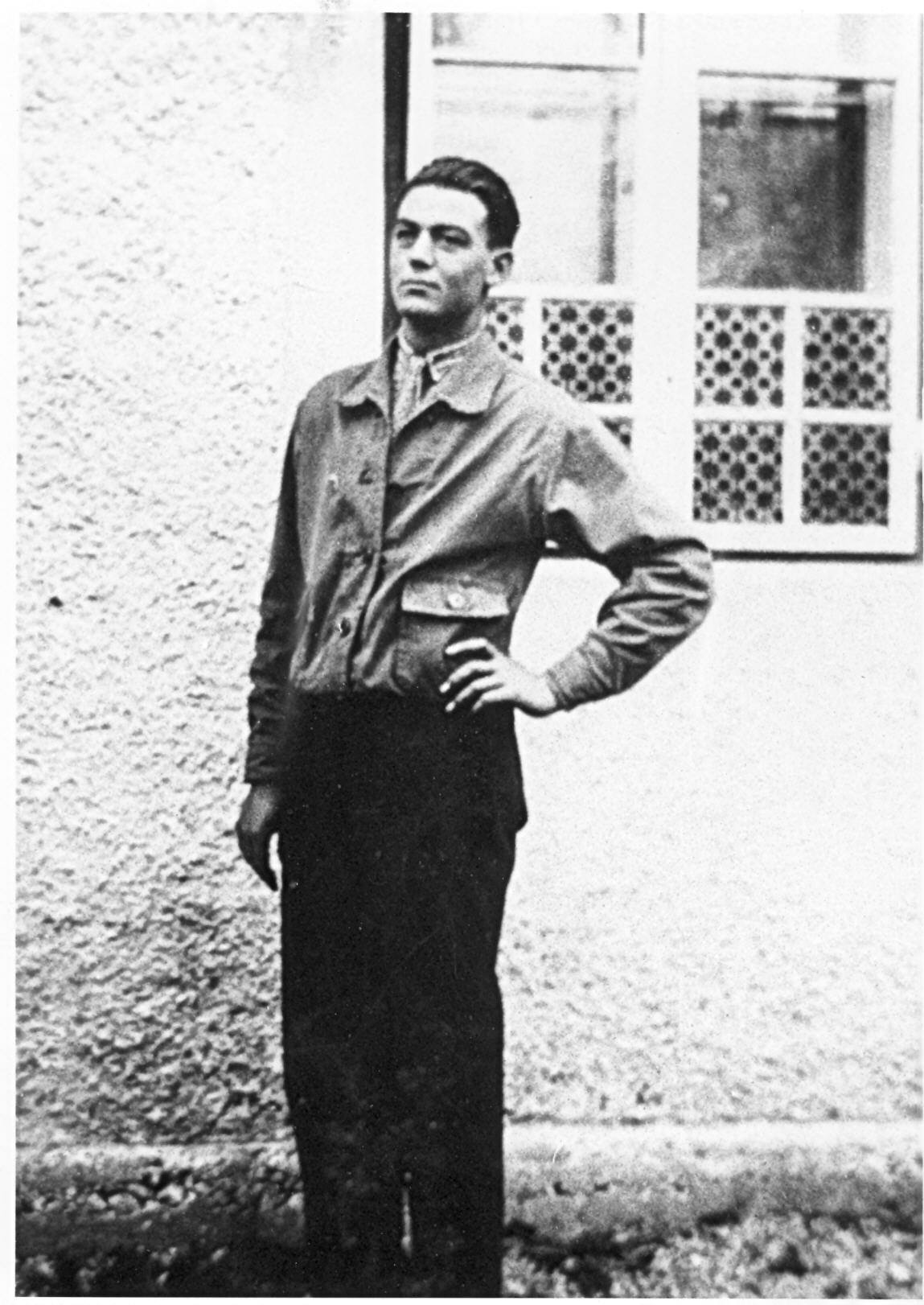 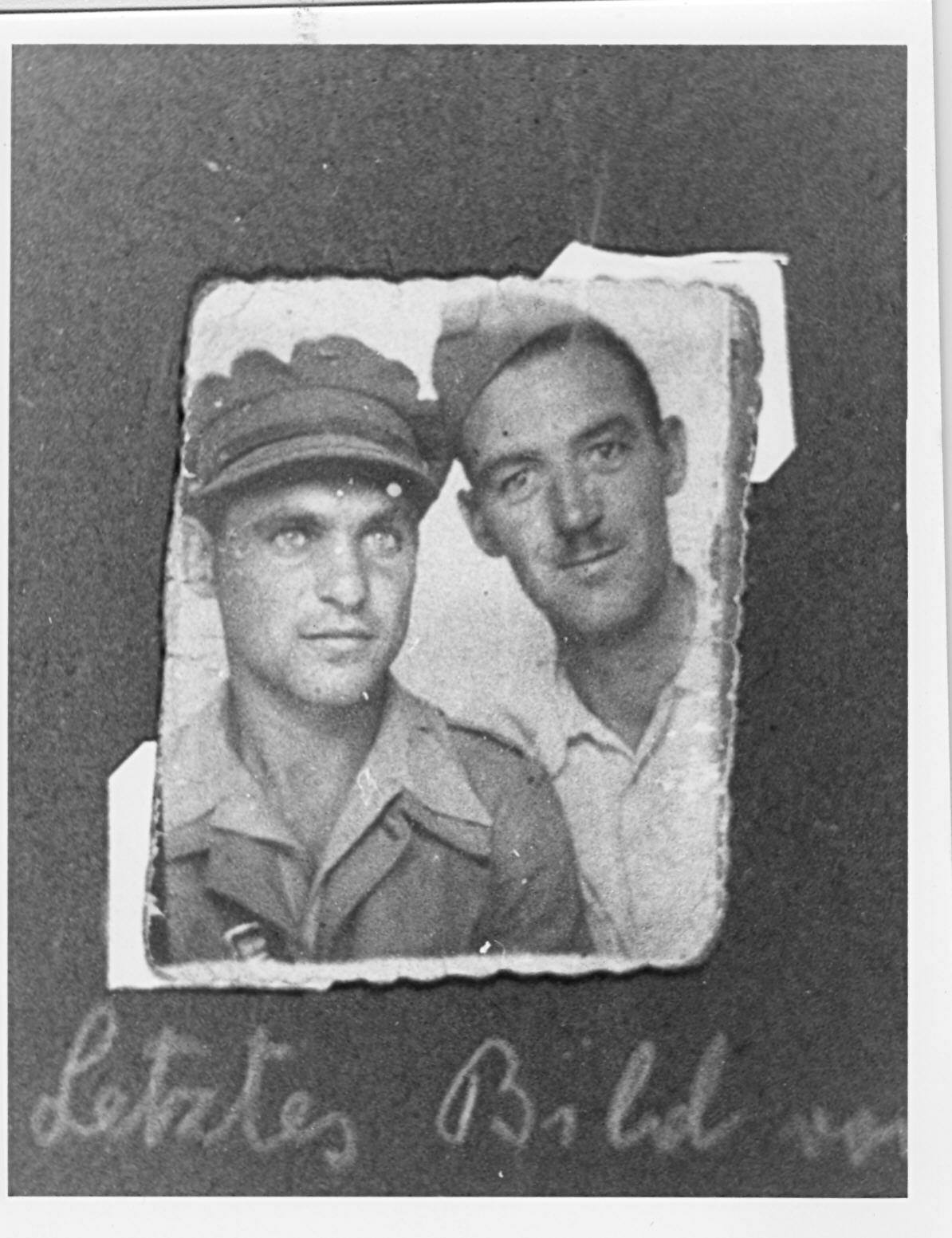 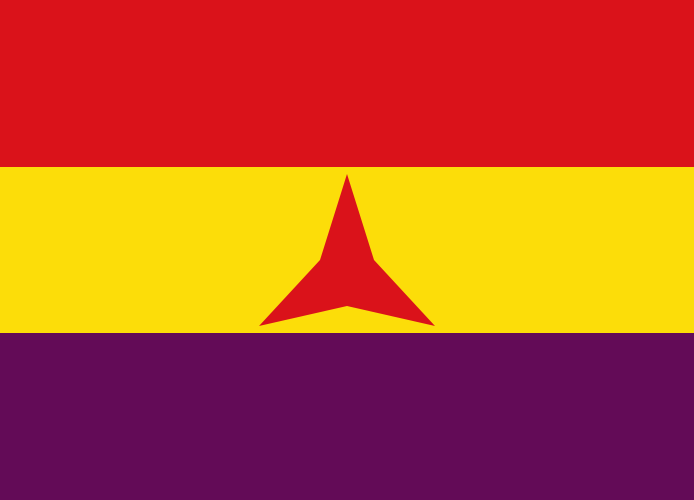 Banner of the International Brigades 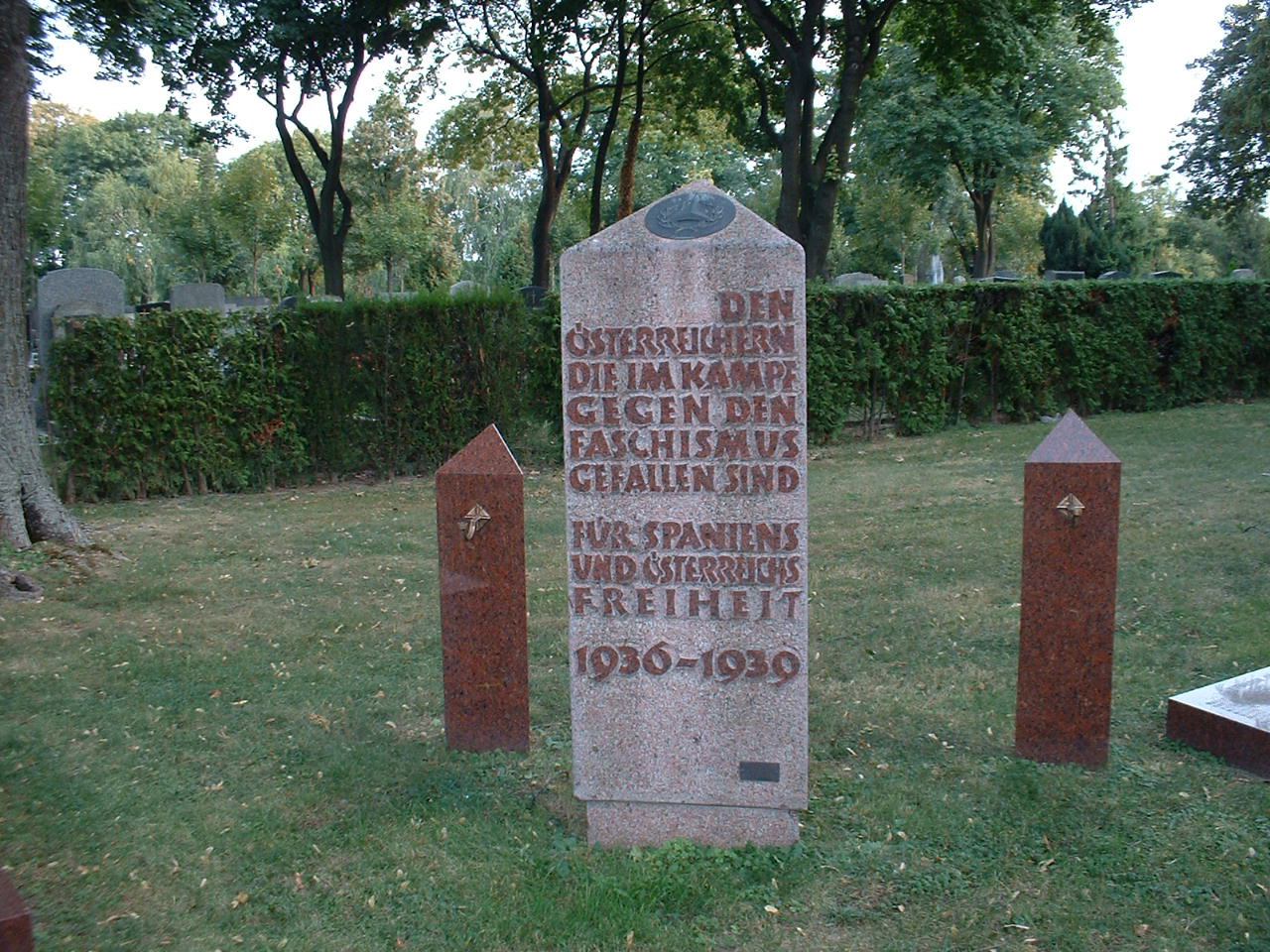 All stumbling stones at Ignaz-Härtl-Straße 11