Josef MACKINGER was born in Kirchberg bei Mattighofen (30km from Salzburg in the Innviertal of Upper Austria) on March 12, 1892. He was a married railroader whose railroader son was also named Josef and who had been born in Seekirchen in 1922. In 1933 the family moved from Seekirchen to Gnigl (which became part of the city of Salzburg in 1935) and lived at what was then 67 Linzer Reichsstraße and is now 11 Amselstraße.

Josef MACKINGER was a Social-democrat and trade unionist until all labor organizations were banned by the Austrian dictatorship after the short civil war of February 1934. He worked in the railroad boiler house and in the fall of 1939, after the beginning of the Second World War, he joined the illegal Austrian Revolutionary Socialists organization (RSÖ) whose Salzburg branch had been reactivated by Engelbert WEISS. Until the end of 1941 Mackinger seems to have paid monthly dues of one Reichsmark, most of which went to support the families of fellow workers impoverished by their arrest or made needy for other reasons — an act of socialist worker solidarity that the Nazi regime called Communist and identified with the outlawed »Red Aid« organization of the illegal Communist Party.

With the help of an undercover investigator from Bavaria, the Gestapo was able at the beginning of 1942 to round up the Revolutionary Socialist’s resistance group led by the railroader Engelbert WEISS. About 85 RSÖ members were arrested from the city and state of Salzburg, mostly railroaders. Although they had neither used weapons nor attempted to commit sabotage they were all charged with »conspiracy to commit treason« and three of them were sentenced to death and executed: thee railroaders Engelbert WEISS, August GRUBER and Anton GRAF. Nine other RSÖ-members from the city and state of Salzburg lost their lives in concentration camps or prisons and another died from his mistreatment after the liberation of Salzburg.

Josef MACKINGER, who had been arrested by the Gestapo on June 15, 1942, was deported to the Dachau concentration camp on June 21 and was registered there as »protective custody prisoner« Nr. 30534. On May 27, 1943 he was transferred to the jail of the Salzburg State Court. On October 5, 1943 he was put on trial along with other Salzburg railroaders before the Vienna Superior court sitting in Salzburg. He was convicted of »conspiracy to commit treason via his contributions to the Red Aid of the RSÖ« and sentenced to three and a half years imprisonment. On January 8, 1944 he was transferred to the Bruchsal prison near Karlsruhe. The 52 year old prisoner died there on December 16, 1944.

His widow Josefa, who received notification of his death on February 8, 1945, was entitled to victims’ compensation in liberated Austria but her travails weren’t over: her younger son Josef, who was a railroader like his father died a few years later at age 27. Josefa herself lived in Salzburg until her own death at age 76 and was survived by her older son Leopold Wally — a son that she had brought with her into her marriage with Josef MACKINGER. 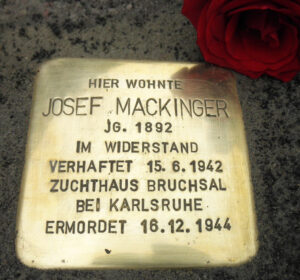 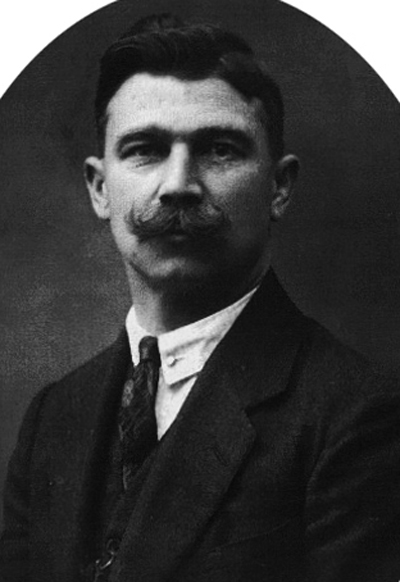 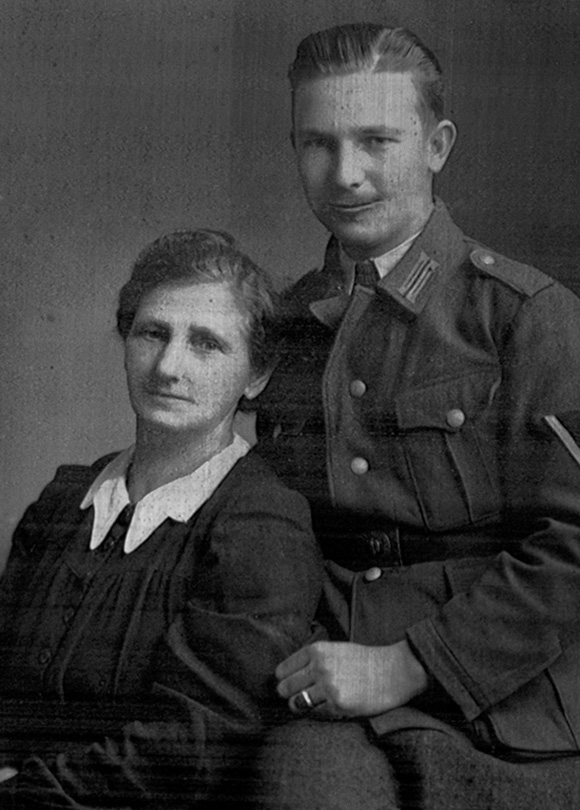 All stumbling stones at Amselstraße 11